Guest Travellers Annie and Andrew Hilliard are both in their late 50s and have a love of “our great Australian country”.  They both planned, many years back, to “retire” early so they could spend more time exploring those parts of Australia that are a long way from their home town of Lara, near Geelong, in Victoria. After many years of caravanning and camping, they were on a trip in the Kimberley with their caravan and looked down a four-wheel-drive (4WD) -only track and decided they needed to do some more remote travel while they were still young enough to enjoy it safely. By the time they had arrived back in Victoria, Andrew had decided to buy a ute and set it up with a slide-on camper which meant very few restrictions on where they could travel.  “We intend doing lots of travel to the many places Australia offers for those prepared to upgrade from 5-star to million-star (camping) accommodation”, Andrew says. Let’s join them on their rugged, star-studded adventure… 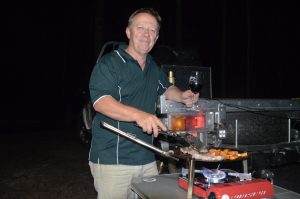 Andrew Hilliard. After a day of exploring the sights of Fraser island there is nothing quite like a quick cook up and red wine to finish the day. (For good reason no open fires are allowed on Fraser Island.) 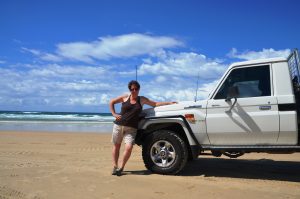 Annie Hilliard. Just checking out the pristine beaches.  (Take out everything you bring in.)

April 2016 found us travelling the Newell highway to the Sunshine Coast to collect our Trayon slide-on camper.  After spending a morning with the manufacturer to have the camper fitted and receive instructions on its proper use, we headed for the most natural place for a four-wheel driver to head to try out their new home: Fraser Island.  Catching the barge over from Hervey Bay to Wanggoolba Creek, we wondered how different it would be, as it was some 25 years earlier we had visited Fraser for the first time. 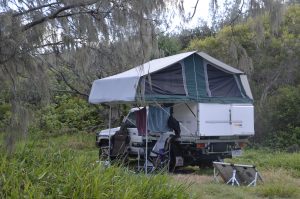 By travelling outside of school holidays and weekends, it is not hard to get a whole camp area to yourselves nestled back into the sand dunes.

As this was our first trip with the Trayon and was just a short shakedown to make sure everything was working properly before we headed south, we took the conservative approach and spent the first two nights at Central Station camp ground.  It was there we noted the first major change.  The camp ground is surrounded by a dingo-resistant fence and specially designed grid to keep these magnificent animals and humans separated. 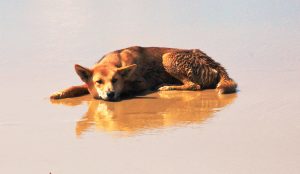 Chilled-out dingo on the beach.

On our first trip many years ago, we saw the dingoes rummaging through eskies looking for food.  Sadly, over the years, too many people have both deliberately fed or lazily left food out so that it could be found which has led to aggressive behaviour among dingoes, in some cases. 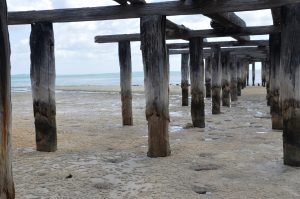 Travelling outside of school holidays, we had the opportunity to move down for some beach-side camping, later in our trip.  It was this part of the trip that really brought home the beauty of this magnificent island.  We camped alone in a designated camp area that in holiday season would be packed.  Magnificent sunsets, gentle sounds of the ocean and the odd dingo howl. 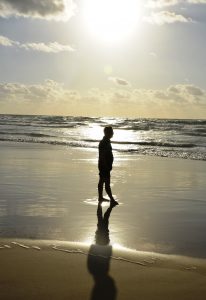 A quiet beach stroll at the end of the day should be on your list of things to do.

During an evening stroll along the beach, one of the Rangers on a last patrol of the day along the beach suggested we remain vigilant for a couple of aggressive dingoes in that part (the camp area was not fenced off, like some of the other areas).  It was suggested a sturdy walking stick might be the go.  I love Dingoes as they are a beautiful animal but, sadly, when man interferes with Nature, then the behaviour can change. 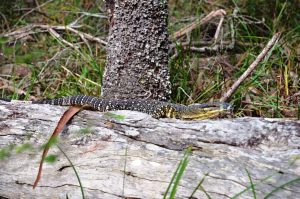 Firstly, just do it. 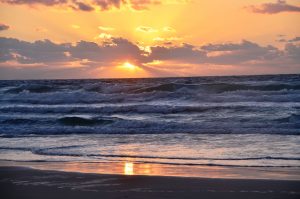