Catriona Rowntree shares some of the highlights from the final leg of her trip to ‘the end of the earth’ with Getaway and Scenic. 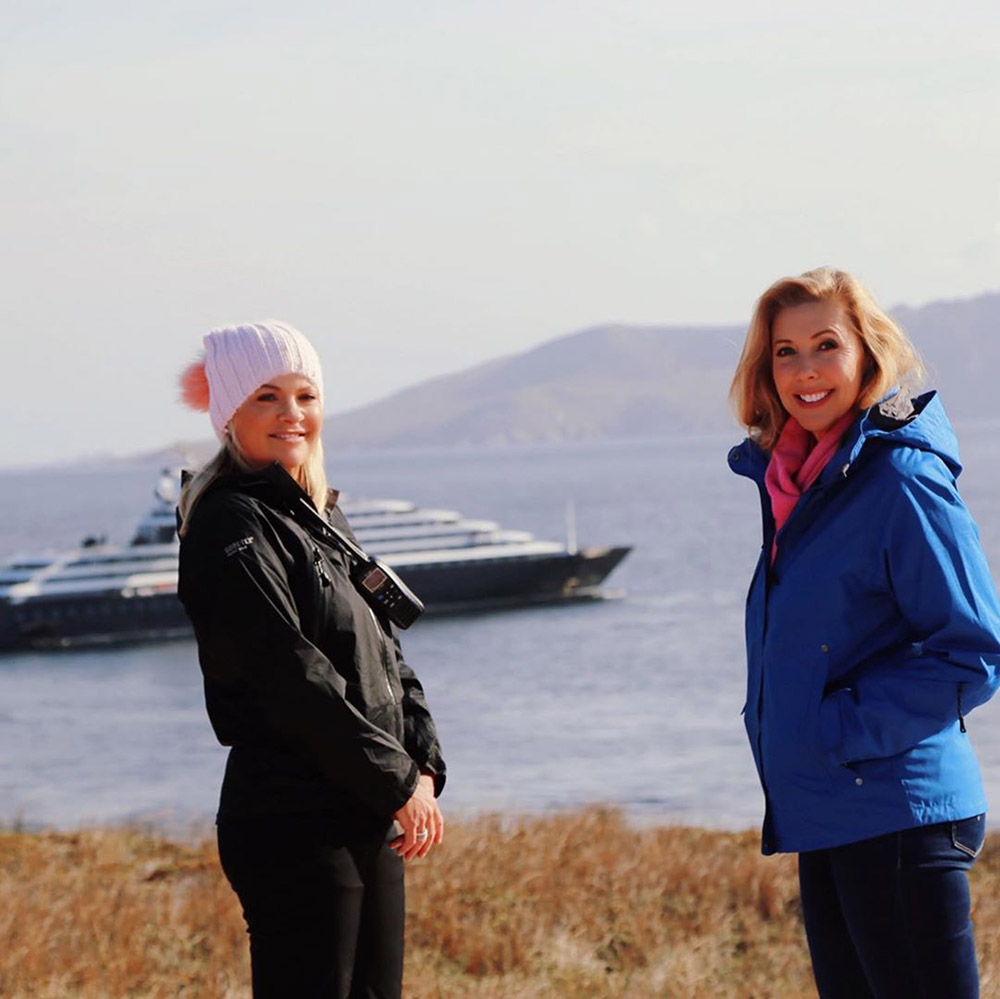 Catriona the stow away

Psst, can you keep a secret? I’m thinking about stowing away with Scenic and not heading home. I’ve got a plan, I’m going to ask if I can become a ‘Discovery Team’ member. This small group of experts onboard have all made their passion their profession, which I gather has to end in ‘ologist’. So, marine biologist, geologist, I’ve even met a glaciologist. I think I’ll be a ‘Chatologist’ and teach passengers an ancient Rowntree women’s trait to talk non-stop without appearing to breathe. I’m a shoe in. My kids will be fine, I’ll post LEGO home at each port and my husband will have me replaced with an ‘Acre Chaser’ who can cook, in no time. I’m excited, what do you think of my plan? Wanna come with me?

The legend of the gold earring

Well you didn’t think I’d travel all the way to the edge of the earth and do a straight shot? C’mon. Cape Horn gets about five sunny days a year and today we jagged one (I swear I’m the luckiest person I know 😉). What amazed me about this rocky outcrop island, at the centre, called Isla Hornos, an island beaten senseless by the Furious Fifites winds, is that there’s a family who live here for months on end in the lighthouse…and they’re ridiculously happy! They paint, the children do ‘school of the air’, they sell painted rocks to travellers like me, there’s not an iPad in sight…and they’re happy! Anyway, I also learned today that sailors who successfully rounded Cape Horn, long before the easy days of The Panama Canal, were allowed to wear a gold hoop earring, in the ear that passed closest to the island. Hence everyone would know you were a dead set legend. This spurned the myth of pirates wearing a gold earring. So, I s’pose Jack Sparrow ‘rounded Cape Horn’. There’s over 1500 shipwrecks in these waters, thousands of lives lost. In 1992 an Albatross Sculpture was erected right on the peak, to honour those brave lost souls, with a poem by Chilean poet Sara Vial, at its base, that’s so beautiful I wanted to share it with you. ‘I am the albatross that awaits you at the end of the world, I am the forgotten soul of the dead seafarers, who passed around the horn, from all the seas of the world. But they did not die amongst the furious waves, today they soar on my wings to eternity, in the last grip of the Antarctic winds.’ Trust me, on this lonely island, looking out to those waters now known as ‘the sailors graveyard’, I dare you to not be moved. 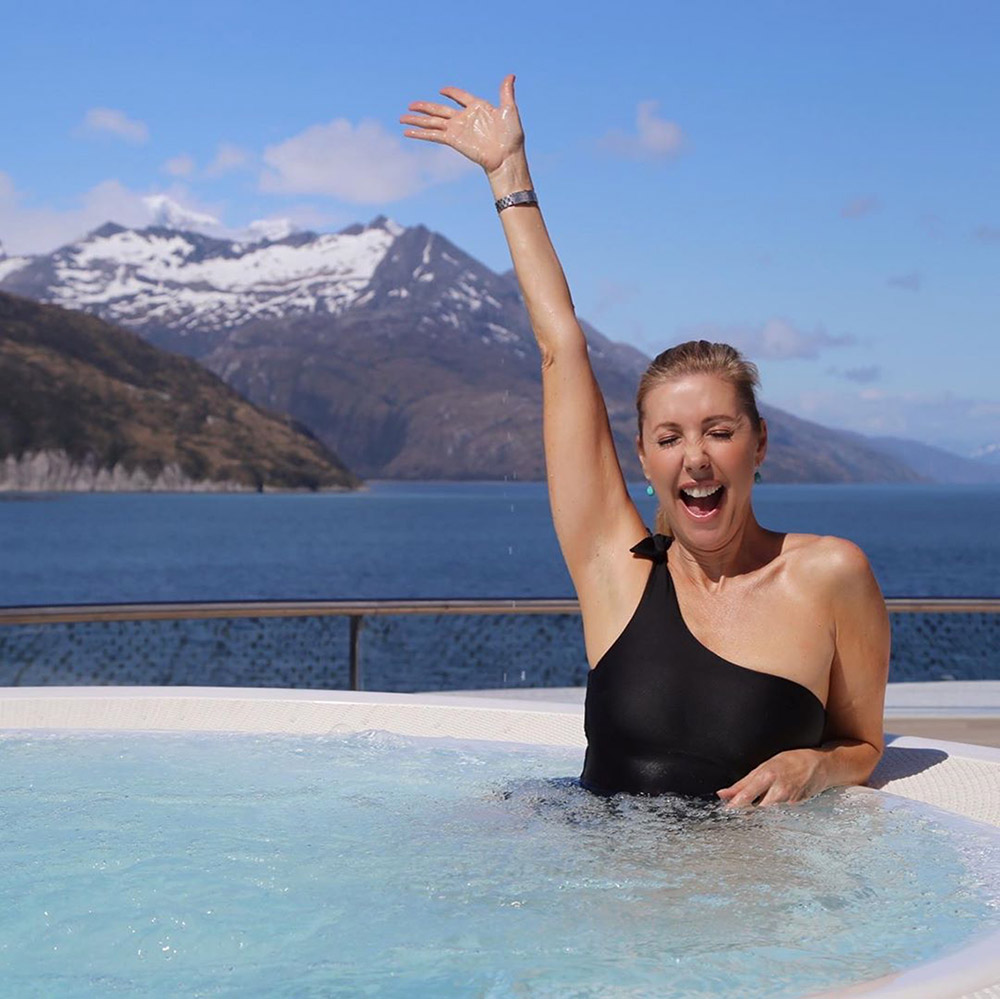 Hot tub with a view of the glaciers

Giddy over glaciers! Today the Tierra del Fuego weather gods smiled on us and we milked all we possibly could from these glorious fjords. Starting at dawn with Garibaldi, a thumping big U Shaped glacier that thundered, banged and had a good ol’ rumbling chat to us, we were surrounded by what’s called ‘bergy bits’, I love them, icy remnants of the glacier that you follow to the source. We then hit the jackpot of The Beagle Channel. This is not just one glacier, oh no, but a whole Avenue of Glaciers! Beginning from the gigantic Darwin ice field, you have a series of glaciers powering down to the waters edge, boom boom boom. Do you remember HMS Beagle? This was a ship commandeered by the very handsome Australian Commander Philip Parker King (PP to his mates) that had its first hydrographic survey trip through here in 1826-1830. On the second voyage a young man called Charles Darwin paid for himself to join as a supernumerary, but his passion was as a naturalist. He published his journal of this trip and later gave the world his Theory of Evolution. Travel can inspire so much. When he first saw these glaciers he said ‘It is scarcely possible to imagine anything more beautiful than the beryl-like blue of these glaciers, and especially as contrasted with the dead white of the upper expanse of snow.’ Bet those boys would’ve loved a hot tub on the top deck… 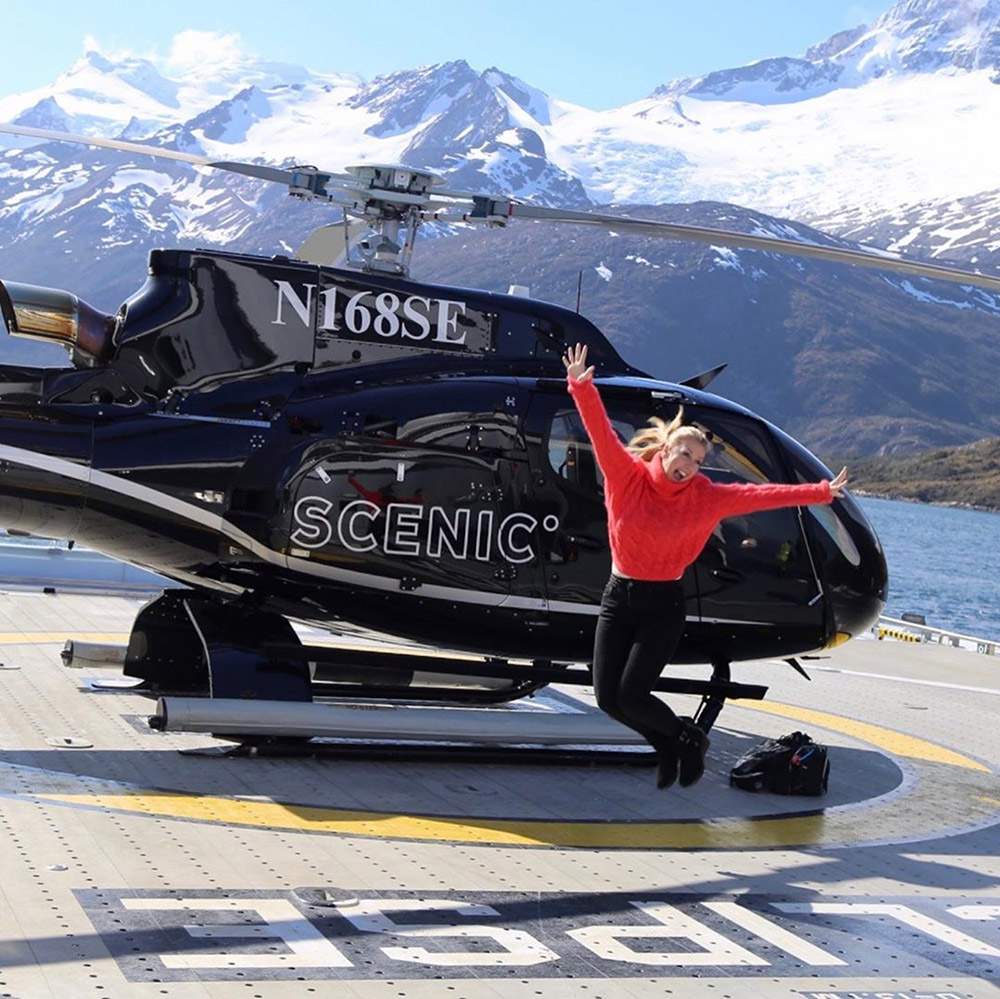 A final jump for joy

A final jump for joy from the glaciers, that’s a wrap from the end of the world, Chilean Patagonia. Did you enjoy the trip? I’ll admit I’d not heard about the Chilean Fjords before coming here and now wonder ‘why isn’t everyone coming here?’ I can’t stop thinking about the bravery of those Magellanic penguins travelling all the way from Brazil, imagine out-swimming an Orca. The courage of the sailors discovering these mysterious worlds with their terrifying seas, to source us spices, food and clothing. What about Darwin and his Theory of Evolution; the hardworking locals; don’t ever call a Chilean woman lazy and never say no to a potato! Many of you will know I’m here during ‘an exciting time’ for Chile as they are going through ‘a manifestation’. I won’t get into the politics, apart from the fact this isn’t political, they hate both the left and right. But it won’t help a mother feed her children and tourism dollars certainly will. So, aside from seeing graffiti and 2 quiet, walking, street demonstrations, we were totally safe. I wouldn’t advise you otherwise. We loved every moment.

Former beauty queens use travel to educate and inspire

The natural beauty of travel