As this week’s Guest Traveller, Journeys to Come’s Jack Walden shares a highlight from a recent trip to Rome: A Roman Food Tour.

As a lover of history, breathtaking sights, and traditional, full-flavoured Italian food, I fittingly found myself in the Eternal City – Rome. I plunged right in and absorbed that culinary city’s flavours while on the ‘Jewish Ghetto and Campo De’ Fiori Night Food Tour’ – a passeggiata for my tastebuds, which also fed my hunger for history. 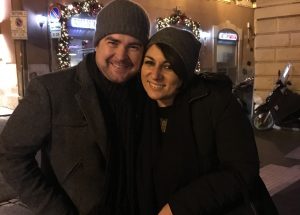 Jack and his tour guide Roberta.

This is a dining and sightseeing experience, and an exceptional way to explore Rome at night by foot, discovering the city’s history, while indulging in glorious Italian food. We were accompanied by a dedicated and knowledgeable local tour guide, Roberta, who enhanced the pleasurable evening stroll through this food heaven.

Sustenance for this leisurely trek wasn’t a concern because we stopped to sample all of the delights. SOOOO much food! All that was missing was an adorable Italian nonna pleading with us to “Mangia! Mangia!”. Encouragement to eat wasn’t necessary as we happily sampled the limitless variety of delicacies. 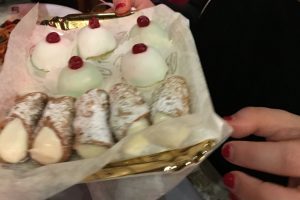 We started with some light snacks in a Jewish Deli, then antipasto and pizza in a busy bakery, followed by pasta with a side of pastries called Saint Agatha’s Breasts [Le minni di Sant’Agata]. The finale was an AMAZING tiramisu at a place dedicated to this renowned dessert. I LOVE tiramisu, so this creamy mocha marvel was a fitting finish! 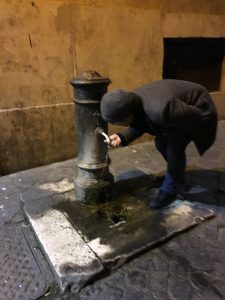 Rome’s streets are scattered with flowing water fountains, so we gathered and sampled the local acqua from one of them. Our thirsts quenched, we continued as there is so much to discover on a food tour of Rome. My favourite historical gem, revealed by our guide, was a restaurant that had one of the original theatres of Rome in its basement. While excavations were taking place to build a wine cellar, the remains of a theatre were found! So you can now eat in the same space where actors would have performed in times past.

As a person who LOVES coffee, Italy is the place to be! As part of the food tour, we stopped at a charming, traditional espresso bar. This was another highlight. I really do appreciate how in Italy you stand at the bar, have a quick coffee, and move on. No lingering over your latte here! 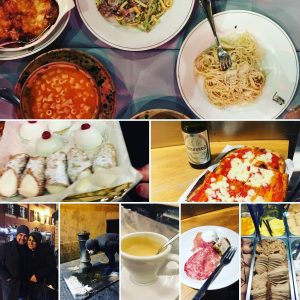 I was travelling by myself, so joining a small group of people was a perfect way to explore the city at night. I met a lovely family (mum, dad and their two adult daughters) who were on the tour with me. We shared visiting sites like Campo de’ Fiori, Piazza Farnese, Piazza Navona, and the Jewish Ghetto, where Julius Caesar met his death.

The tour company itself was great. They were very accommodating, particularly as they made it possible for me to rush back from my day trip to Pompeii. They didn’t mind that I was running a little late.

This food tour is the perfect way to explore Rome at night. When our jaws weren’t dropping while marvelling at the majestic night-lit sights, they were busy chewing mouthfuls of gastronomic joy!

Stay, play & satay in the heart of KL