When Guest Traveller Charlotte Francis visited the Netherlands in October to attend the International Fundraising Congress, she jumped at the chance of spending a long weekend in Amsterdam. Having travelled widely, but remaining a Europhile at heart, Charlotte found Amsterdam packed with interest and visual delight. Charlotte is a fundraiser, story-teller, writer and blogger with a knack for seeing the funny side of life. Her blog  thisquirkylife.com celebrates her travels through life as she explores new places, things, ideas and ways of experiencing the world. Let’s follow British-born, Melbourne-based Charlotte as she navigates the canals, bicycles, markets and much more in a city considered one of Europe’s most liberal-thinking and tolerant capitals… 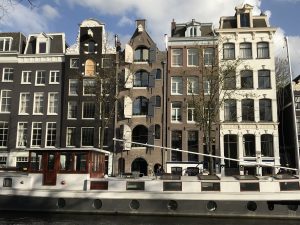 Gabled houses of Amsterdam on one of the canals. 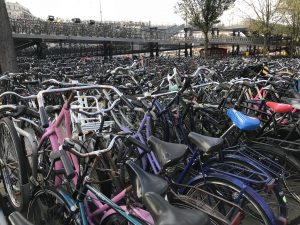 I arrived in Amsterdam with, annoyingly, a nasty sore throat so spent the first day wandering from café to café drinking lemon and ginger tea – a potent infusion of large chunks of ginger and lemon on a bamboo skewer, soaking up the gentle autumn sun, people- and dog-watching. I was happy to be in the heart of the city centre in the Jordaan district. Threaded through by canals, flower-decked barges and criss-crossed by bridges – not for nothing is Amsterdam known as the Venice of the North – the Jordaan used to be a poor area, overcrowded and insanitary, but now warehouses and buildings once crammed with inhabitants have been transformed into elegant houses, restaurants, cafes and eclectic shops – from designer clothes to antiques, jewellery, interiors, stationery, books, fabrics, organic food and more. And you can’t help catching wafts of marijuana from some of the coffee shops – I did wonder if a puff or two might deaden my sore throat but instead accepted a slug of vitamin C-packed homemade rosehip puree from a gentle hippie I met at one of the cafes. That’s one of the things I love about Amsterdam, it has a history of openness and tolerance – not just hash cookies with your coffee but dogs off leashes and cyclists without helmets all adding to the cacophony of noise, movement and mayhem in the narrow canal-lined streets. This is a city in which there are almost more bikes than people – I nearly got mown down several times! You can easily hire a bike but Amsterdam is also a great city to explore on foot. 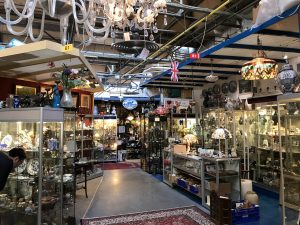 I purchased a moss-green pre-loved cashmere jumper in a vintage shop and then, to my delight, stumbled on the Antiekcentrum, the largest indoor antiques market in the Netherlands, in Elandsgracht, the same street as my Airbnb accommodation. As a born fossicker, I lost track of time among china, ceramics, silver, brass, glass, gold, paintings and all sorts of rare and unusual collectables from pistols to clocks and watches, paper weights, vases, tableware, snuff boxes and manicure sets. 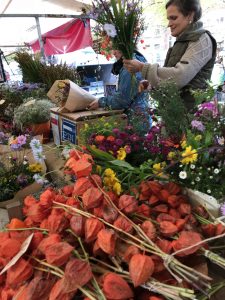 On the Saturday morning I headed off to the Noordermarkt, a vibrant farmers’ market just by the Noorderkerk (the 17th Century Protestant Church).  The produce is not only mouth-watering – I almost managed to make a meal out of all the different cheeses, fruits and meats I snaffled – but most of it is biodynamic and locally sourced.  Tapping my feet to live, gypsy-violin music in the background, I also browsed the bric-a-brac, crafts and second-hand clothes before lunching on a freshly prepared pancake (a must-eat in Amsterdam). 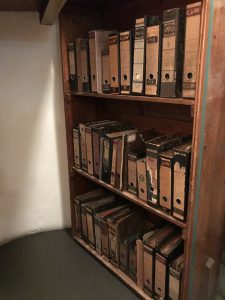 A book shelf in Anne Frank’s House in the Prinsengracht.

It’s not far from the Noordermarkt to Anne Frank’s House in the Prinsengracht. While it is extremely touristy – think shuffling along in a long line – it’s well worth making the effort.  Although no furniture remains – it was all taken away when the family were arrested in 194­4 –  the few rescued belongings and photos belonging to the eight people hiding in the Secret Annex give you an insight into what life must have been like in captivity, and yet how extraordinarily resilient they were and how they maintained a semblance of normality in such cramped living space.

My next stop was the Begijnhof, a series of alms houses grouped around a courtyard dating from 1465, and once home to a Catholic order of pious, unmarried or widowed women who did good works without becoming nuns. House No. 34 is the oldest house in Amsterdam and one of only two remaining wooden houses in the city centre. I loved this story of medieval girl power and how these plucky women resisted conversion to Protestantism in the late 1500s. A little oasis of peace in a busy city – the Bejinjof is in the centre of Amsterdam between Kalverstraat and Spui. 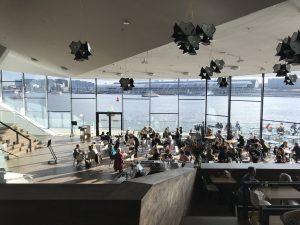 EYE Restaurant at the EYE Film Institute, a museum and archive of Dutch and international films.

For a complete change of scene, I took one of the free ferries across the River IJ from behind the Central Station to Amsterdam Noord, a revitalised riverfront area. The EYE Film Institute, a museum and archive of Dutch and international films, is a modern geometric building overlooking the water. Lunch – delicious roast beef salad and rye bread – in the terraced restaurant with river views (not quite the Sydney Opera House but the same kind of concept) was my first stop before exploring the permanent exhibition documenting the history of film and film-making. Fascinated by the progression from early cinematic devices such as dioramas and zoetropes through to today’s digital media, I then watched part of a vintage German film in a small cosy booth before exploring the panoramic 360-degree room where film clips explore themes such as slapstick, celebrity culture and voyages of discovery.

I had visited the Rijksmuseum back in the 1990s and with time limited, decided to focus on just one of the galleries in the Museum Quarter. Having seen Van Gogh through the seasons at Melbourne’s NGV in the winter, a trip to the Van Gogh Museum was the perfect segue. From his self-portraits to his peasant pictures, almond blossoms and highly emotive pictures of waving wheat and blue skies painted during his time in the South of France, it was a delight. The permanent collection is arranged chronologically on three flours with the paintings interspersed with drawings, letters and audio transcripts of his journals documenting his emotional turmoil and artistic challenges.  Extraordinary to think that his art was barely recognised in his life time – his sister-in-law, his brother Theo’s wife, was instrumental in preserving and promoting Van Gogh’s work. Thanks to her, we can enjoy his evocative paintings. My all-time favourite is the sunflowers – how he achieved the shimmering gold effect using just three tones of yellow is beyond my comprehension.

Charlotte’s Top Five Tips for Getting the Most Out of Amsterdam:

All photography by Charlotte Francis.

A positive step for tourism