Guest Traveller Geoff Wickham, a retired firefighter and skilled photographer, and his wife Jennie embarked on a 20-day expedition aboard the small, 1,700-tonne, Russian ship ‘Professor Molchanov’. They travelled from Ushuaia, Argentina, to the Antarctic Peninsula, South Georgia, and the Falkland Islands and enjoyed shore excursions providing plenty of up-close encounters with local wildlife. They also appreciated the fact that the ship had just 48 passengers and six Zodiac inflatable boats as this permitted relaxed disembarkation when landing at points of interest. The relative barrenness and isolation of Antarctica, which is a continent of rock, ice and snow, devoid of any trees or grass, was another point of interest for the couple, who hail from leafy Melbourne. Let’s join Geoff and Jennie as they come extremely close to exotic wildlife, survive slightly perilous Zodiac landings, and soak up ‘south pole’ history studded with extinct whalers, and heroic explorers… 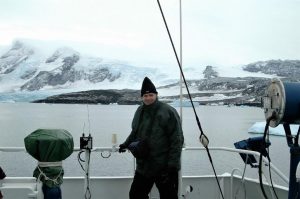 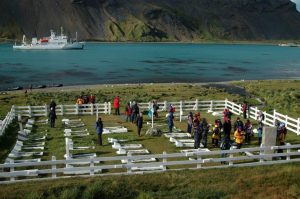 Antarctic explorer Ernest Shackleton is buried at Grytviken, a settlement on the island of South Georgia, part of a British Overseas Territory in the South Atlantic. Note that Shackleton’s grave lies south/north, while other graves lie east/west.

The most convenient way to get to Antarctica is by ship, from Argentina, via Ushuaia, which is the southern-most city in the world. Day one and two saw us crossing Drake’s Passage which can be rather rough because it’s where the Pacific and Atlantic Oceans meet. It was interesting to see how many seabirds, particularly albatross and petrels, followed the ship. Icebergs were sighted before Antarctica came into view, which made for more excitement as the Peninsula was not that far away. 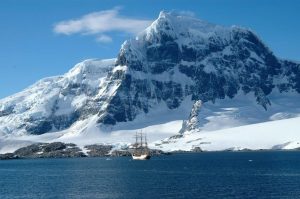 Around Port Lock Roy, which is a former British scientific station. The snow-covered hills are so rugged and scenic, it’s probably more appropriate to describe them as mountains!

At the British station, the penguins were very tame because they have no land-based predators. The only threat to land-based animals are predatory birds and the most dangerous animal on earth is man. 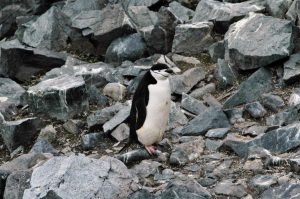 The main variety of Penguin on the Peninsula are the small birds, such as Adelie, and Chinstrap – pictured.

Whilst travelling the Peninsula, we made numerous landings by Zodiac (an inflatable boat) to Neko harbour and Paradise Harbour, along with other places of interest. Icebergs with pack ice made navigation for the ship quite tricky and demanded caution with landings. Iceberg complicate Zodiac landings because sometimes landings are made quite close to glaciers and when pieces of the glacier break off and icebergs are calved, large waves can form. [Iceberg calving is the breaking of ice chunks from the edge of a glacier.] In our case, such a wave caused a Zodiac to float free but the boat was quickly recovered.

On leaving the white continent, we moved north toward the Shetland Islands. This area is well known for icebergs becoming somewhat landlocked because of the shallow water. Our ship passed many of these. We made our way to Deception Island which is an active volcano and a disused whaling station. The ship actually anchored in the flooded crater of the volcano. 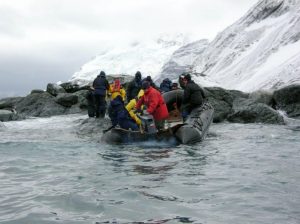 This voyage followed Shackleton’s path, on his escape from Antarctica. Shackleton lost his ship when it was crushed by ice, and he took three small boats over the ice with his crew, and set sail for Elephant Island. After some time on Elephant Island, he decided the only way to rescue his crew was to set sail in a small boat for South Georgia. He was successful in that none of his crew perished. We were very fortunate that the weather allowed us to land by Zodiac on Elephant Island, where Shackleton’s crew spent many months waiting for his return, which he did with the aid of a Chilean ship. 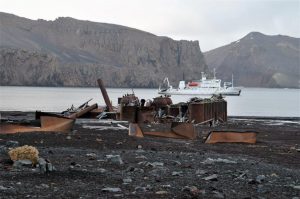 Deception Island, with the remains of the whaling station which, as you can see, was quite extensive. The tanks and everything else that was needed to process the whale, are still in situ.

From Elephant Island, we sailed from North to South Georgia, which boasts an astonishing concentration of wildlife, and awe-inspiring scenery, ranging from 7,000-foot mountains and mighty glaciers, to deep fjords and low-lying grassland. Georgia is home to King Penguins and elephant seals, along with introduced Caribou.

South Georgia’s history includes notable events such as Argentinian scrap metal merchants landing on South Georgia and raising the Argentinian flag, which eventually lead to the England-Argentina conflict; and the set up of three major whaling stations by both British (at Stromness) and Norwegian interests (at Grytviken). 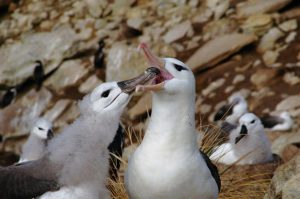 The albatross which landed right beside Geoff, feeding its young.

After leaving South Georgia, we made our way to the Falkland Islands and sailed into the harbour at Stanley. Aided by Zodiacs, we made our way ashore to sightsee around Stanley. The cruise also included landings at New Island. While on New Island, an albatross bird landed very heavily right behind me. I thought it was a passenger falling over. The albatross then disgorged a squid to feed its chick, and ran approximately 10 metres, weaving around people, to gain speed in order to take off into the wind.

Geoff’s Top Five Tips for Getting the Most Out of an Antarctic Adventure: 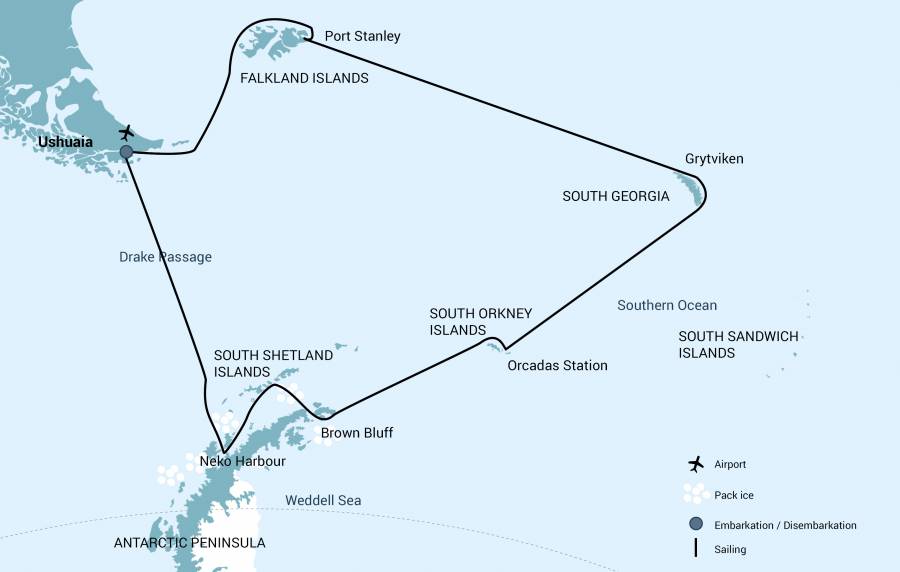 Geoff’s itinerary on board the Oceanside Expedition to the Falkland Islands, South Georgia and the Antarctic Peninsula.

I’ll take you there

Penguins: tip of the iceberg on bucket list adventure