With the Antarctic season just around the corner, Guest Traveller Liane Simpson remembers the people and penguins she met on her ‘bucket list’ adventure earlier this year.

Kevin is a macaroni penguin who, separated from his own colony, now lives with a chinstrap penguin colony on the South Shetland Islands in Antarctica. According to Franco, a retired Canadian biologist and scientific officer, “Penguin colonies generally don’t mix, but Kevin seems to have been accepted into the chinstrap colony’s fold”. Franco now works as a naturalist and wildlife expert aboard One Ocean’s RCGS Resolute, travelling regularly to both Antarctica and the Arctic region. “Every time I visit the area, I look out for Kevin to check on his progress. His distinctive head of feathers makes him easy to spot.” 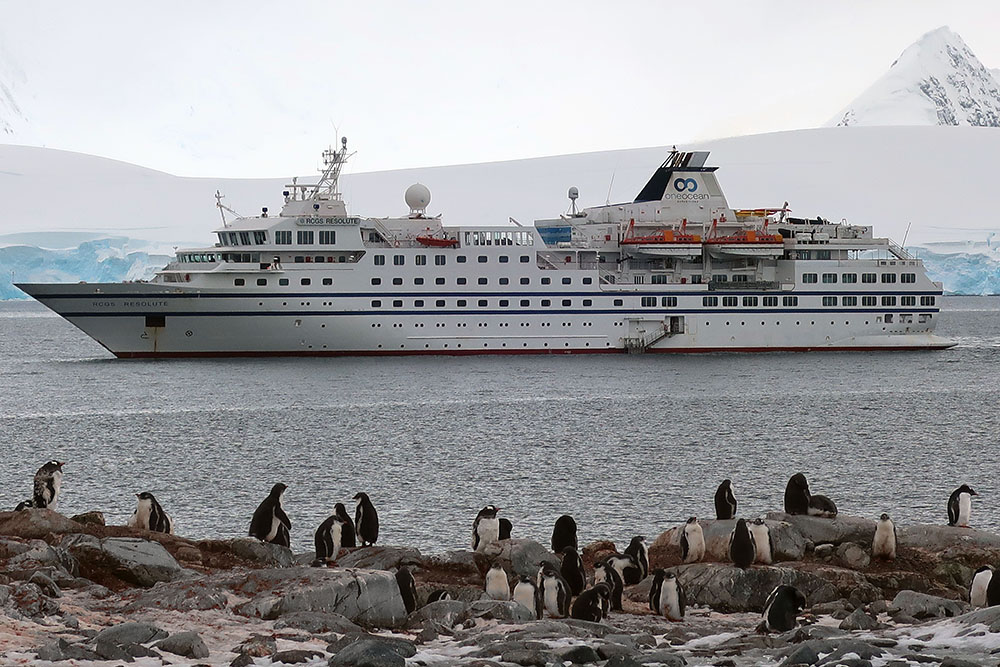 I travelled on One Ocean’s ten-night Antarctic Peninsula Expedition cruise, the last of the 2018-2019 season. RCGS Resolute, the most recent addition to the company’s fleet, departed from Ushuaia in Argentina, the world’s southernmost city. After crossing the treacherous Drake Passage, the ship made its way down what I dubbed ‘Iceberg Alley,’ aka the Penola Strait. It is fascinating to observe the different shapes and styles of icebergs. Some are almost architectural in appearance, with flat tops and sheer sides, calledtabular icebergs, resembling the ‘Ice Cube’ Aquatic Centre at the 2008 Beijing Olympics. Others resemble meringues or huge discarded dinosaur teeth. Interspersed between are ‘bergie bits’, the nickname for pieces about the size of an average car, and ‘growlers’, the moniker used for smaller chunks, from dinner plate size up to pieces the volume of the average family pet.

This is a very interactive cruise, offering frequent off-ship excursions and onshore landings using Zodiac boats, or sea kayaking for the more adventurous. Experienced staff lead hikes for different levels of ability. The ship’s team did a great job, offering the best possible opportunities for exploration, reading the conditions and changing plans when necessary. Ever at the mercy of the elements, Antarctic cruise itineraries are not an exact science. A proposed visit to an abandoned British science station, Base W, on Detaille Island, south of the Antarctic Circlehad to be cancelled due to unfavourable weather conditions. As a consolation prize, we were rewarded with the company of two whale scientists, Ari and Logan from the USA, who joined our cruise via Zodiac, delivering fascinating lectures and conducting important whale research in our midst. 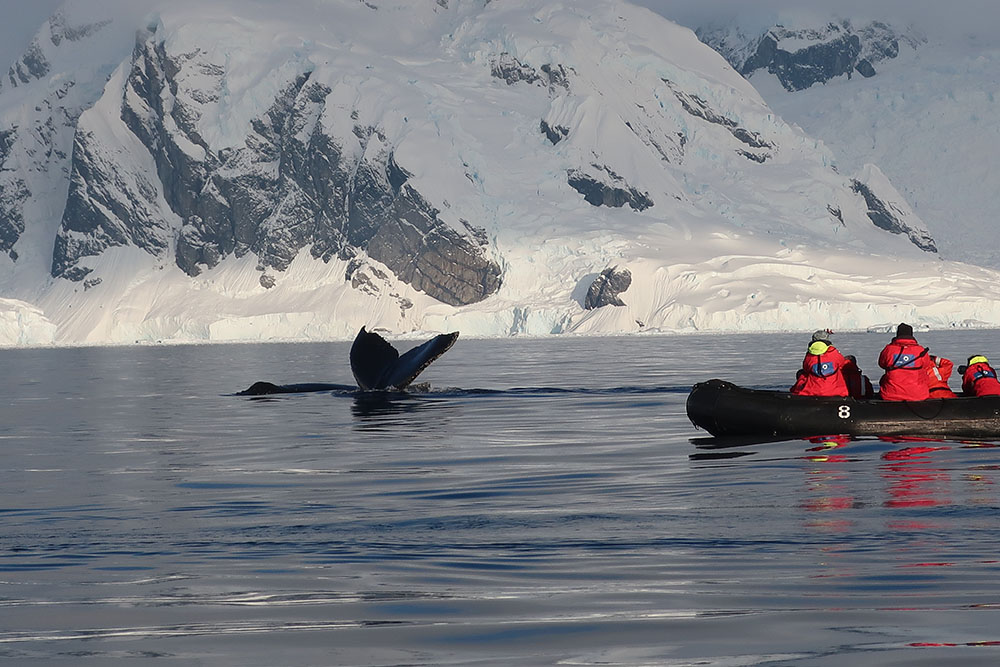 When conditions were right for our first off-ship cruise, we were called via the ship’s public address system, one deck at a time to head to the mud rooms. After donning brightly coloured, bio-secure, waterproof outer clothing and boots, the delicate process of loading the Zodiac boats began. Our experienced driver navigated a carpet of thick brash ice to get up close and personal with recently calved glaciers dotted with seals of different shades and sizes. We weaved between small icebergs to find the best vantage points for the keen photographers. 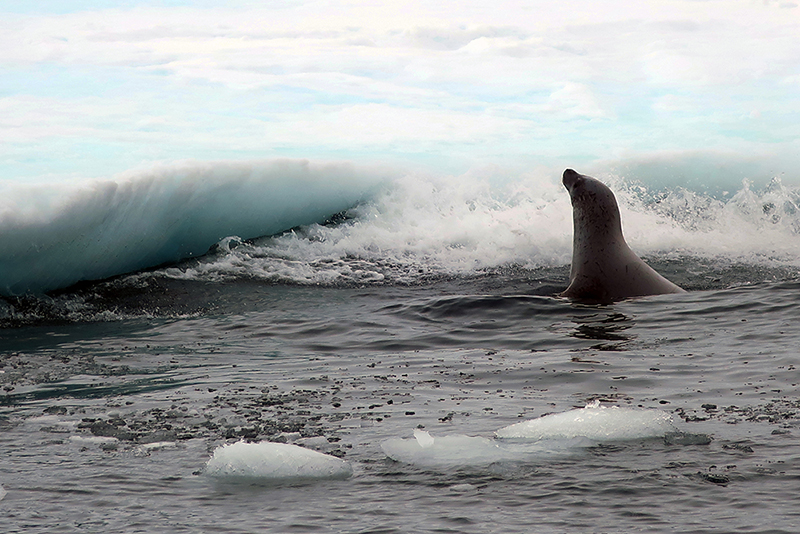 Once again thwarted by the weather, further attempts to run onshore excursions that day were postponed. However, the next day, after an exciting early morning crossing of the Antarctic Circle, complete with a fancy-dress party and choice of sparkling wine or hot chocolate with Bailey’s Irish Cream, the weather was a little kinder. The ship’s captain found a protected and hospitable location to drop anchor and launch its small craft. 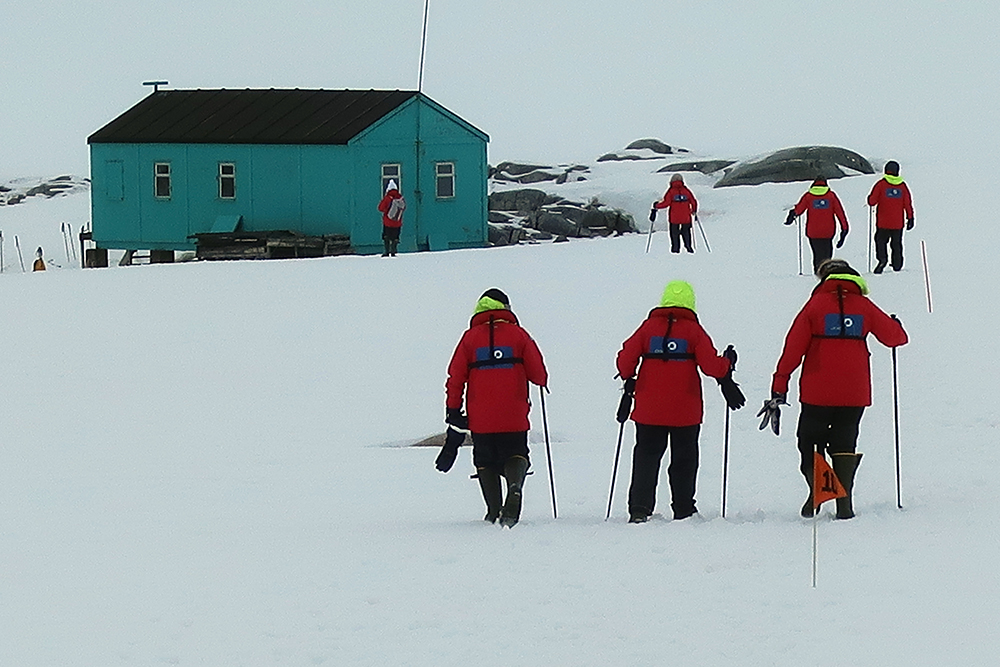 The following morning, we were cleared for a shore landing in Dorian Bay. Home to large gentoo and Adelie penguin colonies, we kept to the five-metre rule when approaching wildlife. However, it soon became clear that the penguins didn’t get the memo, as they toddled close by, oblivious to our presence. Meanwhile, kayakers paddling silently nearby provided a stunning photo opportunity; a riot of bright colour against a dramatic blue and white background. A brisk hike to historic World Heritage-listed Damoy Hut, maintained by United Kingdom Antarctic Heritage Trust, provided a stark insight into the primitive conditions endured by early visitors to Antarctica.

Once everyone was back onboard, a daily debrief provides an opportunity to share stories and photos. This pleasant interlude, with the bar staff run off their feet, was followed by a gourmet three-course dinner, or something more casual. The ship’s hospitality director, the delightful Ramona, runs her kitchens with military precision, leading a diligent staff from all corners of the planet. A former opera singer from Austria she doubles as the entertainer at the Captain’s farewell dinner on the final night.

A team of onboard experts kept us entertained and informed, giving presentations and workshops throughout the cruise. Jonathan, the ship’s Australian historian, shared a timeline of Antarctic exploration and the formation of the Antarctic Treaty. Kate, a glaciologist from the US, taught us about icebergs and environmental issues. This particular cruise offered a photographic symposium with no less than six professional wildlife and nature photography experts on board, led by Dave and Paul from Canada, with regular workshops and daily competitions and challenges. 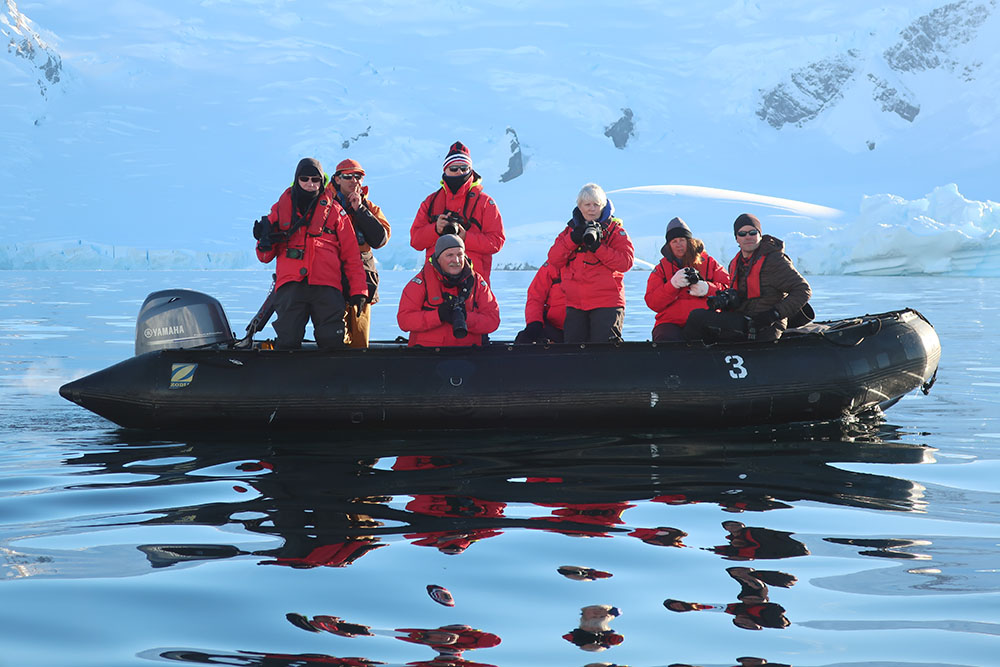 A Zodiac excursion to Fournier Bay on the Antarctic continent ticked the bucket-list for many. Once ashore, guests celebrated with selfies, holding signs declaring this milestone visit to their seventh continent. Without a doubt, the highlight of this cruise was a magical afternoon spent anchored in Charlotte Bay. Conditions were mirror perfect and Boris, our fearless expedition leader, announced an afternoon ‘bladder buster’; he wasn’t joking. We spent three-plus incredible hours chasing and photographing whales and sea birds. Humpback and Minke whales were abundant, putting on a show for our rapid-fire lenses. Every Zodiac was out in the bay, providing a brilliant pop of colourful red jackets to enhance our photography.

Until you have been, you simply cannot appreciate the vastness of this place. Scale. That is the difference between seeing Antarctica in a photo or a David Attenborough documentary and actually visiting. It was the first thing to hit me. The sheer size and volume of the glaciers, the incredible number of icebergs and the insignificance of my presence. 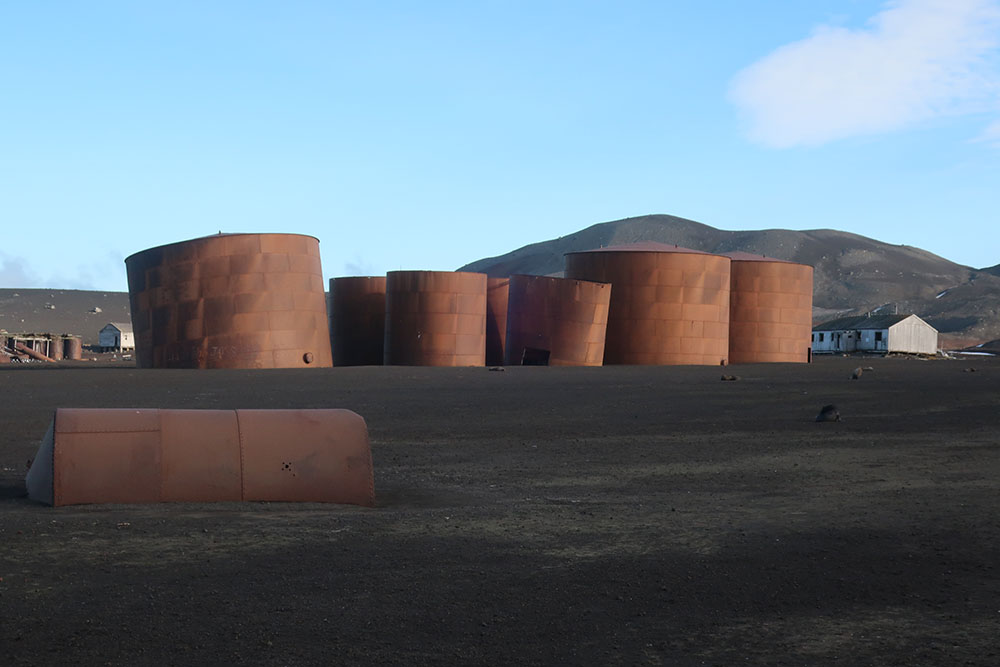 Heading back towards Ushuaia, we anchored in the protected harbour of Deception Island, the site of an abandoned whaling station in the shadow of an active volcano. After a fascinating few hours exploring the ruins of this brutal former industrial site, situated in incredibly hash conditions, many of my fellow passengers participated in the polar plunge, stripping down and running into the freezing water. 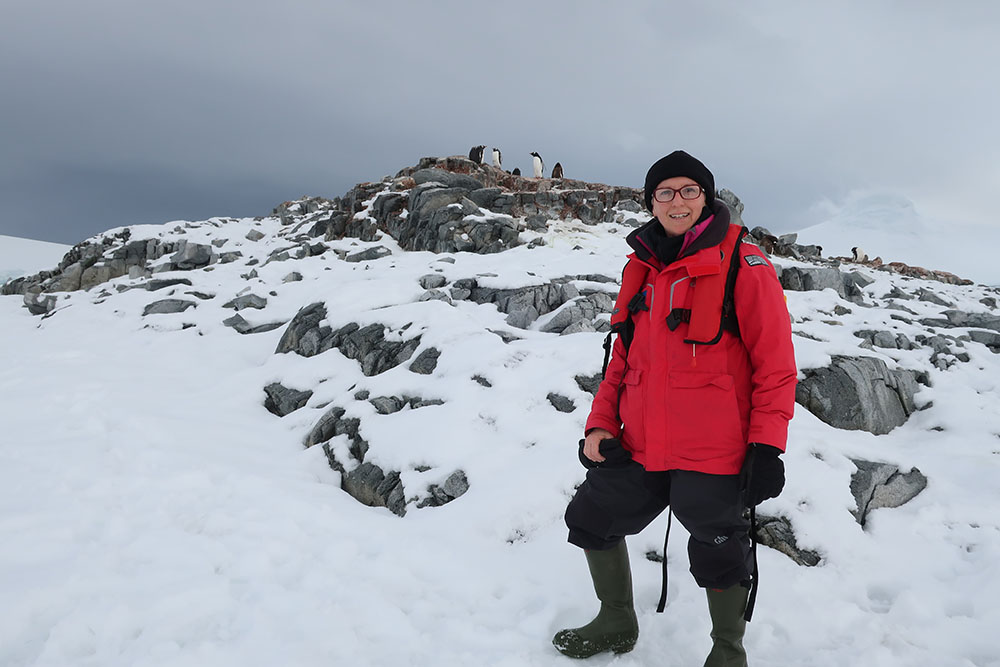 The last stop on our itinerary was Half Moon Island, a rocky outcrop teeming with wildlife. As Franco predicted, we found Kevin. Unfortunately, he looked miserable as he was moulting. Theories abound that Kevin’s sense of adventure got him into his predicament. However, as he has been sighted safely residing with the chinstrap colony for nine consecutive season, all things considered, he is doing just fine. That night Franco and I drank a toast to Kevin, wishing him many more years to come.

My top tips for an Antarctic visit:

Travel warning - Do not get a henna tattoo in Bali

The natural beauty of travel