Guest traveller Lucy Menadue spent her childhood dreaming of a life filled with adventure and watching in awe at the amazing places Getaway would take her. More than 20 years have passed since those days of dreaming and in this short story she takes us on her own adventure of a lifetime to the volcanoes of Guatemala.

This story is one of the formidable Acatenango volcano in Guatemala. Three weeks into our Central American adventure, we left our lovely little eco-lodge, green surroundings and the howler monkeys of Rio Dulce, and headed for the charming city of Antigua – with its colonial architecture, cobblestone streets and relaxed vibe. Normally, the drive takes around 7.5 hours, however with traffic at a standstill in Guatemala City we arrived in Antigua 12 hours later.

Overlooking Antigua are three impressive volcanoes – Agua, Fuego and Acatenango. Both Fuego and Acatenango are active, but only Fuego has regular eruptions. Acatenango has not erupted since 1972 and is renowned for its volcano hikes. While many travelers make the journey further afield to Pacaya Volcano for a nice three-hour hike we decided to take the 12-hour overnight hike up Acatenango. Or I should say, my husband wanted to do it and being stubborn I obviously had to climb it as well. All I can say is that we were warned. We were warned about how difficult it was. We were warned that people had recently died from hypothermia while climbing it. That didn’t stop us.

After failed attempts at an afternoon nap we departed that evening. It wasn’t until our minibus started winding up higher and the temperature dropped, fogging up the windows, that my nerves hit. After meeting our guides at a local house, we started the climb. I immediately regretted my decision – I doubted my ability to make it but knew I would have no other option. A day time hike might not be so bad but I am useless at night. I love my sleep. I need my sleep. And now I had been awake all day and was going to hike uphill all night at high altitude. I was in for some trouble. The walk started off relatively easy. Up along a road and into some paddocks. It didn’t seem too bad…. 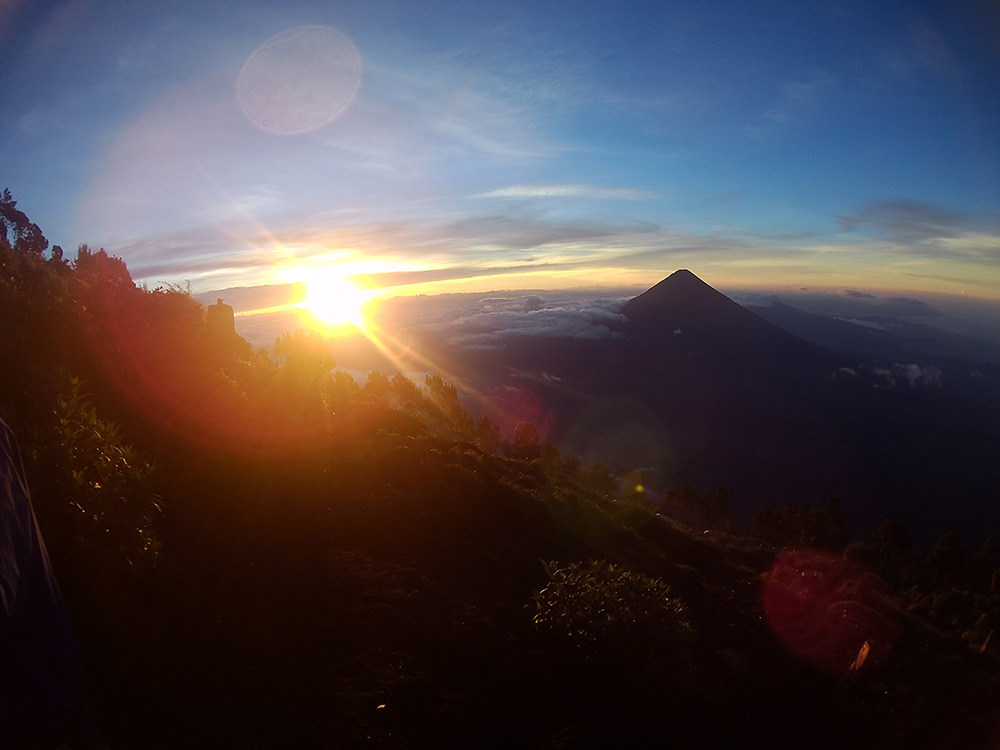 With the summit at 3976 metres above sea level, it wasn’t long before some of our fellow hikers started experiencing symptoms of altitude sickness. Our guides would stop for brief periods to recoup, which would give sick people time to slump down in a heap.A few of us struggled along at the back, slowly and deliriously placing one foot in front of the other. There were stages where we were engulfed in a thick fog that prevented us from being able to see any further ahead. Our group had spread out with the fittest bounding off into the distance and the slowest lagging behind. Amid the fog we would reach forks in the road and have no idea of the direction the others had gone. Luckily, a dog named Toby decided to join us for the trek and helped to guide us. He would appear from nowhere, walk with us for a time, before disappearing again. He seemed to appear when I was struggling the most. He became my spirit animal giving me the strength to continue. 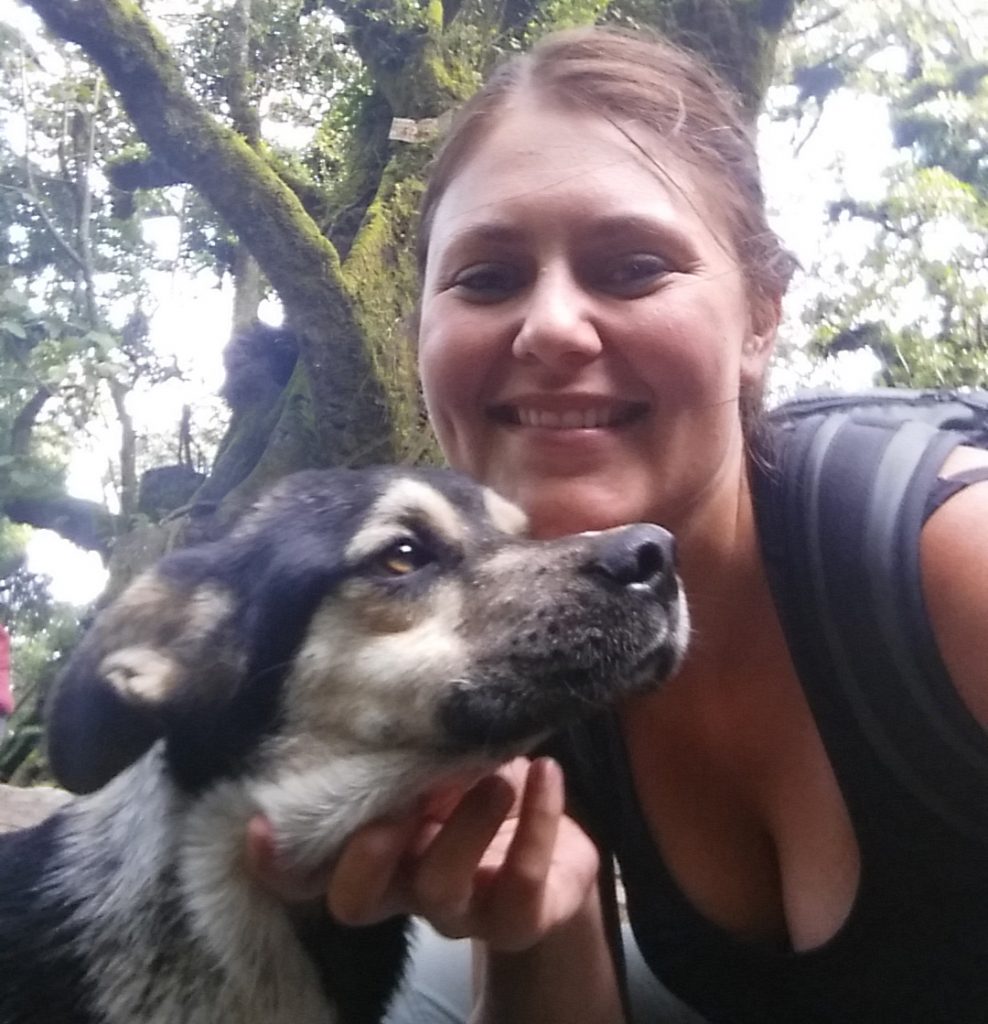 As we got higher, the ground got softer. My legs ached and I was so tired I was sure I was starting to hallucinate. As we hiked through a thick fog, we could hear a loud, but distant roar. The sound became constant, but the fog was so thick that we could barely see our surrounds, let alone where the sound was coming from. At long last, we arrived. The final ascent was long, steep and slippery. We arrived, and yet couldn’t see a thing. In the distance, we could still hear that deep bellowing roar. It was so cold that our group spooned around a campfire to keep warm. And just like that, the fog shifted, the clouds parted, and we were blessed with the most incredible reward. The roar was in fact the sound of Fuego erupting in the distance. We could see lava spewing out the top and rolling down the sides. Far below, we could see the lights of Guatemala City. To top it off, an impressive lightning show played in the background. We could not have hoped for more. I never considered I would be fortunate enough to witness a volcano erupting in my lifetime. As the sun rose, the lava slowly stopped but the sky lit up a stunning array of oranges, pinks, blues and purples. 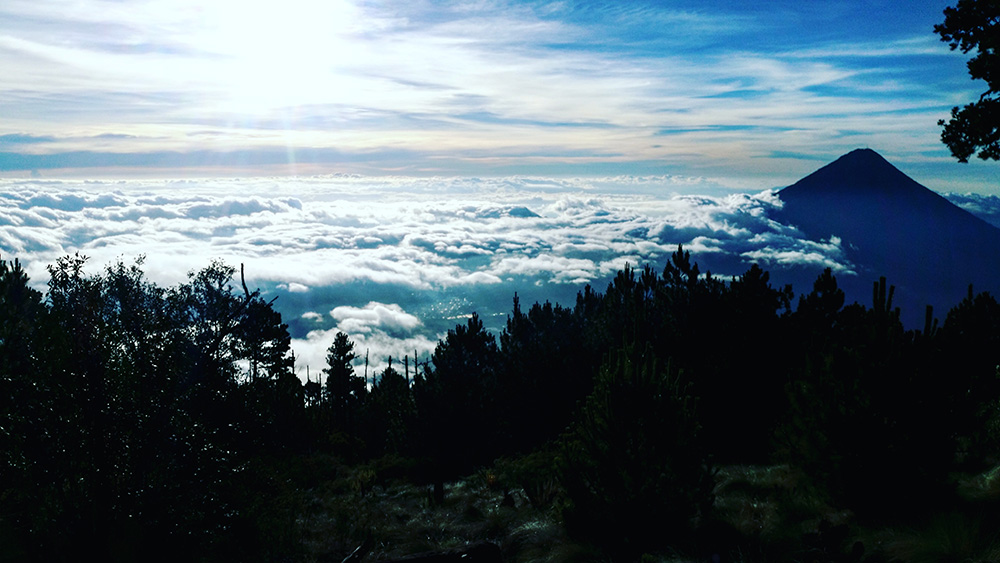 Sadly, the rising of the sun meant we now had to begin the long and difficult descent. While climbing down would not take anywhere near as long as our ascent, we would be doing it with no sleep, no food, and with incredibly weak muscles. One by one our legs gave way and we would slip down the soft volcanic earth. My legs shook with every step. It took three hours to reach our guide’s house and what a feeling of accomplishment it was. Still, to this day, the overnight climb up Acatenango remains the most difficult physical and emotional challenge in my life. But the views will forever remain etched in my mind.

The featured image was taken by photographer Hadi Al Sinan.

Around the world with 8 movies