Guest Traveller Janette Guttmann loves to travel when she gets the chance. She has just completed a 10-night Royal Caribbean cruise from Hong Kong to Singapore, with stops in Taiwan and Vietnam, on Royal Caribbean’s MS Voyager of the Seas. Janette travelled with her friend, Julie, who turned 70 during the cruise and Julie’s cousins from England. Julie had never cruised, nor been to Hong Kong before. Here, Janette shares some advice about cruising, and photos from her ‘shore excursion’ in Taiwan. Janette loves cruising because she finds it relaxing and fun, and found the tour valuable because it taught her a little bit of history of Taiwan. Let’s follow in her footsteps or, should we say, wake… 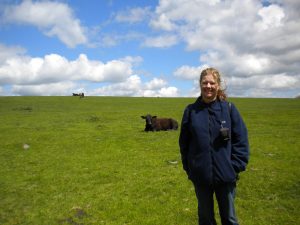 First, some information about the cruise experience on board the Royal Caribbean MS Voyager of the Seas…

What’s included. All food in the main dining areas is included in the price so when you work out the cost over the whole trip, it is quite good value. You pay for alcoholic drinks and brand-name soft drinks, like Coke or Pepsi. As Royal Caribbean Cruise line is American, anything you buy on board is charged in US dollars. No cash is used other than the casino for bets. Your Sea-pass card is your one card for purchasing on board and your security pass when you get off and on the ship.

Restaurant on board the MS Voyager of the Seas. Image: RCC.

Tours. Shore excursions are optional tours that you can pre-purchase before you leave or, once onboard, at Guest Services or via your TV screen in your room. We pre-purchased all of our tours so that we wouldn’t miss out. You do not have to buy any tours if you want to do your own thing while in the ports however, if you are not back on board by the time specified, you may be left behind. If you are on a bought tour, the ship will wait for the tour to return. That happened to me and my family in Egypt.

On board the MS Voyager of the Seas. Image: RCC.

Daily schedule. I find cruising very relaxing. You have a cabin attendant who cleans your room everyday. As we booked in Australia, the tips for the cabin attendant were included in the price. Normally, envelopes are left in the room near the end of the cruise for tips. Everyday you receive a printed guide/newspaper with information on activities for the day, weather forecast, port information on the next port of call, attire for dinner, sunrise and sunset times, and time changes, if necessary. There are lots of activities; some have a small fee. We were trivia buffs so we liked to join in. We won a couple of times and received prizes of hats and drink bottles. There are Specialty restaurants that charge an extra amount and we went to the Italian one on Julie’s birthday. It cost $USD35 each for a three-course meal. As it was a special occasion, we were happy to pay the extra. The food and service was very good and everyone enjoyed their meals. There are also shows most nights: Musicals with singers and dancers or groups, magicians or comedians. I went to a few of the musicals and they were very entertaining. The gym has some fees for special training and the spa has fees for their services though we didn’t use any of those facilities. There are pools inside and outside, lots of different bars, and dancing at night in designated sections for over 18s. The shops are quite good value and all duty free, so they are good for perfume and cosmetics. They have sales every couple of days for different items. If you buy alcohol, they hold it for you until you leave the ship. You are not permitted to drink it on board. 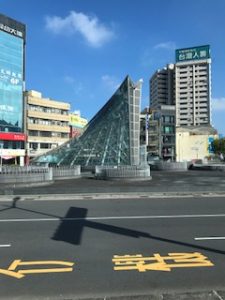 Shore excursion in Taiwan. En route to Singapore, we stopped in at the Port of Kaohsiung in Taiwan. Kaohsiung is Taiwan’s largest port, its second-largest city and centre of the country’s heavy and petrochemical industries. We elected to take a shore excursion and the tour was seven hours long, including travelling time from and back to the ship. Among the highlights of the shore excursion in Taiwan was seeing, at a major intersection in Kaohsiung City, one of the glass structures designed by globally-renowned architect Ieoh Ming Pei. There are four of these glass structures in Taiwan, all designed by I. M. Pei, who also designed the Glass Pyramid at the Louvre, in Paris, France. 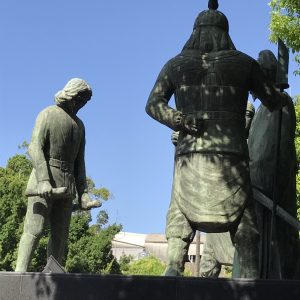 Statues signifying the signing-over of the ownership of Taiwan from the Dutch.

Fort Provintia. Part of the tour involved taking in Fort Provintia, which was built by the Dutch in 1653.  It is located in the city of Tainan which was Taiwan’s capital from 1683-1887. We visited a monument created to mark the signing-over of the ownership of Taiwan from the Dutch. The statues are of Koxinga and Dutch emissary at Chihkan Tower, the site where Fort Provintia once stood. Fort Provintia was a Dutch outpost on Formosa at a site now located in the West Central District of Tainan in Taiwan. It was built in 1653 during the Dutch colonisation of Taiwan. The island of Taiwan, before World War II commonly known as Formosa, was partly under colonial Dutch rule from 1624 to 1662. 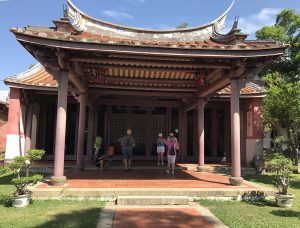 Temples. We also saw the Tainan Confucian Temple, built in 1665. It was a privilege to see such a spiritual place, built so long ago. It is one of the oldest and most historically important buildings in the country. The temple is said to have served as Taiwan’s first official school and since its inception, the temple has undergone more than 30 renovations. It is one of Tainan’s premier tourist attractions.

Main picture: A wall of the Tainan Confucian Temple.

Janette’s Top Five Tips for Getting the Most Out of a Cruise:

A guide to Victoria’s most beautiful flower farms with author, Vanessa Carnevale