​I found myself in such an…unusual environment recently, I just had to share it with you.

Have you ever heard of the saying, “Ducks On The Pond”? Don’t worry, neither had I until i told a Wool Grower recently that i was going to a AWI, wool event, by the same name and i had no idea what it meant. He looked at me in shock, rolled his eyes and informed me “Well, it’s what the shearers would whisper, usually in a disgruntled tone, when a woman entered a shearing shed. It was bad luck to have Sheila’s in the shed”. My how times have changed.

​There I was, near the Victorian and South Australian border, in a beautiful, historic Shearing Shed (hardly, made of magnificent local stone and immaculate in design) full of sweating, puffing bodies (i told you it was unusual) as 30 or so women were shearing, being Rousabout’s and classing the wool. These Ducks were deliriously happy just doing their thing and in this case raising precious money for Cancer Research.

I was so overwhelmed by their energy and the sheer sight of all these women having a ball, to a huge family crowd gathered to watch their skill, raise money and share their fantastic energy… Fun in such a typically male domain, I just had to grab my mic and do some interviews to share their stories. 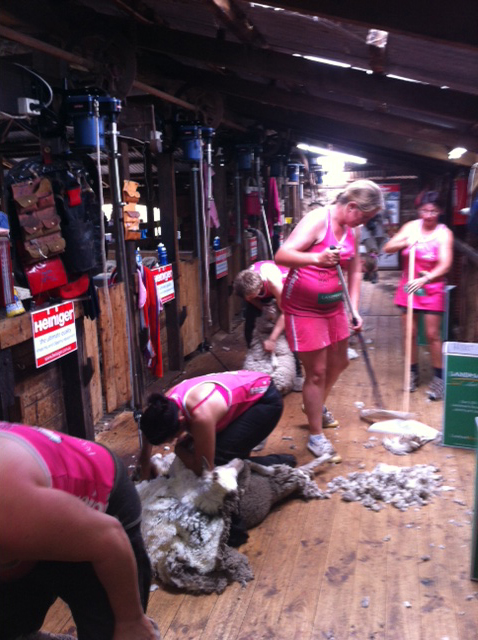 The girls hard at work

​Sam tells me it was her Dad that taught her how to shear, she dearly wanted to follow in his footsteps yet she couldn’t find a job anywhere in WA. “They just wouldn’t accept a female shearer, they thought it was too physically hard on our bodies, it was unheard of”. So they headed off to Tassie in ’97, to her first stand . “My Dad didn’t tell ’em I was female, just said I’m bringing another person over and we can do 300 sheep a day, between us. When they saw me, they didn’t care, just do the job. When I turned up they treated me like everyone else. So it was really good.’ Sam mastered her trade and is now happily ensconced in Vic’s Western Districts where she’s constantly in demand as well as being a Mum 5 kids, yep i said 5. ‘I love having my plate full, I love my kids and at the same time they’ve grown up in shearing sheds. Now, my oldest son wants to be a shearer and my 12 year old daughter can shear half a sheep.It must be in the blood’.

Clearly the family that shears together, stays together.

​I couldn’t find one person, male or female to say whether girls or boys were better at shearing. “Its very much equal!” they all agreed. For that, I admired their honesty. “Shearing is a very personal thing. What makes a great shearer is not numbers but the quality of your work, your style, but also how you treat and respect other people, just like any other office. This is like family here and everyone gets along.”

​Speaking to a Rouseabout, what makes them so good?’ hard working, good timing and A sense of humour’ says Anna. Anna openly admits its the money that drives her, having come over from New Zealand. “Free food, free beer at the end of the week, this is a great house deposit for me. i also love working with men, it’s awesome, it’s a hard working environment, physically and I love the mix.”

​Are women treated equally? “Yep, except the slow ones!” Anna laughs heartily.

​It amazed me how many women responded with “I love the lifestyle”. There seems to be such camaraderie, even when the sheep are angry, they love the job, being in the country, working as a team. 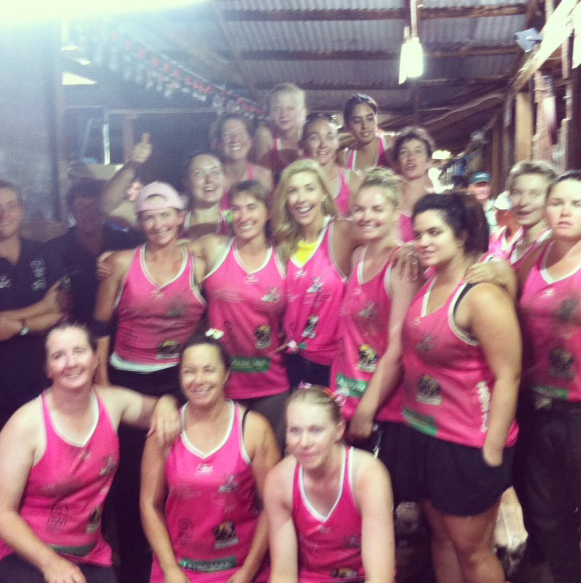 The girls and I

​We have a wonderful shearing team of our property, but I must admit I’ve never had the opportunity to ask such personal questions…unlike today. From walking in and my eyes bulging at the site. To leaving with awe and admiration for these lovely Ducks.

The Art of Publishing