Portugal is a small coastal nation in Europe’s south-west. Its western border is 1793 kilometres of the North Atlantic Ocean and to its north and east shares a border with Spain.

It is a wonderfully diverse little country with lush green valleys and high mountains ranges, balmy beaches and olive groves and cork plantations all adding to its beauty. It has its share of cultural gems with UNESCO World Heritage sites at Évora, Porto, Guimarães, Batalha and Alcobaça.

120 kilometres north of Portugal’s capital Lisbon is Fátima, a small town extremely important in the Catholic world as a place of pilgrimage. Importance was bestowed upon it on May 13, 1917 when three children tending their flock saw a vision of the Virgin Mary.

Lucia dos Santos and her two cousins, Francisco and Jacinta Marto, claimed to have seen the vision of a woman standing on a cloud in a holm-oak tree near the Cove de Iria. In a conversation heard only by Lucia and Jacinta, the woman asked the children to return to the site on the thirteenth of each month until October. 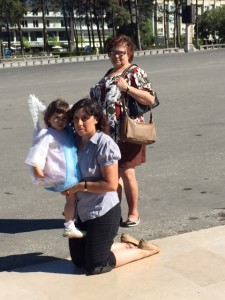 Local resistance and an effort to refute the testimony of the children had no impact. By October, fifty thousand pilgrims had assembled with the children at the Cova de Iria (Cove of Irene). Many claimed to have witnessed a miracle of the sun, but the woman was visible only to the children. She identified herself as “Our Lady of the Rosary” and asked the children to recite the rosary daily, proclaim the need for moral conversion and erect a chapel in her honour.

Three prophecies were revealed to Lucia – the outset of WWII, the rise and fall of communist Russia and a third secret Lucia kept in a sealed envelope until 1944.

In 1930, the bishop of Leiria proclaimed the legitimacy of the two revealed apparitions and authorised the cult of Our Lady of Fátima. Jacinta provided two important accounts of the apparitions in 1935-37 and 1941-42 and from that stemmed the practice of penance, the recitation of the rosary and devotion to the Immaculate Heart of Mary.

According to a statement by Pope John Paul II, the third was a prediction of the failed attempt on his life in 1981. As a result he inserted the bullet fragment that almost killed him into the jewelled crown of Fatima. That can be seen in the underground museum of artefacts.

Each year on May 13 and October 13, pilgrims overrun the town, causing the roads leading to Fátima to be choked with pilgrims in donkey carts, on bicycles or in cars. Some walk and some go on their knees in penance. The pilgrimage begins two or three days before the 13th causing the barren desolation of the countryside to turn into a fervent and moving drama.

The Basilica has an apron twice the size of St Peter’s square in Rome, and every bit of it is needed to accommodate the pilgrims. Midnight mass sees it filled with thousands of twinkling candles and a silence broken only at chosen moments by chanting. Francisco and Jacinta are entombed there, and Lucia, who became a nun, died in her convent in February, 2005. A new cathedral has been commissioned to honour her. 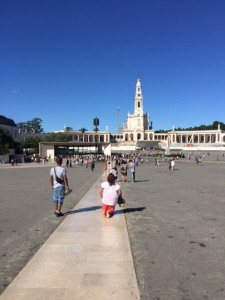 How Australia and the rest of the world celebrate Easter