Oui, Paris is the world’s most romantic city but even proud Parisians take a whole month off in summer to escape their beautiful city. Where do they go? They take the TGV, a fast train, just a couple of hours out of the capital to some amazing places brimming with things to do and see. Join Catriona as she does what any chic Parisian would do: Travel beyond Paris and journey to the closest coast (Normandy), or head to the capital of the Auvergne-Rhône-Alpes region, the city of Lyon…

Normandy is the agricultural heart of the ‘big farm’ we know as France. This region, northwest of Paris, is a place full of history, with a beautiful coastline featuring long, sandy beaches. It has a wonderfully genuine and authentic flavour and it has not been over-commercialised. There are local markets on every day, in every village, selling local produce. As well as being very green and picturesque, it is also an extraordinary centre for history and culture, with wonderful chateaus and gardens to visit, amazing restaurants, and brilliant shopping. There’s something for everyone. On my recent trip, I based myself on the historic, breathtakingly beautiful River Seine at the height of summer and it was visually extraordinary. It’s easy to see how the region has inspired some of the world’s most magnificent artists, such as Monet, who started painting en plein air here. It’s close, too: Just two-hours from the capital makes it a very attractive destination for Parisians, as well as international tourists.

My top five highlights of Normandy:

Honfleur is really like taking a step back 200 years in time. It was, fortunately, not destroyed in the second world war and not much has changed since then in this little coastal village where Monet first learnt to paint outside. There is a beautiful harbour and wonderful shopping. It is a very tiny place where you can see the English Channel opening up. Half of Paris comes out here in the Summer. 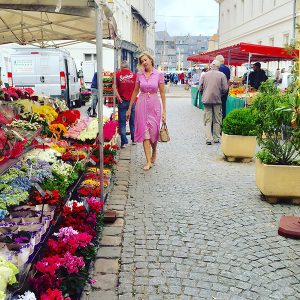 Honfleur, in the middle of the Saturday markets.

Deauville is where a good proportion of the other half of Paris comes for their summer holidays. It is posher than Honfleur, being where the rich and famous like to play, which is perhaps why it is considered the 21st arrondissement of Paris! It is said that this town was conceived for fashionable pleasures and that continues to this very day with the prevalence of horseracing, polo, golf, art galleries and upmarket shopping. On the magnificent, wide, sandy beach, there are lots of colourful beach parasols, with each resort having its own parasol colour. Coco Chanel opened her first shop here in 1913 as a young dressmaker. For her, it was a very good opportunity to be amongst the population of very rich and elegant people, keen to show their social status via the clothes on their backs. Coco Chanel turned the blue-striped shirts of the local sailors into a fashion item. Deauville oozes style and is tres chic! 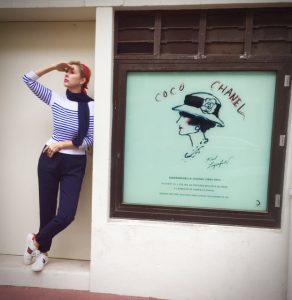 Giverny is where Monet has his house and garden, and painted his waterlilies. Go to Monet’s Garden first thing in the morning before the crowds. You can see first hand the same landscapes that Monet painted. If you get there early you may even be able to chat with the gardeners.

Rouen is the capital of Normandy. Every night in summer, the town hosts the ‘Cathedral of Light’. This free sound and light show is along the lines of Vivid in Sydney, but the images are projected onto the Cathedrale Notre-Dame de Rouen dating back to 1023! Joan of Arc visited this cathedral and Richard the Lion Heart’s heart is said to be in this cathedral. Thirty-minute shows start at 11.30pm and repeat every half hour. The two shows explore the story of William the Conqueror and Joan of Arc. It is quite amazing and it runs from early June through to late September. At night in Rouen, everybody is walking around having a good time.

La Caronne is the oldest restaurant in France, opening in 1345! Soak up an authentic atmosphere in a wonderful Rouenese institution. This is where people sat outside in 1431 and ate lunch while watching poor Joan of Arc burn at the stake. When you visit, it feels bizarre to be in amongst this living history. It is something we cannot compete with in Australia.

I recently travelled by train from Normandy in the north, south-east to the gastronomical capital of France and beloved home town of one of the world’s greatest-ever chefs, Paul Bocuse. Of course, I write of the city of Lyon, the culinary heart of France, sitting at the junction of the Rhône and Seine Rivers, surrounded by vineyards and mountains. The city of Lyon boasts 2000 years of history and is currently experiencing a tourism boom, being listed among the Top 10 most popular tourist cities on Google. More and more Australians are visiting Lyon each year and a lot of international travellers are now bypassing Paris and heading straight to Lyon, looking for an authentic, French destination in a down-to-earth city with friendly locals. Because the city is not crowded with tourists, it is possible to meet some of Lyon’s 480,000 people, making it about the same size, by population, as Manchester, England. Lyon is France’s third-largest city, after Paris and Marseille, and it is rich in history. There is a special atmosphere in Lyon. It is one of the most beautiful cities in France. Lyon is buzzing.

My top five highlights of Lyon:

Heritage. Founded by the Romans 2000 years ago, the city centre has been developed without destroying ancient buildings.  It is listed by UNESCO as a World Heritage Site, specifically, the Roman district and Fourvière, the Renaissance district (Vieux Lyon), the silk district (slopes of Croix-Rousse), and the Presqu’île, which features architecture from the 12th Century to modern times. Lyon is also the French capital of “trompe l’œil” walls, a very ancient tradition. Many can be seen around the city in which you can easily walk everywhere to enjoy the sights.

Silk. One souvenir you must take home is a silk scarf. Lyon famously sits at the end of the Silk Road, which started in China. Thanks to the silk trade, the city became an important industrial town during the 19th Century. The city still boasts the most beautiful silk factories including Hermes, famous for its luxurious silk scarves. You can receive a demonstration of the traditional ways of making silk scarves, dating back to Renaissance times, in the workshop of St Georges in the old town. 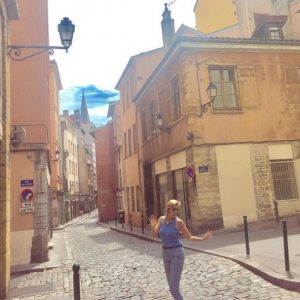 Gastronomy. Eating very well is part of the culture in France and the act of preparing and consuming food in Lyon is like a ceremony. People here respect and embrace the ceremonial experience. They also adhere to the tradition of all that goes with a typical French meal. Whether you’re with family, friends, or colleagues, you take time and have lunch in Lyon. Paul Bocuse is based here and you can visit his institute called Art de Vivre, and sign up to learn the secrets of French cuisine, pastry and sommellerie, even if you’re just passing through. I’m told Paul Bocuse also holds his own luxury market every day except Monday at which he sells fish, cheeses, macaron, brioche, and lots of other goodies. Locals go on Saturdays and Sundays and enjoy a glass of wine and oysters.

Roses. Lyon has a wonderful history of roses. For the past 150 years, the city has been cultivating the art of the rose by creating new, prestigious varieties. More than 3000 varieties of rose have originated here. Situated in the Tete d’Or Park and inaugurated on 19 June 1964, the International Rosepark covers five hectares, contains 5,000,000 roses, and is floodlit every evening.

Cinema. The city has played a significant role in the history of cinema. The Lumiere brothers invented the cinematographe in Lyon, pioneering cinema in 1895. The Institut Lumière holds many of their first inventions and other early cinematic and photographic artefacts. The city is also known for its famous light festival, Fête des Lumières, which occurs on 8 December and lasts for four days, earning Lyon the title of ‘Capital of Lights’. The festival is a celebration of thanks to the Virgin Mary, who purportedly saved the city from a deadly plague in the Middle Ages.

My top five tips for travelling in France: