Guest traveller Katie Boyd escaped the Melbourne winter with an extended weekend in Hong Kong staying with the Journeys to Come team at Hotel Indigo on Hong Kong Island. The holiday was an opportunity to relax and explore, and to swap beanies and scarves for dresses and sandals. 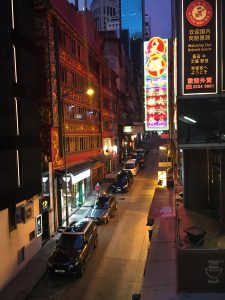 Travelling up the world’s longest escalator into the hills on Hong Kong.

Everyone has an idea of what a city will be like before they visit, especially somewhere as well-known as Hong Kong. Nothing could prepare me for just how remarkable its cityscapes are. I found myself regularly stopping to marvel at the panoramas of towering skyscrapers jutting up against lush green hills. In fact, for one of the most densely populated places on earth there is an amazing amount of green space in Hong Kong. Scores of public parks are scattered throughout the city, offering convenient places to get away from the hubbub of the crowds. While taking a time-out in the very pleasant Kowloon park, I stumbled across the Heritage Discovery Centre. The museum is a great place to get a sense of how Hong Kong’s architecture has fused with the unique natural landscape throughout its history, and how the influx of migrants in the 20th Century drove the city’s impressive vertical growth and massive land reclamation projects.

Of course, the best way to get a sense of the sheer scope and breadth of this amazing city is to head on up. One of the most popular ways to do this is to hop on the clanking cable car up the steep hill to Victoria Peak. Avoid the crowds and head up at night. Wait for the mist to roll past and behold the majestic night views of the city and harbour below. You can also stroll along the forested walk around the peak that affords almost 360 degree views. In the hotter months, it’s not hard to see why the British colonials took up residence in the area for the better part of 150 years. 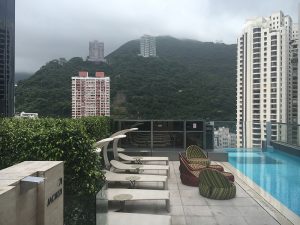 Our view from the Hotel Indigo pool showing the mountains where Victoria Peak is located.

British history is stamped all over Hong Kong Island and Kowloon Peninsula. Most residents speak English and signage is bilingual, making it a breeze to find your way around (or at least ask for directions). Above all else though, it’s Hong Kong’s past and present as a commercial hub that drives the character and pace of the city. Ships constantly roll into the harbour bringing all manner of trading goods, driving the massive economy of the area. One of this trip’s other highlights was attending the Dragon Boat Carnival. (Come back and read the story about the annual Dragon Boat Carnival on Monday 12 June.)

Most of what I knew about Hong Kong before visiting was that there was a lot of shopping to be had. It turns out this is an understatement. Shopping is impossible to escape in Hong Kong. From the 18-storey malls packed together in Causeway Bay, to the luxury stores lining the streets of Central and Tsim Sha Tsui areas, shopping here is like electroshock retail therapy. It’s probably worth noting that Hong Kong is decidedly more upscale than it once was, owing to the Chinese economic boom so, if it’s a bargain knock-off or kitsch souvenir you’re looking for, you may want to head off the beaten track and explore some of the narrow, bustling side streets. 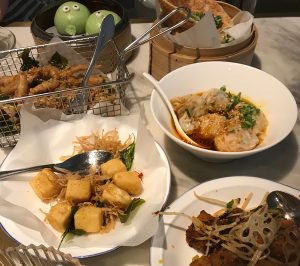 After a full day of shopping, we stopped for Yum Cha in TST.

All that shopping will, of course, work up quite the appetite so, fortunately, there is no shortage of eating choices in Hong Kong. The huge ex-pat population means it’s easy enough to get a Western-style meal but, as they say, when in Rome…. The first place to start is with Yum Cha. There is something so fun in being able to select whatever you like from passing trolleys, whether it’s little plates of spring rolls or delectable steamed dumplings. As a Vegetarian who eats a bit of fish, this wasn’t too risky a venture, but be warned that many dishes are not labelled as containing meat. My advice would be to dine with a meat eater who can test the waters, so to speak, before you dive in.

Katie’s Five Top Tips for getting around Hong Kong:

Travelling Back In Time - Address Book