On a steamy Hong Kong day last month, Journeys To Come team members attended – with thousands of other locals and visitors – the annual Dragon Boat Carnival.

Colourful teams boarded the long and narrow dragon boats and paddled out to the start line to await the boom of the cannon signalling the beginning of this long-standing tradition.

With 20-22 people per boat, the competitors were packed like sardines. The teams were made up of an even split of men and women and a drummer perched up the end beating out the rhythm to row to. 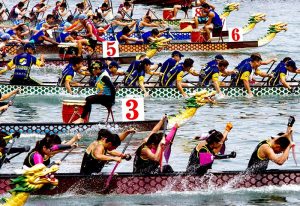 Whether you were by the harbour with friends or enjoying the day with a young family there was something for everyone including food trucks, bands, k-pop and various other amusements.

Hong Kong is recognised as the birthplace of modern, competitive, dragon boat racing.

The first international race was held in 1976 in Shaukeiwan with nine fishermen dragon boat crews competing against a visiting crew from Nagasaki, Japan.

Since then, dragon boat racing has long been a popular paddlesport around the world.

The rapid growth of the sport led to the establishment of an international federation to govern the sport and promote its development worldwide.

On 24 June 1991, the International Dragon Boat Federation (IDBF) was formed with its headquarters set up in Hong Kong and with the support of the then Hong Kong Tourist Association to provide the Secretariat services.

Over the years, the annual Hong Kong International Dragon Boat Races (IDBR) has become an important event on the sporting calendar. Besides a sports event, IDBR is successful in attracting hundreds of thousands of the general public and overseas visitors to appreciate the exciting sports and the authentic culture behind dragon boat races.

Interestingly, a large contingent of foreigners make up the teams and on the day we attended the focus was on international teams.

After spending the day at the races we finished by cooling down with some shopping at the international financial centre and then, to mix it up, some Balinese food in Hong Kong at Potato Head.

Journeys to Come stayed as guests of Hotel Indigo Hong Kong, a hotel inspired by its neighbourhood featuring the iconic Blue House and authentic local food.