My favourite travel destination has to be Santorini (or Mendocino or Paris… no, it’s Santorini. Definitely). It’s not just the feel, or the romance, or the sunsets, or the white buildings and perfect blue sky, or the stray dogs (that walked with me all the way to dinner and then waited, and walked back with me to the hotel), or the writing I was inspired to do, it’s the people.

Everywhere I travel, the people have been wonderful. Everywhere. In Santorini it was next level. I have never felt so at home on my travels. 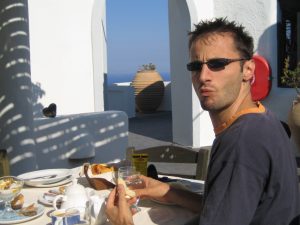 Top tip for holidaying in Santorini

Embrace the bus ride up the side of the mountain. Sure, the road is barely wider than the bus. Sure, the right-angle turns make it feel as though you’re about to tumble into the Mediterranean. But if you’re going to die, isn’t it better to go after seeing an amazing view? Imagine if you missed it! 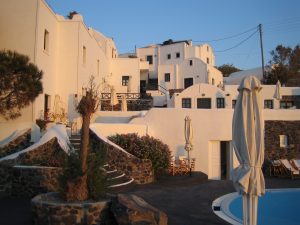 Something he always packs when he travels 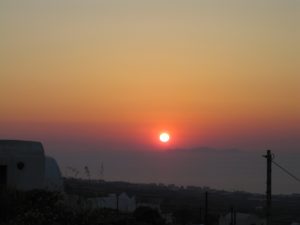 Japan or China. I am fascinated by Asia. The past, the present, the philosophies, the hotted-up cars of Tokyo. I have read every book I can get my hands on. It’s time for me to experience it first-hand. It’s time to go. 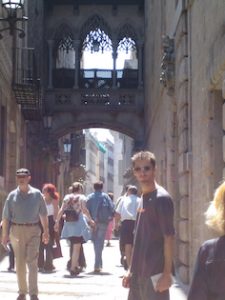 A travel disaster – or near-miss – which stays in his mind

We needed a hotel for our last couple of nights in Barcelona. The rest of our trip had been meticulously planned. We had two spontaneous nights ahead of us. Perusing a guide, a hotel jumped out at us.

To the other side.

I focused, as I tend to do, on finding the hotel, not really taking in the scene. That was for after. So, as I turned down a side street, I didn’t notice, pretty much outside the hotel, the prostitutes picking up clients and the drug deals going down.

We didn’t stay there.

So I either dodged a disaster or a massive party.

I will never know… 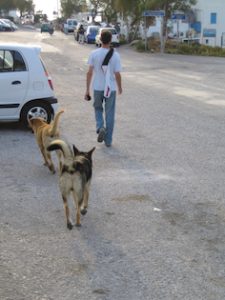 Adam Wallace is a “New York Times” bestselling author, who has also had one of his books be a question on “Jeopardy”, and has also had one of his books read at the White House! Adam enjoys writing more than anything, but he likes drawing too, and doesn’t mind long walks on the beach at sunset. Adam’s previous books include “How to Catch a Leprechaun” and “How to Catch an Elf” (both “New York Times” bestsellers), “How to Catch the Easter Bunny” (read at the 2017 White House Easter Egg Roll), “The Vanilla Slice Kid” and “SPARK”.

Catriona's travel tips from working as a Getaway host