Guest Traveller Samantha Cross is head over heels in love with Istria. It’s in her blood, you see. Her parents were born there and she still has family in this little-known part of Croatia. As she prepares for the launch of her Istrian cookbook paying homage to her roots – particularly her dearly departed grandmother, Samantha has sorted through hundreds of photographs and a lifetime of memories to bring us her top-five destinations for the first-time visitor…

Have you ever wondered what Tuscany was like before all the tourists and industry?! Welcome to Istria, home of medieval hilltop towns, ancient Roman ruins, glittering azure beaches and cobblestone filled villages. The Croatian province of Istria is a relatively undiscovered destination for travellers outside of Europe. A triangular shaped peninsula in the northwest of Croatia, Istria was once part of the Socialist Federal Republic of Yugoslavia and before that Italy. The Romans, the Venetians, the Byzantines and the Italians have all occupied the fertile land, each shaping the landscape, architecture, food and culture into a unique and magical destination.  As you can tell, I am very enthusiastic about this place! And in case you didn’t pick it up in the introduction, I must let you know that I am just a little biased: my parents are from Istria.

There are so many things to see and do (and eat!) in Istria so, with a lot of editing and effort, I have attempted to pick my top-five destinations for the first-time visitor… 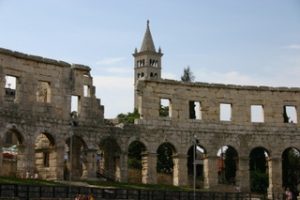 Pula is a must-see and is home to one of the six largest remaining Roman Amphitheatres in the world. Affectionately known as the Arena, it is largely intact and is now used for spectacular open air concerts. Built in 1AD from local limestone, the Arena has an interesting underground museum and is a photographer’s dream. Walk down from the Arena along Istarska Street to discover more Roman relics, including the Temple of Augustus (Augustov hram) and Sergius’s Arch, locally known as the Zlatna Vrata, or Golden Door. 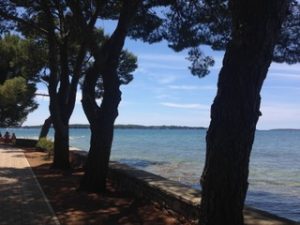 Fažana, with Brijuni Islands in the distance.

Fažana is a fishing village turned tourist destination. An evening walk along the promenade and a pizza and gelato here, are a must. Fažana is also the gateway to the Brijuni Islands. The Brijuni Archipelago is made up of 14 islands, some of which were settled by Romans. There is a hotel on Greater Brijuni (Veli Brijuni) but most visitors arrive on day excursions. Rich in interesting history, a fun tour on a little train ensues and there’s lots to see, do and learn. 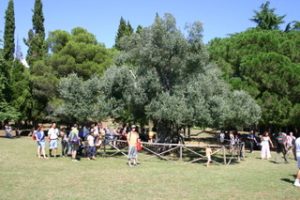 One of the oldest olive trees in the Mediterranean/Adriatic still bears fruit at around 1600 years old, phew! Just one of the many fascinating attractions on the island! 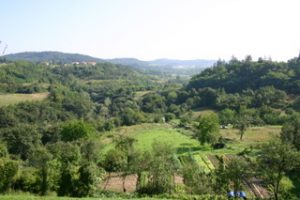 Some call Rovinj the most photogenic town in Istria. Still a bustling port (you can take a day trip to Venice from here and indeed the town has a Venetian vibe), it is typical of a cathedral port town found along the Croatian coast. Narrow cobblestone streets filled with boutiques and eateries lead up to the pretty cathedral. By day, swim in the crystal blue waters and have a cocktail by the bar. By night, there is a plethora of restaurants to choose from and maybe, well, have another cocktail by the bar, this time by candlelight! 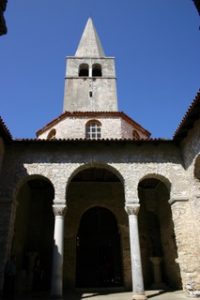 Poreč retains the classic Roman layout with two main roads crossing each other and the monuments of the town lining these roads. The absolute highlight is The Euphrasian Basilica which was built in the 6th Century and is a Byzantine masterpiece, on the UNESCO World Heritage List. The Romanesque House dating from the mid-13th Century is worth a visit, too. 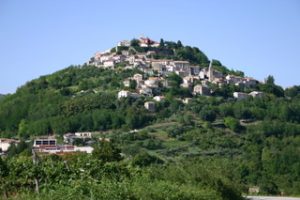 Driving through central Istria is stunning. Unlike Tuscany or Umbria, the hilltop towns don’t have a lot of industry surrounding them, remaining largely untouched since the Middle Ages. Motovun’s fortifications still remain and the view from the top is glorious. This is truffle country, so be sure to stop for lunch or dinner. 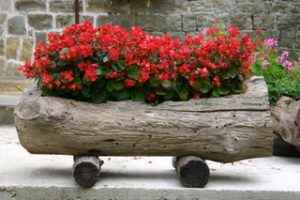 It would be remiss of me not to mention my favourite hilltop village, Grožnjan. It’s called the artist’s town, with an abundance of galleries and artist’s studios. Narrow lanes open into picturesque squares, with flowers spilling from every stone window sill and doorway. Each hidden nook and cranny of this special town has an artistic touch and is delightful. 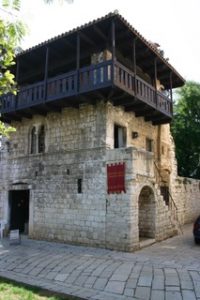 Samantha’s Top Five Tips For Getting The Most Out of Istria:

Editor at large on the Dalmatian Coast

Why we do what we do