For Guest Traveller Reggie Johnston, when the seed of an idea to travel to Kashmir, India, was first sown in 1975, the concept of a bucket list was unknown. Thanks to an inspirational teacher who, for reasons he still can’t quite fathom, decided to show grade-four students a documentary about floating markets and colonial houseboats on Dal Lake in Srinagar, the idea fell on fertile soil. Let’s accompany Reggie as he traces the epic trip from its genesis, to the highest-motorable roads in the world and the point of uncomfortable altitude sickness, and down again… 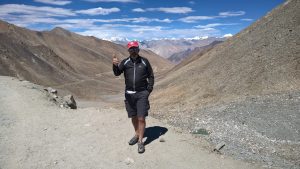 Kashmir had been top of my list but ended up the last place I would get to when I decided that 2016 was the year to visit. A friend and I cycled from London to Rome in 2005 so I began thinking about combining the visit with my cycling passion. 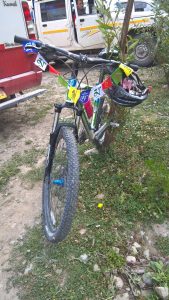 The bike I hired from the tour company, with optional prayer flag for luck.

I researched what was possible and was enthused by the incredibly detailed cycling guide to the region written by Laura Stone: “Himalaya by Bike”. She not only catalogued her adventures over five years of exploring this region and beyond, she includes her own hand-drawn maps of what is available to travellers during the short season that the high roads are open, where to eat, stay and get cash, and where to avoid.

After more research, I realised it may be easier and actually sensible to go with a specialist tour company. I booked a 17-day ride from Manali to Leh, (with Redpsoke Tours) which followed the Manali-Leh Highway. This was built and maintained by the Border Road Organisation (BRO) which clearly has a sense of humour and is also responsible for the pithily-labelled road signs throughout the region. This highway lays claims to having the three highest-motorable roads in the world (peaking at the 5602-metre Khardung-la above Leh) and this kind of challenge is always immediately appealing to any cyclist. 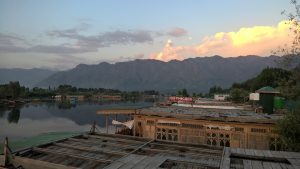 It was at that point I realised that my goal of seeing Dal Lake was several hundred kilometres and a few mountain ranges a way from both Manali and Leh. I looked at travelling by bus at the end of the ride from Leh to Srinagar, but reading Laura’s comments and thinking about time constraints, I decided to reverse this idea and travel to Srinagar first.

Having decided on that, I flew to New Delhi from London and stayed overnight before continuing to Srinagar. I left the bulk of my gear at New Delhi Airport and took enough for the few days in Srinagar. I had a sleeping bag and cycling gear for the second part of my adventure. I decided not to take my own bike for this trip and instead hired one from the tour company. It just made life less complicated and more flexible.

And the time of going (August 2016), Srinagar was on the UK FCO government’s list of slightly dangerous places. All but essential travel was recommended. So, to visit you may find that your travel insurance may void should you choose to visit the region. This is because, sadly, since the partition of India, Kashmir – particularly Srinagar – has been fought over by both the Indian and Pakistani governments. The situation when I visited saw the city under curfew and the local population prohibited from opening many of their shops and businesses. This prompted several phone calls before I left London from my host on Lalarukh Houseboats asking me if I really was coming and aware of the political situation. The answer to both was an unequivocal “Yes” as while I was aware of the situation in Srinagar, having waited over 40 years to finally visit, I decided to be guided by my gut feeling that ‘fortune favours the brave’. I was glad I did. 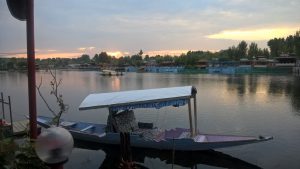 A shakira on Dal Lake.

Part 1: Houseboating on Dal Lake. Arriving at the airport, I was met by the houseboat representative and taken to Gate 9 on the lake, where I was transferred by a waiting shakira for the short paddle to the houseboat. On boarding, I was met with the smell of the cedar wood from which the houseboats are beautifully made. The rooms resembled both a Victorian drawing room and a traditional Kashmiri home, lined with hand-carved cedar panelling. It is truly like stepping back in time but with a few mod cons like hot running water and Wi-Fi. The views across the lake took in the surrounding western edge of the great Himalaya were truly breathing taking, although at ‘only’ 1585 metres, the region wasn’t as breath-taking as what was to come. I achieved my ambition of spending time on the luxurious houseboats and taking trips by shakira across the lake. 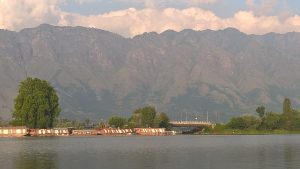 Another view of Dal Lake.

Part 2: Trekking. Due to the curfew, little was open in the way of shops and I was offered the chance to go trekking up to 4,000 metres with local shepherds from Kangan, about 40 kilometres north-east of the lake. I accepted the offer and, after a 2.30am start, was taken by car to Kangan for the trek at 9am, after a breakfast prepared by my guide’s wife and family. This was an unexpected bonus and arriving at another shepherd’s home some 2,500 metres above Srinagar, it was a surprise to find the children enjoying a serious game of cricket while lunch was prepared in a stone hut carved into the side of the mountain. This was their home all year round, even in the depth of winter, without either running water nor electricity. It was clear too that the politics of the valley were of little interest to the shepherds and their Kashmir goats. It was like stepping back in time and provided time to reflect on my own list of priorities. 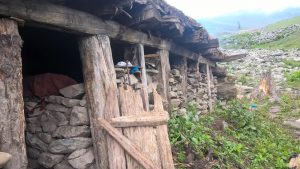 A shepherd’s home – a stone hut, without running water nor electricity, carved into the side of the mountain.

Part 3: Cycle Tour. I returned from there to New Delhi where I met up with the other five people on my cycle tour. There were three Dutchmen, all very experienced cyclists, in the group, and an Aussie girl from the Australian Embassy in DELHI who, by her own admission, was a novice at this type of trip however, she made it through the whole ride without any problems. There may not be mountains in Holland, but the wind there is referred to as ‘The Dutch Hills’ as it’s just as difficult to ride into as a mountain is to ride up. The Dutchmen had been everywhere: The Rockies, the Andes, Mongolia, Northern Pakistan and the western edge of the Himalaya into Tajikistan, and of course all the big European rides through the Alps and the Jura. The Dutch guys who had done this sort of trip a few times all agreed it was the best-organised and -catered trip they’d done. The cost of the ride was around £1300, plus airfares to and from Delhi and the flight back from Leh to Delhi – or wherever you choose to fly out to.

We travelled by mini bus with our gear to spend a night in Mandi. The trip was surreal, leaving the plains and heat (38-degrees Celsius) of Chandigarh before entering the damp foothills of the Himalaya at Mandi. An overnight stop there before our final destination and starting point in Manali (2050 metres) and home of the world’s best momos – a steamed dumpling. We spent two interesting days there looking at the rain and acclimatising to the altitude. 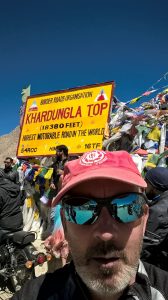 The next 15 days were spent camping overnight in tents, with the support team making everything ready for our arrival in the later afternoon each day. For our trip, there were more staff than riders. They would heat a bucket of water for each of us for a warm shower and to wash our kit, and prepare a mainly-vegetarian dinner for us. After leaving Manali, we slept at varying altitudes of between 2500 metres and 3600 metres, at which it can be cold and difficult to sleep, but not impossible.

I must admit that when I looked at the brochure, I wasn’t sure how exciting the landscape would be. Having lived in the verdant UK for the past 27 years it can be a shock to see such barren landscapes and at that altitude there is no vegetation. The mountains, vastness and people however more than compensated and the area was literally, breath-takingly beautiful in its uniqueness. And while speaking of breath-taking, I lost two night’s sleep (non-consecutive, fortunately) due to the altitude. Sleeping at around 3600 metres, the air is quite thin and as, nearing sleep, my respiration decreased, my body would gasp itself awake which was rather frustrating, but just part of the fare to be there.

The cycling was challenging, the roads aren’t as steep as, say, the French Alps in the Tour de France as they’re designed for big military vehicles so they’re less of a gradient; not more than about 8 per cent. The descents can be a bit hair-raising, depending on how fast you want to take them, and there are streams to cross which just force their way across the roads. As with mountain roads anywhere, there is a constant battle between man and nature to keep the roads actually in existence, and hence like the Alps, or the Andes, you may find your road blocked or has vanished when you get there! Timings are an inexact science. If you’re worried about repairing your own punctures, etc., we had a support team that stayed with us in a vehicle, and two support riders: One at the front as a guide, one at the rear looking after whoever was last. 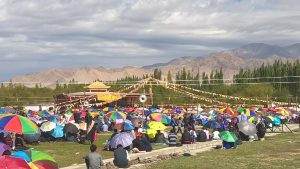 His Holiness the Dalai Lama lecturing to a huge crowd in Leh.

The trip was topped off by the chance to see His Holiness the Dalai Lama, the head of state and spiritual leader of the Tibetan people, lecturing to a huge crowd in Leh, close to his native home in nearby Tibet. Oh, and the opportunity to pick up some amazing gifts, such as genuine pashminas, direct from the source.

Reggie’s Top Five Tips For Getting The Most Out of Kashmir:
India, Kashmir

Egypt has my heart

Exploring the flavours and fashion of India

A life a little less ordinary, by Katrina & Nick Haigh, from Grown Up Gap Year Experiences