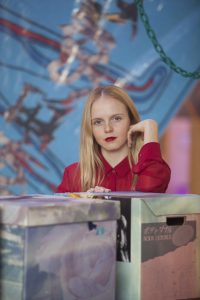 The reason for my love of LA – My daughter, Olivia, at her gallery!

It would be fair to say that I had a preconceived prejudice against the city, after all wasn’t it all a façade with no real substance or soul, a maze of freeways with people imprisoned in their cars for hours, sleazy Hollywood producers preying on young wannabe actresses with dreams in their heads and aprons over their shoulders?

I’d been to Los Angeles many times, but usually for a few hours, rarely more than a few days. It was a necessary stop off, not a destination.

I was wrong. It turns out LA is brimming with substance, take for example the number of galleries and museums: The Getty Center, The Broad, The Hammer Museum, and LACMA, to name but a few. 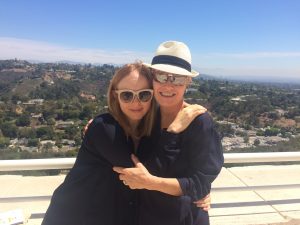 Jane Brook at the Getty Museum with Olivia.

And while these established behemoths serve as wonderful reminders of a rich and diverse history, there is as much excitement in the burgeoning contemporary art scene that has been built by a new generation of artists, writers and collectors looking to create something in their own mould. 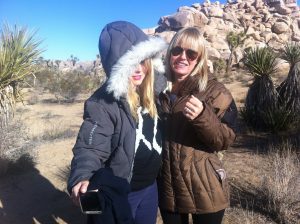 Jane Brook and Olivia, at Joshua Tree National Park just outside of LA.

But it’s far more than art. It was in Los Angeles that I discovered the tradition of watching NBA basketball on Christmas Day at the famed Staples Center and hiking the canyons that watch over the sprawling metropolis like caring parents over their growing children. 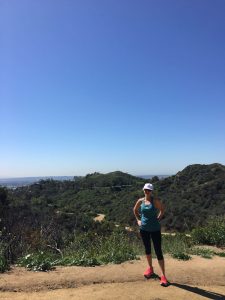 Jane Brook stopping along the way at Runyon Canyon, LA.

Los Angeles is a city of discovery and discovery tends to build up an appetite. The cultural diversity and access to fresh produce in LA has created a mecca for foodies from all over the world, mixing with locals at places such as Grand Central Market or the plethora of Farmer’s Markets that pop up every weekend. 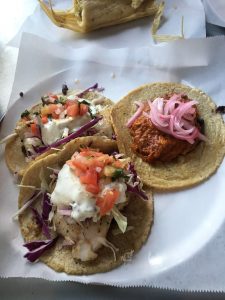 Some delicious and affordable eating in LA.

LA may have a reputation for being expensive but one of the most remarkable aspects is the level of quality across all budgets.

This is best evidenced by following Jonathan Gold’s treasure map of LA eateries (seriously, do it!). Gold is the first person to ever win a Pulitzer for writing about food and his 101 Best restaurants list is updated every year and ranges from the sublime and expensive Providence, to family-run taquerias where a dollar bill will get you a morsel of exquisite delight.

This year’s Melbourne Food & Wine Festival welcomes LA resident Ron Finley, who will be presenting at Theatre of Ideas. Since 2010 he’s been appropriating unused lots of land in his neighbourhood, South Los Angeles, and cultivating vegetable gardens sustained by local residents.  Ron’s belief that gardens build communities has blossomed into a quest to change how we eat.

You won’t spot these community gardens from the heights of a 747 descending into LAX for a two-hour stopover, but you will see their influence in the countless restaurants that now maintain their own gardens on-site throughout the city.

Communities are built around food and if we listen closely enough, their dishes will tell us stories of heartache, struggle and joy. Of finding things of beauty in the most unlikely of places. That’s what I found in Los Angeles and I’ve never been so happy to be so wrong.”

Jane has worked in the media and communications industry for some 20 years. Her expertise in leveraging media strategies, properties and events for maximum exposure and value has seen her work with some of the biggest Australian and global consumer brands. Jane has been called upon to undertake tactical media and sponsorship projects for the FIFA World Cup, Olympics and Asian Games and contracted to Chief Media Liaison positions for the Sydney and Beijing Olympic Broadcasting Organisations. After an early career in media and television production, Jane worked in China and Hong Kong before returning to Australia to set up her own agency which became one of Australia’s largest below the line agencies. She then established a marketing communications agency WMC360 which was acquired by Grey Global in 2004. She was one of the founders of Twenty3 Sport & Entertainment, a leading consultancy in the business of sport and entertainment and now runs her own consultancy, Brook Associates. Jane is also a board member of Harness Racing Victoria.

Melbourne Food and Wine Festival presented by the Bank of Melbourne is an annual state-wide celebration of Victoria’s food and wine industry that attracts more than 250,000 attendees to a diverse program of 200+ events. Run by a small not-for-profit organisation, the Festival has grown over its history from grassroots beginnings with only a handful of events in 1993, to now being recognised as Australia’s pre-eminent food and wine festival. In March, food and wine lovers indulge in events that fill Melbourne’s labyrinthine network of restaurants, laneways, lights-turned-down basements and dizzying rooftops and spill into spectacular regional Victoria.