“We’re going to Graceland, Graceland, Memphis, Tennessee…” Did we give you an earworm? Well, sorry, not sorry about that! Let’s begin our story… Australian expat Matt Harrington, his wife Cherie and their two children moved to Chiswick, London (on the Thames River), three years ago, via a three-month trip around the USA, including six-weeks in an ‘RV’ (recreational vehicle) in north-western USA, and Canada. Originally from Melbourne, Matt writes reviews on Trip Advisor under the name ‘MCH2312’, and also documents his travels on his WordPress blog, ‘The Harros Holiday Road’. Matt puts a lot of effort into his blog because he believes it is “a great record of our trips which I’m sure the kids [Zara and Jack] will enjoy when they reflect on their travels when they are older (and have to pay for themselves)”! When Matt saw a post on Facebook inviting Guest Travellers to contribute to Journeys To Come, he got in touch to see if any of his stories – including this bucket-list-inspired journey – would be of interest. In one word: YES! Let’s go on the road with the Harros to Memphis, for a day… 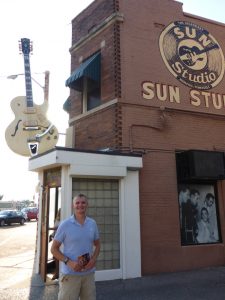 It was very hot and humid when we arrived in Memphis, in the late afternoon. We had driven in from Birmingham, Alabama, where we’d visited the International Motorsport Hall of Fame at the famous Talladega Speedway.  Our hotel, the Doubletree by Hilton, was opposite the worldwide headquarters of FedEx. Our two kids wasted no time in jumping into the pool, while my wife and I had a couple of cold drinks and watched a spectacular sunset. 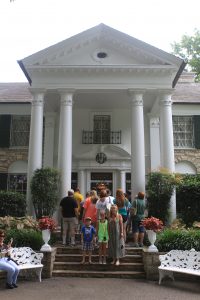 We awoke very excited because our first stop was Graceland – a major bucket-list tick!  It took only 30 minutes to drive 15 kilometres south of downtown Memphis, along Elvis Presley Boulevard, to Graceland. It was probably more rural and picturesque in Elvis’s heyday but today it is tacky and flooded with plenty of signage for Graceland. We headed to the visitors’ centre, located opposite the Graceland mansion, and bought ‘Platinum’ tickets, which sound more exclusive than they actually were. For $42 per person, we got self-guided tours of the mansion, the automobile museum, and his airplanes.

As you would expect, we were among thousands of people visiting Graceland.  We waited 20 minutes to be called to join a queue to board a shuttle bus and, while waiting, we managed to kill time watching a live broadcast of Elvis Radio which plays Elvis’s songs, 24/7! The bus took us, in just 30-seconds, across the road to the mansion and dropped us off in front of the Graceland mansion. It’s a bit of an overstatement to call it a ‘mansion’. It is not that large, but it is set within beautiful grounds. Headphones on and, with the obligatory photos taken on the front steps, into Graceland we walked…. 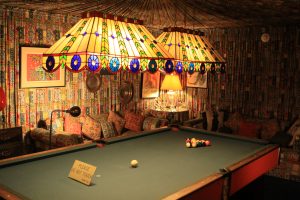 Wow!  It didn’t disappoint. The fantastic, 1970s interior decoration took me back, and other highlights were the underground television/bar and separate pool rooms (if only those walls could talk), and the famous ‘Jungle Room’ where Elvis recorded the bulk of his material for his final two albums.  The tour of the mansion is limited to the basement and ground floor, with no public access to the bedrooms on the first floor.

The tour then visited the car port where Elvis parked his many cars; his manager’s office (also still in original condition); his racquetball court (which has been converted into a showroom with costumes); and the Trophy building with all his gold records and memorable outfits of Elvis, Priscilla and Lisa. 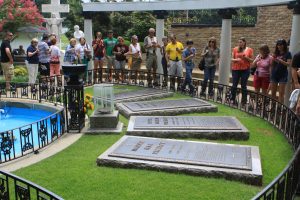 The final stop was the Meditation Garden, which Elvis had built. This garden is Elvis’s and his parents’ final resting place. Elvis was originally buried at a nearby cemetery but then, a few months later, he was exhumed and re-buried at Graceland.  The design of the Meditation Garden shows Elvis’s great taste. Apparently, he spent a lot of time there up to his death (and you could say is now spending a lot of time there!). 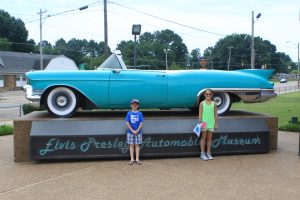 With the Mansion tour over, it was back on the shuttle bus and into the Automobile Museum.  Elvis had a wonderful car collection and it was great to see many recognisable cars, including the famous Pink Cadillac he purchased for his mother.  Next up was Elvis’ plane, The Lisa Marie, named after his daughter. We were able to walk inside the plane and I must say, it had a very impressive interior for its time.  Our two kids were really engaged during the tour and though they may not be Elvis fans, they now at least have some understanding of the history of the King of Rock ‘n’ Roll.

Following Graceland, we headed to the National Civil Rights Museum in downtown Memphis. The Museum is located on the site of the Lorraine Motel where Martin Luther King was assassinated in 1968.  The original motel has been retained, including his hotel room, and the museum built around the back.  It was a very detailed museum and well worth a visit for an insight into the civil rights struggle but, unfortunately, it didn’t quite capture the interest of the kids. It was lunchtime when we finished at the museum and we headed for the Central BBQ restaurant across the road. BBQ is the local cuisine and I had a great rack of ribs; one of the best – and largest – I have ever had the privilege of eating. Sensational! While I was a big fan of the smokey flavours, the other members of my family weren’t as keen.

Next stop was the famous Sun Studios, but we had arrived too early for the tour, so we headed to the 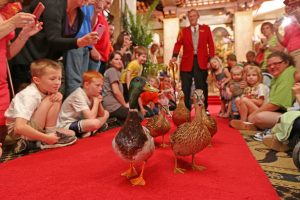 Peabody Hotel to watch the marching of the famous Peabody Ducks.  This is a tradition dating back to the 1930s (seriously) when the General Manager of the time had just returned from a weekend hunting trip in Arkansas. He and his friends found it amusing to leave three of their live, English, call-duck decoys in the hotel fountain. The guests loved the idea and, since then, five Mallard ducks (one drake and four hens) have played in the fountain every day.  In 1940 a bellman by the name of Edward Pembroke volunteered to care for the ducks. Pembroke was given the position of ‘Duckmaster’ and served in that position until 1991. As a former circus animal trainer, he taught the ducks to march into the hotel lobby, which started the famous Peabody Duck March.  Every day at 11am, the Peabody Ducks are escorted from their penthouse home, on the Plantation Roof, to the lobby via the elevator. They then march across a red carpet to the hotel fountain, before being lead back, at 5pm, to their penthouse.

Back to Sun Studios and the tour provided great insights into the history of the studio and finished in the famous recording studio where a long list of hits have been recorded by great musicians, including: Elvis, Johnny Cash, Carl Perkins, Ike Turner, BB King, Jerry Lee Lewis, and Roy Orbison.  It was an amazing feeling to be standing in the very room where such legends had recorded, particularly as the linoleum floor was original. They had marked the spot where Elvis recorded with a cross on the floor… cue the imitation with the microphone.  U2 also recorded three songs off the “Rattle & Hum” album at Sun Studios, and the drum kit in the studio was the one used by Larry Mullins – impressed!

Matt’s Top Five Tips for Getting the Most Out of Memphis:

When you wish upon a star