Guest Traveller Phil Brown from Melbourne was introduced to a company called Far North Sports Fishing (FNSF) by the fishing broker Angling Adventures, based in Geelong, Victoria. This November, Phil took his second trip with FNSF. He and a group of mates flew to Lizard Island in Far North Queensland, met a chartered fishing boat and over six days slowly made their way south while fishing at every opportunity, to Cooktown.  Phil describes the whole experience as “sensational”. Let’s catch up with Phil, find out the genesis of his angling passion, and discover what he brought up out of the big blue… 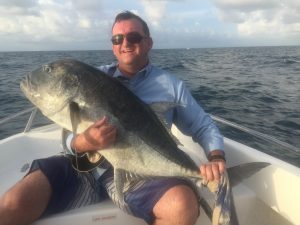 Phil Brown and his ‘GT’ catch (then release). 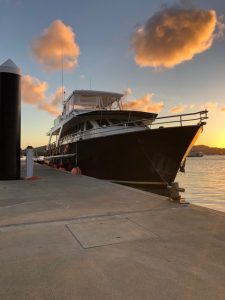 I definitely should blame my father. My passion for fishing all started from early-morning treks with Dad to the Cowes pier as a young, bright-eyed boy. My family had a holiday house for three decades in, what used to be, the sleepy, seasonal town on Phillip Island, Victoria. Just as Cowes is a lot bigger these days, so too are the fish I love catching.

For several years now, a group of my mates and I have headed north to warmer waters in Far North Queensland, to test our skill against the power of reef and open-water pelagic [being neither close to the bottom nor near the shore] species. Now, I’m not talking Marlin or the like. Even though these monsters give an epic struggle, it is the thrill of catching up to 35-kilogram speedsters on light tackle that we find creates the ultimate challenge. Light Game Fishing. 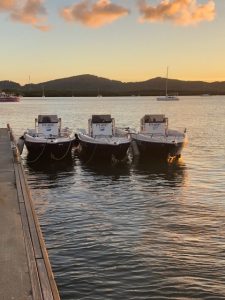 The three tender boats which the fisherman and guides took out to fish each day.

We flew in to Cairns and chartered a light plane to Lizard Island, where our live-aboard vessel was anchored for the night. This 68-foot mothership called Blue Martini is a three-level luxury yacht that can accommodate up to eight guests. A couple of unfortunate withdrawals, due to ill health at the last minute, reduced the number of fisherman to four. This meant, with four instead of six guests on board, we were very comfortably sleeping in our own cabins for the week.

Stepping on board Blue Martini, we re-acquainted ourselves with the familiar faces of the ship’s three crew and three fishing guides. An invitation to have a cooling afternoon swim in the bay was tempered by the ritual feeding of three-metre tawny and reef sharks from the back of the boat. We decided a cold beer was a safer option.

Blue Martini, the mothership, has three, 18-foot tenders called ‘Dories’ which we use to fish from during the day. It is decked out with all the fishing gear you need on the trip. You can bring your own gear if you wish, but we all decided to use the top-quality kit supplied.  Reels range from huge Marlin overhead reels, to small baitcasters and threadline models. There are dozens of lures provided, from poppers to sticks to metal jigs to bibbed trolling varieties. It’s always best to go with the recommendations of the guides because of their vast experience in these waters. The guides have all caught literally tonnes of these fish and their advice is priceless. 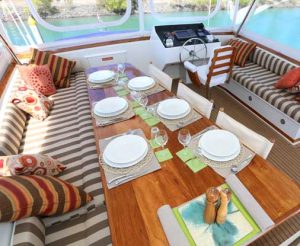 The most sought-after catch is the Giant Trevally (GT). The guides locate reef outcrops called ‘bommies’ which appear as islands of coral just below the water surface. As the current flows over these structures the bait fish are pushed against the side of the bommie. Now, a GT very well knows this fact. Attempting to fill its belly, the GT forces the bait fish up to the top. In their effort to escape, the bait fish cause the water surface to take on a rippling or ‘boiling’ appearance. This is where you need to accurately cast your lure!

A 35-metre cast under these conditions is almost certainly rewarded with a sudden hook-up. You can see the bow wave of water from the head of the GT closing in on its lure target. There is a spray of water and the line feels initially like it is snagged on the coral. But, the next second the reel screams and your rod bends violently under the weight of the GT making a run. The  line can easily strip off the reel. You need to keep the pressure on to prevent the GT running to the coral. A stalemate ensues and, with constant, arm-pulling pressure, you begin to slowly turn the GT’s head around towards the boat.

You know it’s a GT from the three lunges of the rod as it characteristically shakes it head sideways three times in an effort to dislodge the hook. After several minutes of the back-breaking excitement of alternating running, then slow retrieval, of line, you can see a flash of colour rising from the deep. The fish is then respectfully pulled from the warm water for the victor’s obligatory trophy-photo opportunity, and then carefully returned to the reef. Adrenaline-rushing fun! 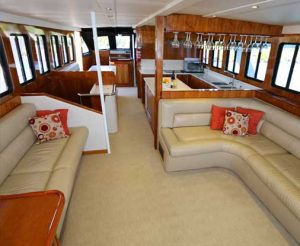 Giant Trevally are always returned after the fight as there are better fish to bring to the table; Coral Trout, Spanish Mackerel, Nannygai and Emperor make delicious eating. About 95 per cent of our catches are thrown back. Over 20 different varieties were caught over the week. Each of the anglers brought home over five kilograms of cryo-vacced frozen fillets, which still have that salty-fresh smell of the ocean when the pack is opened months later, thousands of kilometres away.

The trip’s highlights for me were the 1.5-metre Spanish Mackeral and the 20-kilogram GT caught on very light tackle. The GT was caught whilst fishing for coral trout on an outfit more suited to flathead than GTs! This catch was the most thrilling fishing I’ve ever experienced.

Another great highlight of the FNSF charter is the on-board chef and the food he prepared within the confines of a small – and swaying! – galley kitchen. The presentation was five star as he served mouth-watering creations from the daily catch. 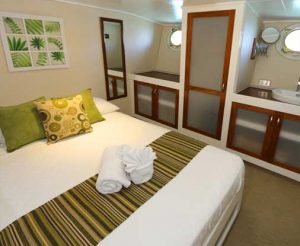 A tab for cold beers and great wine was settled at trip’s end. Everything else was included in their pricing. The crew go out of their way to make your trip fantastic; from endlessly serving drinks to releasing fish from lures.

After our fish-filled holiday, we made our passage, on Blue Martini, down to Cooktown where we disembarked and caught a light plane back to Cairns.

Phil’s Top Five Tips for Getting the Most Out of an FNQ Fishing Holiday:

Can you feel it where you are?