For Guest Traveller Sam Boon, Morocco had always been on his bucket list. The mixture of Berber, Arabic, and European influences, plus its proximity to Europe (a flight from Paris to Marrakech was the same length as a flight from his native Melbourne to Brisbane), meant that when he was trying to find a capstone destination for a recent round-the-world trip, Morocco had to be it. And, for Sam, it didn’t disappoint…

I organised to meet a fellow Aussie friend who happened to be in Paris at the same time and we both took the plunge into what was, for a both of us, a new continent, a new country, and a completely unfamilar cultural context. Even the view from the window of our plane upon descent made it clear that we weren’t in Kansas (or Victoria) anymore. Square, flat-roofed white or teracotta structures (complete with goat pens), olive and orange groves, dotted the landscape until, quite suddenly and dramatically, the Atlas Mountains rose from the desert plain to their ragged rocky peaks, still strewn and dusted with snow in midsummer. 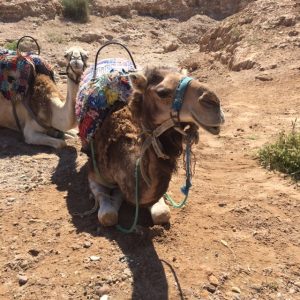 As the capstone destination of my trip, I’d decided to treat myself to a Premier Riad at The Royal Mansour. The Royal Mansour can be described as nothing less than a palace, where the King of Morocco brought together master craftsmen from across the realm to “celebrate architecture, ancestral knowledge and culinary arts as well as an innate sense of beauty which is part of the country’s heritage.” Well, wow. It’s difficult to do the place justice in words – from the ubiquitous citrus trees and jasmine which give the hotel its own natural signature scent, to the blend of Moroccan and Western architecture – perhaps it’s best to let the pictures speak for themselves. 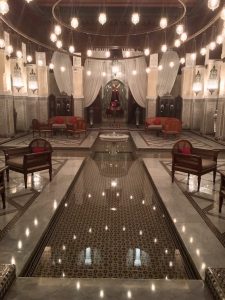 The centre of Marrakech is the Jemaa el-fnaa, the huge central square which, because it was Ramadan, was largely empty during the day, but came to spectacular, golden, vibrant, thronged life starting around 11pm. Along with the inevitable tourist touts, there was an abundance of the local delicacy – clay pot baked sheep’s head (complete with eyes – I decided my bucket list didn’t extend quite that far) but also stalls festooned with cardamom, saffron, almonds, olives, figs, dates, and family-run stands with plastic chairs serving the ubiquitous super-sweet mint tea from metre-wide silver salvers, poured from the highest achievable point to achieve the appropriate level of aeration. 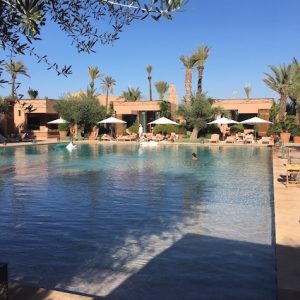 Inside the old city, the Medina, is a maze of (mainly tourist trap) jewellers, tanneries, clothing shops, rug shops, gilded lanterns and anything else Scheherezade may have dreamed of. Haggling is a must – but I have to say I didn’t bother. It’s a rite of passage to get lost in the Medina, with its tortuous and circuitous alleys, many ending in cul-de-sacs and dead ends; a local will happily show you the way out, for a price, of course. I must say that one venture into the Medina was enough for me. 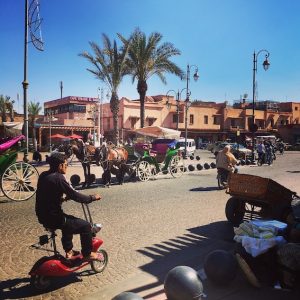 It was one of those experiences from which it is hard to choose a highlight, but my journey into the High Atlas mountains to have a five-course Berber feast in the open air, including olives with preserved lemon, couscous with vegetables, a traditional chicken tagine with yet more olives, a sweet, syrupy cake of almond flour, and mint tea. Once again, I think the picture speaks for itself here. 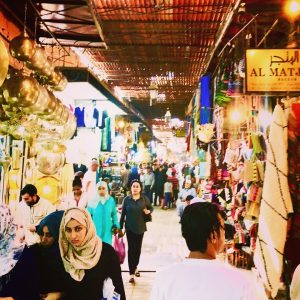 I had some reservations about whether Ramadan would be a good time to visit Morocco – these proved to be unfounded and unneccessary. And although I feel like I’ve made a dent in this particular item on my bucket list, the country is so multifaceted that I have no doubt I’ll be inexorably drawn back to the utter enchantment that is the Mahgreb. 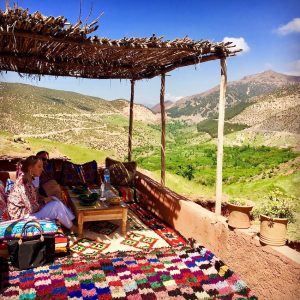 Looking forward to going back