Guest Traveller Roslyn Jolly is a travel writer for Audrey Daybook, Escape, Great Walks and thebigbus.com.au. Roslyn also keeps her own travel blog at scholargipsy.com. The fortunate recipient of the prize of a free stay on Picnic Island, located just off the east coast of Tasmania, Roslyn kindly sent back this story for us about her mini-escape last year with her family… 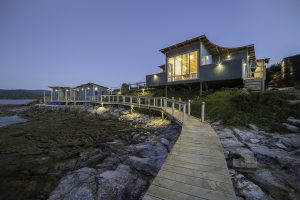 Picnic Island is a privately-owned sanctuary for birds and humans. For the birds, it’s a permanent home. Hundreds of seabirds have made it their base, and the island is honeycombed with the burrows of little penguins. For humans, it offers a temporary escape from the noise and hurry of city life. It’s a place to enjoy the romance of solitude and surrender to the healing touch of Nature. 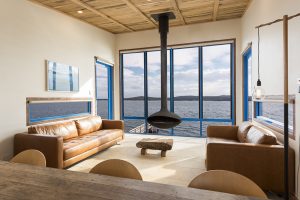 The humans perch on one corner of the island. A low-standing copper-clad building, weathered to the same grey-green as the scrub covering the sandy soil, houses them in simple comfort right on the water’s edge. Sundowners’ drinks, richly stocked canapé trays and delicious, home-cooked meals are shared in a lovely communal area that commands views of the Great Oyster Bay and the Hazards Mountains. 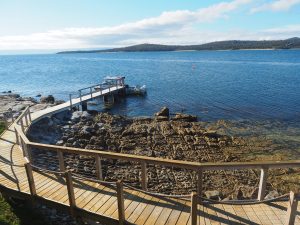 The rest of the island is the birds’ territory, where the humans can walk only on designated paths. There are so many entrances to burrows, and everywhere such a continuous hum of cheeping and chirruping, that it seems best to think of the island as one huge nest, containing dozens upon dozens of tiny rooms and corridors. At night, after the water taxi has departed and the electric generator has been turned off, there’s a kind of penguin peak hour, as the adults return to their chicks in the nests. If you’re lucky – as we were – you’ll witness this. 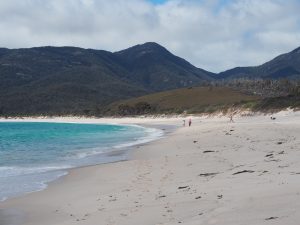 By day, there are many adventures to be had, exploring the Freycinet National Park. Established in 1916, it shares the honours with Mount Field as Tasmania’s oldest national park, and is a priceless repository of wilderness, biodiversity and natural beauty. A highlight for us was a boat trip to remote, shell-strewn Hazards Beach, followed by a guided walk across the isthmus to the world-renowned Wineglass Bay. From the boat we watched seals frolicking in the waters off Promise Rock. We had a picnic morning tea at the bay, feasting our eyes at the same time on the white sand, sapphire-blue water and orange-layered rocks. 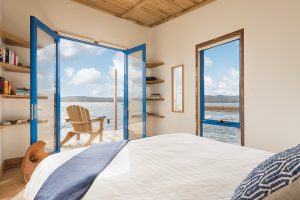 Picnic Island can accommodate a total of 10 guests across its four rooms (three doubles and one, four-bedded family room). Bathroom facilities are shared, so some flexibility and sense of adventure is required. The reward is a unique opportunity to share a natural habitat with some fascinating wildlife, while still enjoying every civilized comfort. 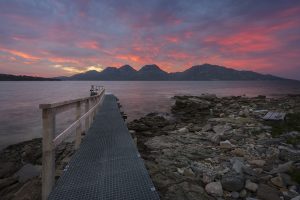 The island is available for independent group bookings or hosted retreats. We stayed there as part of an ‘Ultimate Freycinet Adventure’ and were delighted with both the activities and the food laid on by our hosts. During our off-island excursions we were lavishly treated to home-made cakes and sandwiches, while back at the island our hot breakfast and dinner were again freshly made. I was particularly impressed that, having notified them that our daughter is a vegan, we found there was a specially prepared option for her at every meal.

The only regret I have about our visit to Picnic Island is that we didn’t have more spare time to spend lounging on the chairs and beanbags outside our rooms. If I go back, I’ll make sure there’s at least one afternoon with nothing to do except dream away the hours, book in hand, watching the light change over the mountains and the bay.