Interview with Sally Bloomfield: “Bali, for obvious reasons, is one of my favourite places. It is the home of my business, Bloomfield Hotel, and I have had many happy times and memories with my family here. It is also my island sanctuary. I have been coming to Bali since the early 80s, so I have watched it grow and develop. What was once a simple, casual and relaxing place to visit has now become a world-class destination for restaurants, spas and hotels, not to forget fabulous surfing and shopping. Indonesia, as a whole, is so diverse; we have visited Orang-utan sanctuaries, gone diving in Raja Ampat, chased dragons in Komodo, as well as climbed a volcano or two! 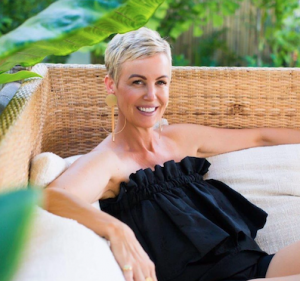 Top tip for holidaying in Bali

Enjoy the local culture! Aside from the obvious shopping, bar-hopping and water sports, there is a beautiful spirituality that, after living here for a while, we all hold in high regard and believe in. The religion here is mainly Hindu and is to be respected. Visit a temple, witness a ceremony, and embrace the beautiful, gentle, Balinese way. 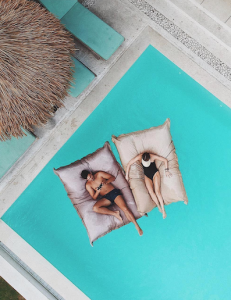 Pack light because shopping is great and the weather is always warm! I always bring the kind of resort wear/swimwear that goes from day into night as you never know where you are going to end up from a day at the beach, to a dinner in Canggu. I rarely wear heels here but always pack a pair, just in case. Oh, and I always pack my own pillow, and Bluetooth speaker; never know where you might break out in a dance!! 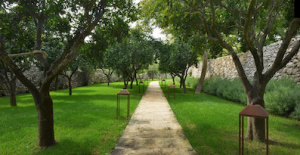 Last year was an amazing year of travel. I went to my friend’s fiftieth at his hotel, Masseria Trapana, in Puglia, Italy, and another celebration in Sri Lanka, travelling around for 10 days, and of course, Bali about five times. This year, I am looking to expand my hotel brand and so will be focusing more on destinations for inspiration such as Malibu, California, the Greek Island of Kos, and Tulum, a town on the Caribbean coastline of Mexico’s Yucatán Peninsula. 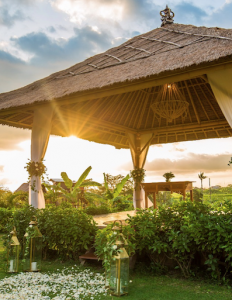 My son Nico was three and we were heading to Sri Lanka with a stopover in Singapore and I had left behind his bag of trucks (that was a disaster in itself) so I was running around trying madly to replace them… when I went to pay the cashier, I literally took my eyes off him for about 30 seconds and when I looked back he was nowhere to be seen. We lost him for about 45 minutes. We had other parents looking, loud speakers calling his name and were quite frantic – as you can imagine – thinking he had been kidnapped. Cut a long story short he wandered off and had boarded one of the trains to a DIFFERENT TERMINAL and thank God, an English couple saw him and alerted the authorities and they brought him back to us! I was so distraught I then left my bag and all the passports in a café but luckily they too were handed in!!!” 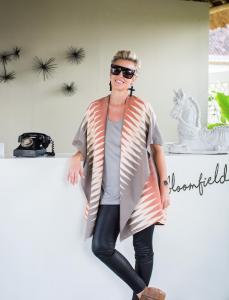 “I was born in Melbourne, Australia. My mother, Julia, is English and met my Australian father, Peter Bloomfield, when they both worked in London for Sir Terence Conran. They married soon after and had my brother Nicholas, then moved to Australia and had me!

My grandfather, Sir John Bloomfield, was a QC and then Minister for Labour and then Education in the Henry Bolte era. My grandmother was an accomplished sportswoman who was also a pilot and flew her own planes, one in fact doing loop-the-loops the day before my father was born.

I started my career in interior design, following in my father’s footsteps then, after a stint in London, returned home and ended up in the fashion business working for companies such as Esprit and Witchery, and spent nine years working in styling and production for a company called Style Counsel.

I then spent the next three and a half years working for “Harper’s Bazaar Magazine” as the Melbourne Editor and at that time met my future husband Ian Robertson who owned Q Bar nightclubs.

We then bought and set about renovating the Albany and Bloomfield Hotels in South Yarra, which we ran together for 15 years.

In 2012, we moved to Bali with our two sons Nico and Jules, (now 16 and 10 respectively) and bought some land and set about building, with the view to eventually open a hotel. Sadly, in 2014, Ian was diagnosed with cancer and died in 2016. I then set about completing our dream and opened Bloomfield Bali in Umalas – between Seminyak and Canggu – in November 2017.

I am now looking towards my next venture – opening another hotel this year near the beach!”