After the glitter of New York City, the tranquil life of Amish families in Lancaster, Pennsylvania and the sombre site of Gettysburg, also in Pennsylvania, it was time for me and my fellow-travellers on the Scenic Tours ‘Historic Trails & Southern Belles’ journey to head south. First stop, Tennessee.

Tennessee is known as the ‘Volunteer State’ as thousands of volunteer soldiers played a prominent role in the War of 1812 – especially during the Battle of New Orleans. The 32-month military conflict between the United States and the British Empire, its colonies and Indian allies, inspired the lyrics of the American national anthem “The Star-Spangled Banner”.

Tennessee has played a critical role in the development of many forms of popular music – including rock and roll, blues, blue grass, country and rockabilly.

Even if country music isn’t your thing, one visit to Nashville could easily convert you.

Country music began as a cross between cowboy and gospel in the early 1900s, but really took off in 1925 when a weekly barn dance called the Grand Ole Opry was broadcast live on radio. 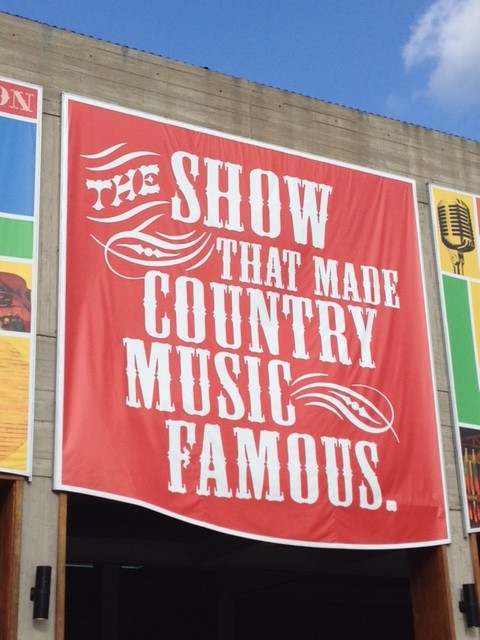 The Grand Ole Opry moved to the Ryman Auditorium in 1943 and as it developed, Nashville became America’s country music capital. Membership here is one of country music’s crowning achievements. A visit showcases legends and contemporary chart-toppers.

Early music legends include Hank Williams, Patsy Cline, Roy Acuff and The Carter family. They were followed by Dolly Parton, Garth Brooks, Reba McEntire and the Dixie Chicks. Carrie Underwood brought the house down with her rendition of Tammy Wynette’s “Stand By Your Man”.

Carrie was the first country artist to have 10 #1 singles off her first two albums! No mean feat. Just two weeks after she completed her sell-out world tour, her costumes and other memorabilia ended up in the Country Music Hall of Fame. Her rise to the top is quite incredible. Small town girl wins 2005 American Idol and the awards she has won since just go on and on. She was inducted into the Grand Ole Opry in 2008 and the Oklahoma Music Hall of Fame the following year. 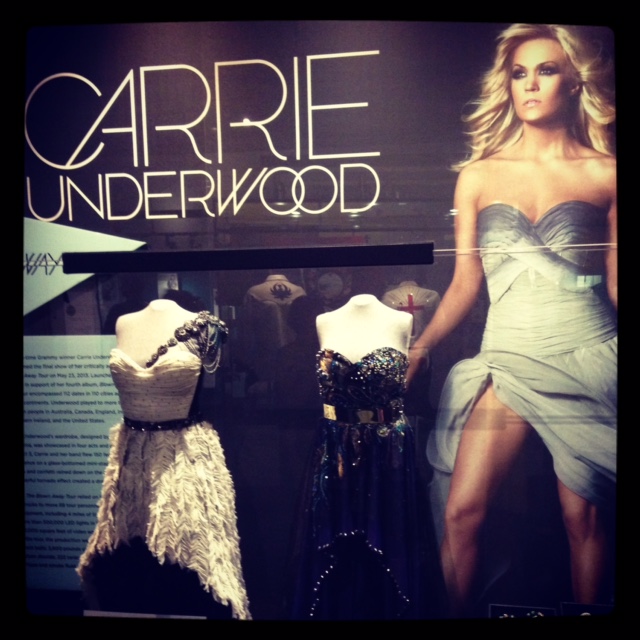 To be a member of the Opry is not just earned and forgotten, it has to be maintained by performing there throughout the musician’s career. The decision to bring a new act into the Opry is based on a combination of career accomplishment and commitment, and really comes down to relationships: the relationship between performers and their fans is crucial.

The Opry said goodbye to the Ryman Auditorium in 1974 to take up residence at the newly build Grand Ole Opry House. To keep everyone on a level playing field, backstage is a no-frills area. Eighteen dressing rooms are small and shared and only two have bathrooms. A circular piece of the original Ryman Auditorium is still there, so today’s artists can stand in the exact spot as the greats have before them. 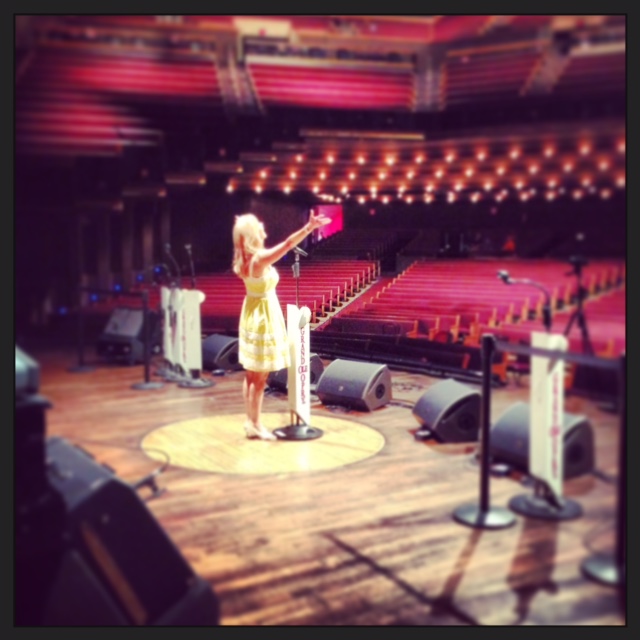 With Scenic Enrich, you will be treated to an evening performance at the Grand Ole Opry House, with a back stage tour.

I was proud to see Keith Urban’s name on a gold label. He is not only the first Australian to perform there, but the first non-American. His career is rocketing and Nashville is so important to this that he and wife, Nicole Kidman, are based there.

A visit to the Country Music Hall of Fame in Downtown Nashville is fascinating. Its aim is to identify, preserve and educate the evolving history and traditions of country music. Everything that has ever happened in country music is there, from the first guitars, to the clothing some of the biggest stars wore on stage.

You will see the scrap of paper Dolly Parton used to write “Jolene” on – her biggest ever hit. Elvis’ 24 carat gold Cadillac is there, along with a gold leaf piano that was a gift from his wife Priscilla.

You’ll be excited to know that during your Scenic Tours journey, you will be treated to a private performance by an acclaimed musician!

The fun continued when we jumped on board the General Jackson Showboat. The cruise on the beautiful 84-metre-long paddle steamer goes along the Cumberland River, taking in natural and historical sites. There’s plenty of entertainment and great Cajun food to enjoy.

As I discovered on my toe-tapping Scenic Tours journey, Nashville doesn’t have all the music glory for the state of Tennessee. Memphis shares the fame.

Some of the biggest stars in the music biz got their first break at Sun Studio. The unimposing little building was opened by Sam Phillips in 1950 and hasn’t changed a bit. Its sound swept around the world and changed the lives of thousands of hopefuls.

In 1956, Elvis Presley, Carl Perkins, Johnny Cash and Jerry Lee Lewis held the mother of all jam sessions. They are still known today as the Million Dollar Quartet. 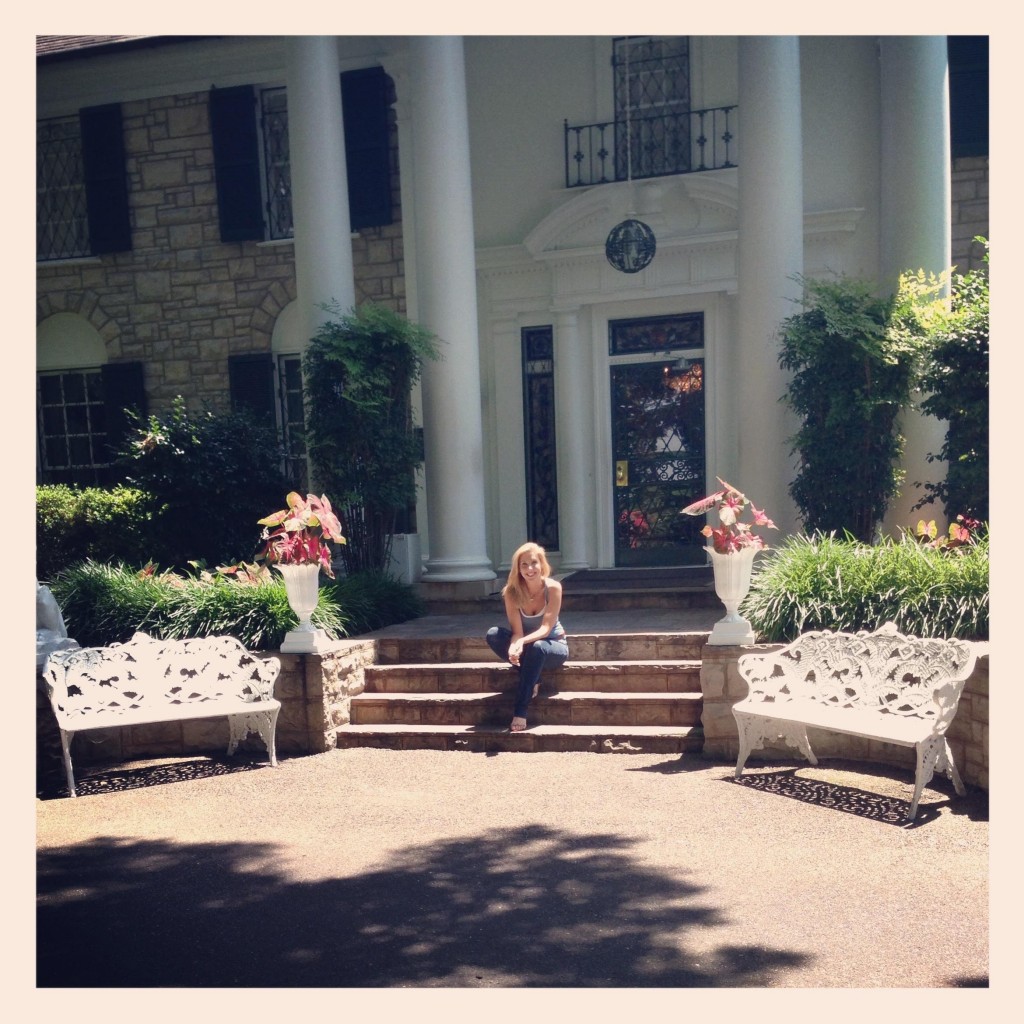 Elvis as a solo act set the world on fire as he combined blues, gospel, country and rock and roll. His first record That’s All Right set the ball rolling and it hasn’t stopped, 38 years after his death.

Elvis was born in Tupelo into a poor family and his musical and acting successes allowed him to relocate to Memphis, where he built the grand mansion Graceland at just 22 years of age.

It’s one of the world’s most visited private homes and pilgrims gain an insight into the private life of “the King”.

The living room has many family photographs and you can sense it was a sanctuary for Elvis, his family and friends. Visitors see bedrooms and the homey kitchen where chefs whipped up meals at all hours of the day and night.

The jungle themed room was his favourite; it’s loaded with exotic plants, animal prints, floor-to-ceiling shag carpet and a waterfall that continually flooded the room. 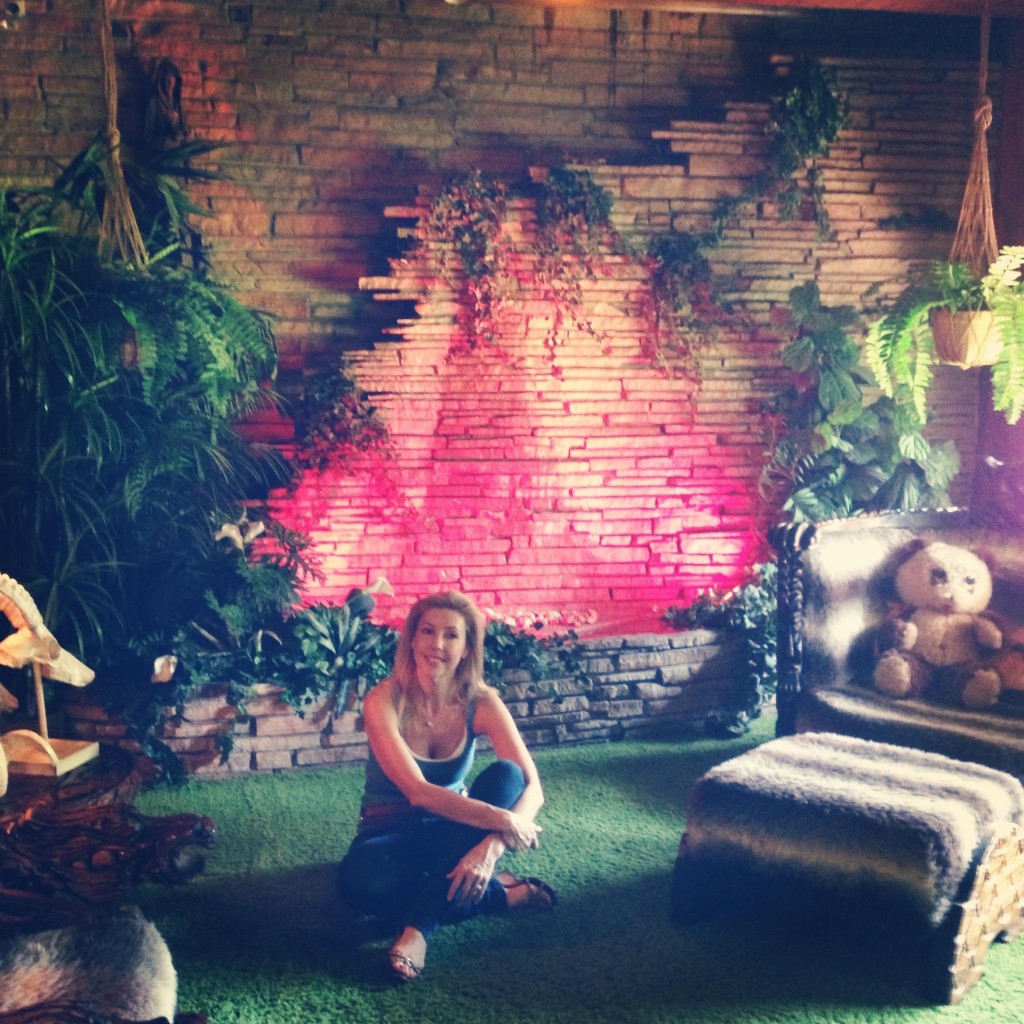 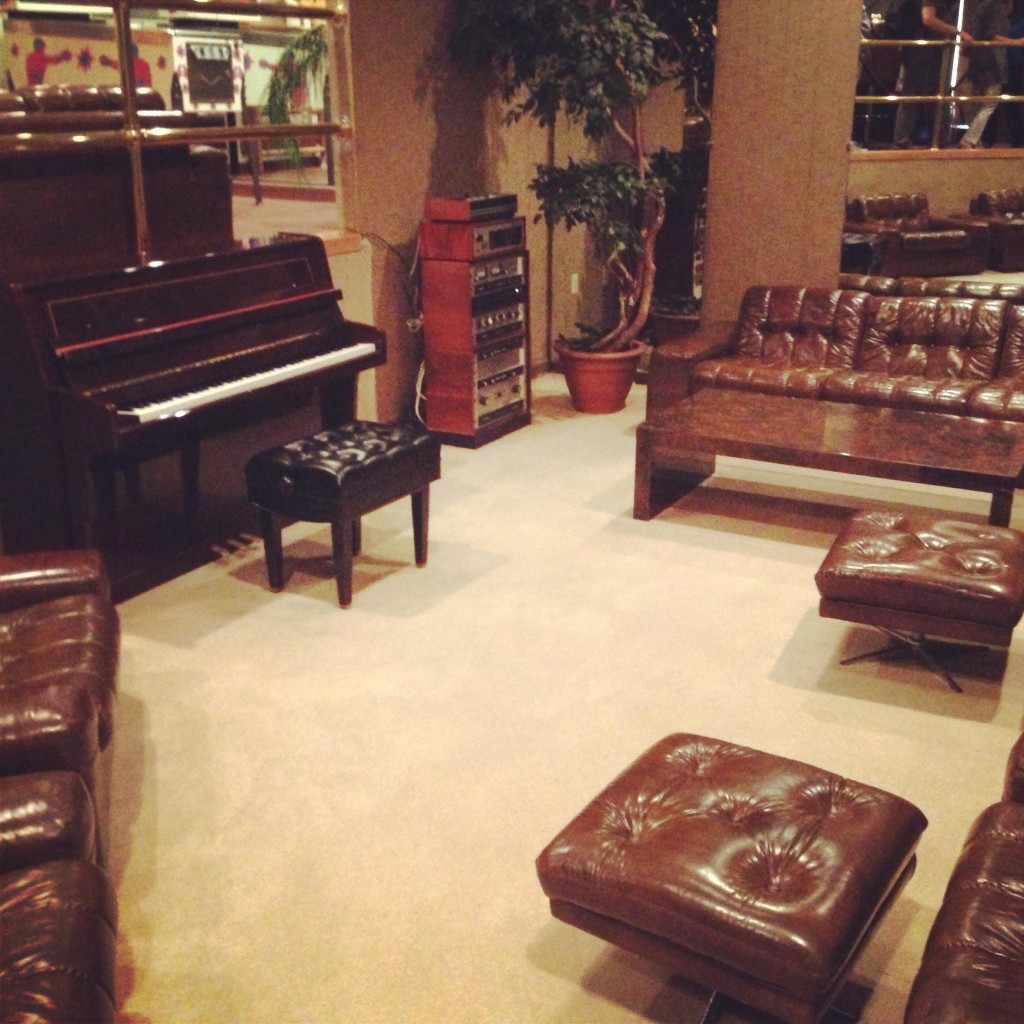 There is a racquetball building – Elvis was obsessed with the sport, along with karate. The karate garb inspired his famous jumpsuits. There are around 80 of those to see, along with his gold records that, sadly, were awarded after he died.

Elvis was laid to rest in the meditation garden, as were his parents and grandmother.

LOCATION
Nashville and Memphis in Tennessee.

If you’ve always hankered for a pair of cowboy boots, Boot Country in downtown Nashville is the place to go. They make sure you have the right fit and if you buy one pair, you get two pairs free! 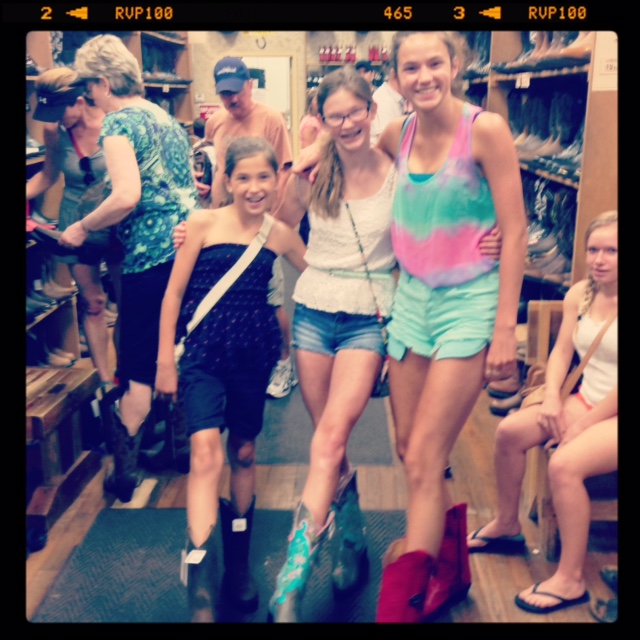