The Radical Travel Network is a company which runs tours through Scotland, Ireland and England. It is run by three Campbell brothers who returned from a backpacking holiday and decided to start a backpack business with a difference.

Tours are taken in Mercedes midi-coaches and passengers are aged between 16 and 35 – give or take. Accommodation along the way varies from cottages to castles, small fishing villages and lakeside hideaways.

15,000 people a year travel with Radical. With over 10 years of service, they have a solid reputation for reliability. Their guides are carefully chosen and have the ability to spin a good yarn.

Shamrocker Tours are operated by Irish whose aim is to have as much fun as possible while visiting well-known and out-of-the-way places.

A popular trip is from Dublin in the east to Galway in the west. Dublin is all about fun and is one of Europe’s most compelling cities. It’s not about museums and monuments and galleries – it’s where people live life to the full.

First stop is the small town of Kilbeggan in County Westmeath which is characterised by lakes and rich pasture land. Here you take a tour of Locke’s whiskey distillery the world’s oldest continuously licensed distillery. It began operation in 1757! The Irish word for whiskey is uiscebherthr which means the water of life.

Next stop is Clonmacnoise Abbey in County Offaly, typically flat and boggy. The abbey is Ireland’s most important monastic site. It has numerous ruins, towers, graves and Celtic high crosses. It has views of the River Shannon and is thought to have been founded in 548 as hub of worship for monks from all over Europe between the 7th and 12th centuries. Its population is 21!

Then it’s on to The Burren in County Clare. The rocky, limestone landscape is a stark contrast to the rolling, green hills associated with Ireland and contains countless monuments, castles and rare flowers. The Irish believe it is where their country emerged from the sea 350 million years ago.

Poulnabrone Dolmen is a three-legged, 5000 year old tomb sitting on The Burran. The ancient burial chamber is Ireland’s most famous.

During excavation in 1989, the remains of 25 people were unearthed, along with pottery and jewellery. Carbon dating suggests they were buried between 3800 and 3200 BC.

Lisdoonvarna’s mineral springs have been attracting people for centuries. Its other claim to fame is that is was the centre for basadóri or matchmakers, who, for a fee, looked at finding perfect partners for those looking for love. While it’s not as prevalent as it once was, each year the Lisdoonvarna Matchmaking Festival is held and is a great excuse for drinking, merrymaking and music in the local pubs.

Doolin is a beautiful fishing village in County Clare and people head there for traditional music, beautiful walks over the Burren and as a base for trips to the Aran Islands. Spelunkers go there and seem to spend their days crawling through dark caves and their nights in dark pubs.

Ballyvaughan is another small, pretty fishing village and is on a quiet corner of Galway Bay. It has great pubs, restaurants and good accommodation. A kilometre away is The Rath, an ancient earthen ring fort. The countryside is dotted with circular stone and earthen banks which were the basic family and tribal enclosures in Ireland for thousands of years.

Leamanegh Castle is a castle-cum-fortified-house with a solid five-storey tower house built by the O’Briens in 1480. Just over the tower-house entrance is a vertical shaft or murder hole from which a variety of things, such as boiling oil, was dropped on unwelcome visitors! That practice has since ceased.

In a country of such beauty Cliffs of Moher are spectacular. On the Atlantic coast on a clear day you can see the Aran Islands and the hills of Connemara in western Galway.

Majestically dominating the shore of Galway Bay is the 7th century stronghold of Guaire, Dunguaire Castle. It bridges thirteen centuries of Irish history from skirmishes, battles and sieges which make up its colourful past. Now between May and September you can visit the castle and enjoy entertainment based on the songs, poem and extracts from great Irish writers.

County Galway is a highlight of a visit to Ireland. It’s the second largest county after Cork and its landscape is extremely varied. Galway City is a delightful place with narrow streets, old stone and wooden shop fronts and good restaurants and pubs. It is one of Europe’s fastest growing cities and has large factories, bustling energy and a bohemian crowd of musicians, artists, intellectuals and young people, mainly due to the university.

Where: From Dublin to Galway in Ireland.

COST:
Shamrocker Tours three day Western Rocker and Southern Rocker both cost $399 per adult and $385 per student. If you want to go all out, do the 7 day All Ireland Rocker which is $989 per adult, $955 per student. They run all year.

Qantas flies daily to London with connections to Dublin starting at $2864 from Melbourne, $2873 from Perth and Darwin, $2875 from Brisbane, $2881 from Adelaide and $2885 from Sydney, per person. Prices include charges/taxes and are current at time of recording but may vary at time of booking. Seasonal surcharges and conditions apply. 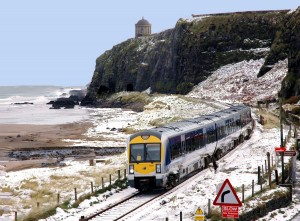 I recently met a lovely man, James Dunne, who’s the CEO of Rail Plus Australia (lovely AND smart!). He gave me a great tip for a tp train journey in Ireland, The Belmond Grand Hibernian. We are talking Orient Express Grand here. Ahhhmazing. It kicks off in August, so ask Rail Plus for details…toot toot!

Walking in footsteps of ancestors & her younger self, in London