It’s all about the monkey! February 8, 2016 is the kick off date in the Chinese calendar for their New Year and of course this years zodiac element and animal is… the Fire Monkey. So, I thought we’d celebrate those gorgeous primates with my top 3 travel experiences to get you up close and personal with these fascinating creatures. 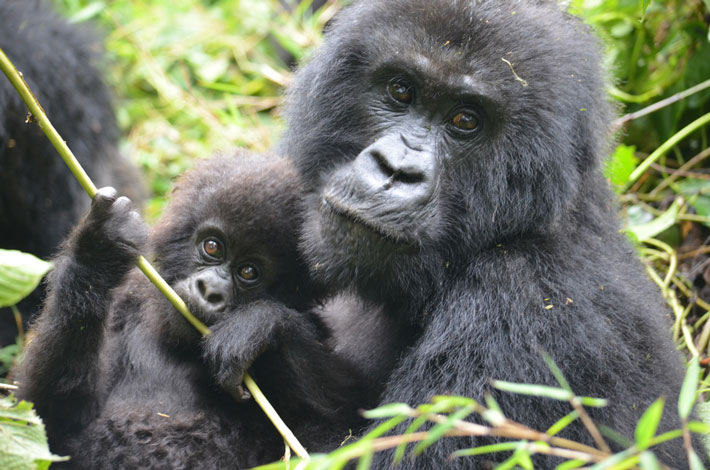 Gorillas. Who would have thought that people would include them on their honeymoon bucket list?! If that’s on your to do list, then look no further than East Central Africa. The republic of Rwanda in Africa’s great lakes region boasts a variety of mammals apart from gorillas such as golden monkeys, black fronted duiker, buffalos, elephants, hyenas and bushbuck.

Mountain gorillas live in the Mgahinga gorilla national park in Uganda and typically hang out in groups of 14 to 40. Amazingly, their just like human beings, displaying all the same emotions such as love, humour, aggression, curiosity and intelligence.

These inquisitive creatures are sadly dying out, with factors such as habitat loss, poaching, human disease and a turbulent history effecting their numbers. Volunteers are working to ensure the species don’t become extinct.

If you want to get up, close and personal with your 200 kilogram distant cousin, Peregrine Adventures has 9 day Primates of Rwanda tours out of Kigali. It includes twin share and a local tour leader, gorilla guides, trekking permit, game activities, park entry fees, most meals and transfers.

Just a tip, it’s recommended to leave a space of 7 metres so you don’t pass on human germs. Also, some tell tale signs of how close or far away you are from this primate include looking at bamboo which they feast on and suck sap from. You’ll also be able to sniff out gorilla droppings which have a very distinctive smell. 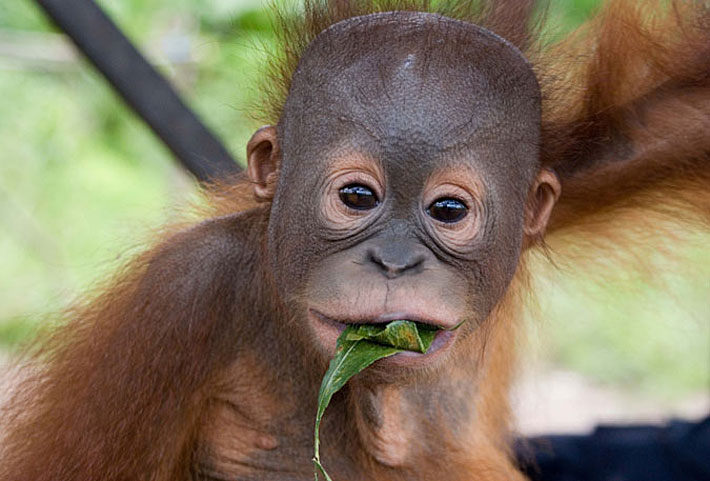 Orangutan is often pronounced incorrectly, it’s ‘tan’ not ‘tang’. Despite some mispronunciation, many an altruistic traveller would list this funky primate as their favourite. The Orangutan shares 97% of its DNA with humans and is considered the world’s most intelligent animal. They can be found in the rainforests of Borneo and Sumatra.

Logging and burning is rapidly affecting their habitat and are in perilous danger. Malaysian Borneo is a refuge seeking to keep these animals from becoming extinct. The Orangutans are in rehabilitation so that volunteers can teach them how to survive and fend for themselves. The duration of time can be anywhere from as little to 5 years to as many as 15 years. In the wild, they spend 6 to 9 years with their mother.

One remarkable story includes an Orangutan named Aman, quite possibly the largest male Orangutan in captivity. He received eye surgery after biting through an electrical cable. South African veterinarians restored his sight who had previously worked on cheetahs.

If you’re interested in volunteering, Way out Experiences offer 2 to 4 week volunteer programs with the Great Orang Utan Project. 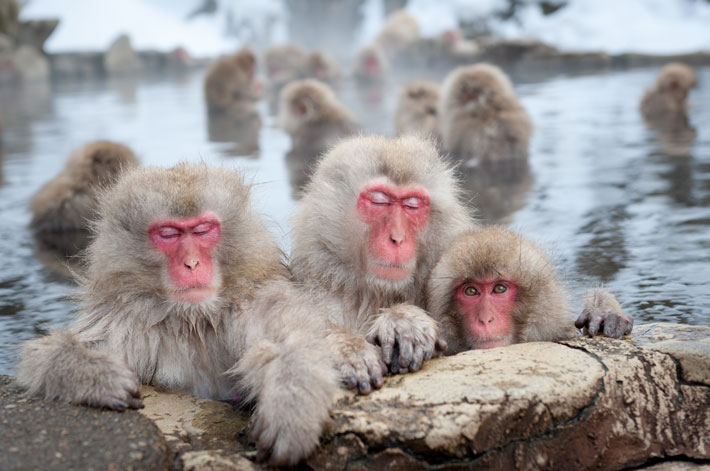 Nagano, 2 hours from Tokyo is where you can find the Japanese Macaque, the most widely distributed genus of nonhuman primates and historically depicted as the three wise monkeys- the ones who saw no evil, speak no evil, heard no evil.

Up to 60,000 snow monkeys reside in Japan’s hilly forests, able to survive bitterly cold winter months. They are reddish brown in colour and weigh up to 15 kilograms. They play like children with each other on trees. They snack on plants, insects, small vertebrates and in winter, feed on bark. During the day they forage for food and sleep in the trees at night.

Jigokudani natural park is known for its severe terrain, steep slopes prone to landslides, avalanches and little sunlight. Interestingly, the term jigokudani means “valley of hell”. For about a third of the year, all you can see is snow. Despite these sometimes frosty conditions, it houses 250 wild animals.

The monkeys often live in groups of up to 200 members. Talk about travelling in a pack! Whilst the monkeys might look all fluffy and cuddly, don’t be fooled dear traveller for they feel threatened by direct eye contact. You’re also told not to touch them or feed them.

There are plenty of traditional ryokans or Japanese inns to stay in the surrounding area. Jugokudani Wild Monkey Park Entry is open all year round. Go between December and March to see the best snow.