Canadians living in Melbourne, Sarah and Chris Bower, and their three children aged between three and eight, explored the South Island of New Zealand from a motorhome over 14 days over the summer break. Here is their story… 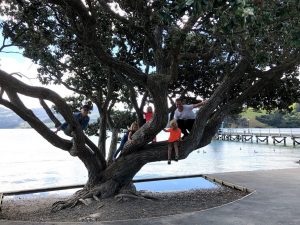 A hop skip and jump away from Christchurch, Akaroa is a charming, little town nestled in the hills of New Zealand. The French roots of the town made this Canadian family feel at home. Given Akaroa is only an hour from Christchurch, it was an easy first day of travelling after hiring and provisioning the campervan which took half the day, longer than we expected. While Akaroa offers a number of tourist activities, we arrived late in the afternoon and left early the next morning, so didn’t partake. 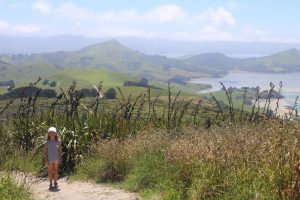 This is what I envisioned New Zealand to be like: ragged coast line, rolling mountains and lots and lots of sheep. From Akaroa, we jetted south and the drive ended up being the longest drive of the trip. There isn’t a lot of things to see enroute, but these views south of Dunedin were well worth the drive. We went for a two-kilometre, gentle, yet beautiful walk in Sandymount recreation reserve which is located at the top of the hills about a half-hour drive from Dunedin. After leaving this reserve, we went to Sandfly Bay for lunch on the beach. Getting to this beach involved a bit of effort with a three-year old (climbing down the sand dunes), but it was well worth it. A couple of sea lions joined us for lunch which added to the excitement. 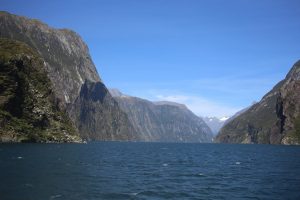 It is a time commitment to get to Milford Sound but, wow, it was worth it. We arrived late afternoon in a DOC [Department of Conservation] campsite, Cascade Creek (one of my favourites). The campsite was nestled in between these sharp mountains, had a little creek going through it with wild lupins (bright purple flowers) everywhere. We left early in the morning to drive into Milford Sound for our pre-booked boat trip, a three-hour trip in the Sound. We opted for a small (less crowded) boat which was a recommendation from another family. We lucked out; the day was beautiful with not a cloud in sight and the mountains were beasts towering above us. We left Milford Sound mid-afternoon and drove to Queenstown. Driving in the dark from Milford would have been very unpleasant. 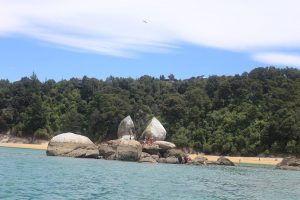 Split Apple rock is apparently the most photographed rock formation in New Zealand (according to our water taxi driver – hmmm), and is located just south of the Abel Tasman National Park. This national park was the unexpected surprise of the trip: it is stunning. We took a water taxi from Marahau to Anchorage (which is one of several bays inside the park) (<1 hour trip) where we did a four-kilometre hike (the trail was a big loop) and spent time on the beach before returning via water taxi. Gorgeous. 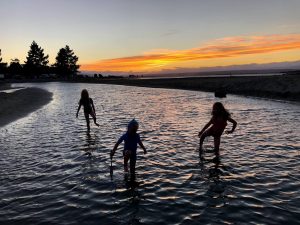 Minnow finishing at dusk in Nelson.

To avoid boredom on this trip, we embraced a number of activities. These included minnow fishing and panning for gold, etc.. We also stopped to see a number of natural beauties, such as waterfalls, rivers, and boulders. And we also made a number of tourist stops at treetop walks. These quick stops helped to pass the time and keep our kids happy.

Team Bower’s Top Five Tips for doing the South Island in a motorhome: