Earlier this month, I spoke to Juna Xu from Body+Soul about staying healthy and happy while travelling – without exercise. Here’s the story…

“Catriona Rowntree (aka Australia’s most travelled woman), reveals how she’s learnt to stay healthy and happy while travelling, despite her non-existent love for exercise.

We grew up with these big dreams of wanting to become an astronaut, Princess, or the Prime Minster. But aside from the Meghan Markles and Mary Donaldsons of the world, those dreams dwindled away when 30 years later we were hit with the reality of living the uneventful desk-job life.

And this my friends, is why Catriona Rowntree was, and is, smarter than the rest of us. Instead of longing to be part of Hollywood’s Walk of Fame, she had her sights set on a job that every other ordinary person would have to request time off for: travelling the world. 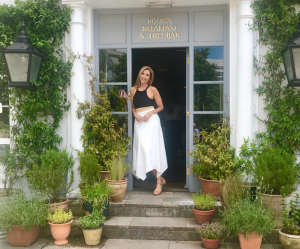 She’s claimed the title of ‘Australia’s Most Travelled Woman’ after taking us across the globe for over 20 years as a travel reporter for the country’s favourite travel show Getaway – the gig of a lifetime she unexpectedly landed after a “quick coffee with a mentor at work.”

But no matter where the city-turned-farm girl has criss-crossed across the world to, she strangely never EVER looks jet-lagged. To add to this, despite travelling to the world’s greatest cities where avoiding that carb-fest is not an option, she never looks like she’s packed on the holiday weight…something which we’re all too familiar with.

So right about now we’re thinking she wakes up bright and early for a 5am spin class, makes sure she ends the day with a 9pm HIIT session, and hits the gym on her lunch break. However, we are very wrong, because according to the travel Queen herself, exercise is actually not her friend at all.

“It’s really a decision to be active every day, this is coming from someone who is allergic to exercise…I totally hate it, but I love the little endorphin buzz after,” she exclusively tells myBody+Soul. 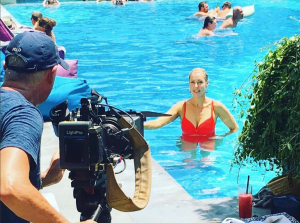 While you won’t see her pumping it out in an hour cardio sweat sesh, she does admit she tries to exercise “after a shower every morning” then manages to incorporate more enjoyable ways of moving throughout the day.

“A beginner’s cha-cha class on a cruise, a walk around the deck, a polo class at home (believe it or not), walk the stairs where I can, ride my old bike around the farm, and maybe even 20 minutes in a gym if I can find one. I’m not obsessive, but conscious of making a positive choice on a daily basis.”

It’s a good lesson for all of us who assign half our luggage space for activewear, only to never step foot inside a gym the entire holiday. #guilty

For Catriona, it’s all about balance, making every minute of each day count, and simply not forcing her body to do something she doesn’t want to do.

“Here’s the thing – I live on a farm, I’m a working Mum, I don’t live in some fantasy world of Yoga class three times a week. I just do what I can, when I can,” the Clarins ambassador explains.

“If it’s not fun, I’m not interested. If it’s too hard I probably won’t show up, and if it involves dressing up I’m most certainly in.” 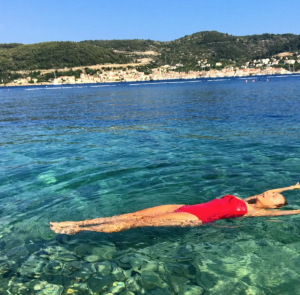 If you’re a huge fan of hers like us, you would’ve also noticed her skin never looks like pure crap after spending hours on a plane. That’s because she actually dedicates the effort and time into her very own pre, during, and post-skincare routine.

“My prep starts pre-flight and it all comes down to choices, difficult choices at that. Before I leave, I choose to start with water. I also like orange juice and tomato juice for their vitamin hit. I’d really prefer champers and a strong coffee but I know I’ll suffer for it when I land. It’s a tough choice.”

Yes, we hear you, but somehow always choose lacklustre skin and champers over a glowing vitamin hit.

“I also keep my skin refreshed and hydrated during the flight. I layer moisturiser everywhere really – lips, hands, face – and I spritz like a crazy woman right throughout the flight. It works for me. Not too much but just enough, and tough choices get me over that dewy skin finish line.” 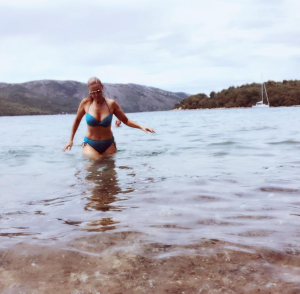 But her number one product she swears by “to keep dehydration at bay” is Clarins Beauty Hydra-Essentiel Moisturising Reviving Eye Mask, which is the first product she applies mid-flight.

And as for beating that uncomfortable travel bloat we all suffer from (after eating the plane food we clearly warned ourselves pre-flight that we wouldn’t touch), it’s all about avoiding the regular no-no’s, no matter what.

“No bread, no soft drinks and basically don’t overindulge. I know it’s easy to, but you pay for it later. Someone with a notebook is keeping score and is determined to keep your bloating karma in check.”

If you’re sitting at your desk reading this and wishing you could turn back time to become Catriona 2.0, she has some wise words for you: “you can’t mythologise the past, you can’t wonder about ‘what if’s.”

“Our mistakes are so valuable for our future, the grass is never greener. We have to appreciate every precious moment of the here and now.” #iconic”

To see the article online, go to bodyandsoul.com.au

All aboard Chicago's First Lady