Favourite travel destination is… London: great theatre, music, art galleries, bookshops and museums. Major priority is to visit the Tate, especially the Turner Gallery, the Tate Modern across the river and the National Portrait Gallery. Even if science turned you off at school, check out the National Science Museum at South Kensington: terrific stuff on medicine, and at the Wellcome collection near King’s Cross. London is a great science city and, as I’m usually there for professional reasons, I get to visit and have dinners with interesting colleagues and old friends. And it’s easy to get to Oxford or Cambridge for the day.

Top tip for holidaying in London

Go out of the main tourist season. Opening hours for museums may be shorter, but everything should be less crowded. Stay centrally, be prepared for tiny rooms, inconvenient stairs, drizzle, rain and cold. Walk, use the tube, and cabs are great. Check out what’s on via the internet: book ahead.

Something Peter always packs when he travels

Pack light and take dark clothes if big cities are the destination. I hate ironing and always carry a small steamer. If you’re off to anywhere exotic, visit a travel clinic well before you go. They’ll make sure you’re carrying any pills (broad spectrum antibiotics, anti-malarials) you might need.

The very far north and the very deep south. Big priority is to take a boat down to Antarctica before we’re too ancient. We’ve visited Finland, Sweden, Norway and Alaska, but have never been up into the Arctic regions; maybe start with a small-ship cruise around the north of Norway?

A travel disaster – or near-miss

Lucky so far: despite flying millions of miles, there’s been no life-threatening experience. Sometimes a checked bag doesn’t turn up on the belt: I always have the necessities for two days in a carry-on, but the “lost luggage” has always arrived within 48 hours. We once got a booking wrong and, flying to London from the USA, I got there the day after my one-day meeting. Once, in a landing 747, the plane suddenly went to full power and climbed fast away: Qantas pilot said they were bringing us in on a runway with a bulldozer in the middle! 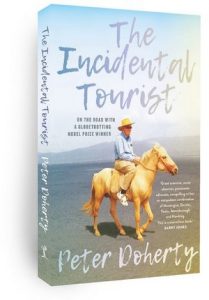 Peter Doherty shared the 1996 Nobel Prize in Medicine or Physiology for discovering the nature of the cellular immune defence. Based at the University of Melbourne, he continues to be involved in research directed at understanding and preventing the severe consequences of influenza virus infection. He has published five books for general readers, including the bestselling “The Beginner’s Guide to Winning the Nobel Prize”.

Peter’s latest book, “The Incidental Tourist”, was released on 1 September 2018. Melbourne University Publishing said, “Doherty’s dazzling schedule can leave his head spinning. So what happens when he lifts his gaze and asks: ‘What the hell am I doing here?’ Doherty has kept a journal about the far-flung destinations his work has taken him to for more than 30 years. His observations and discoveries in ‘The Incidental Tourist’ make for perfect armchair travel.”

Our Happy Place, in paradise

Discovering the city that Oprah made famous