Elliot Johnston travelled to Japan in February, visiting Osaka, Hiroshima, Kyoto and Tokyo. An avid Harry Potter fan, Elliot really enjoyed the Wizarding World of Harry Potter at Universal Studios Japan. He also loved having an opportunity to play piano in the Yamaha store, and took delight in sampling the many sweet, local treats, such as Pocky (chocolate-covered biscuits). Let’s join Elliot as he takes us on a tour of his highlights of his first overseas holiday, in Japan… 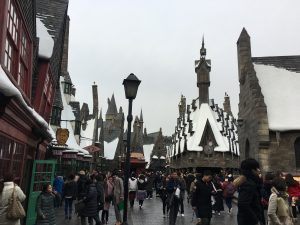 My favourite thing in Osaka was a full day spent at Universal Studios. I spent most of my time in the Wizarding World Of Harry Potter, where there is a recreation of Hogwarts Castle, The Hogwarts Express, and even Hogsmede. I tasted butterbeer, which was non alcoholic for the kids. In Ollivanders, I purchased a magic wand that I could use to do various tricks around Hogsmede. Dad and I rode on the Flight of the Hippogriff but found the Harry Potter and the Forbidden Journey ride more exhilarating. 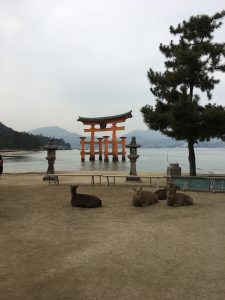 The famous torii at Itsukushima Shrine, a Ryōbu-style torii. See the deer relaxing in the foreground?

I recommend a visit to Miyajima Island (near Hiroshima). We caught a ferry over (free with our Japan Rail Pass) and spent a day there. We took our time wandering through the lovely streets of the village. There I found so many different foods on offer such as their specialties of oysters and sweet Momiji Manju Cakes. There were also many local craft shops, and beautiful shrines/temples to visit. The main attraction at the island is the Floating Torii Gate, which is the entrance to the Itsukishima Shrine. The gate looks like it is floating because at high tide, the water covers the bottom of it. There is also wild deer wandering around so make sure they don’t eat your return ferry ticket! 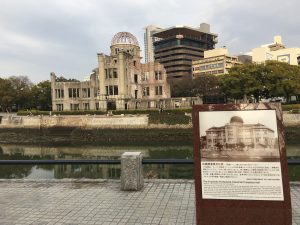 This building is The A-Bomb Dome, the skeletal ruins of the former Hiroshima Prefectural Industrial Promotion Hall.

My mum and I spent a very moving afternoon visiting Hiroshima. First we stopped at the A-Bomb Dome, which is all that was left of the Hiroshima Prefectural Industrial Promotion Hall after the atomic bomb exploded above it. We then walked into the massive Peace Park which is where all of the old village was before the bomb. There are many different memorials in the Peace Park including the children’s memorial (where you can find collections of paper cranes sent from all over the world) and the Bell of Peace that anyone can ring to remind us to never go back to the use of nuclear arms, or war. My mum advises you to take tissues. 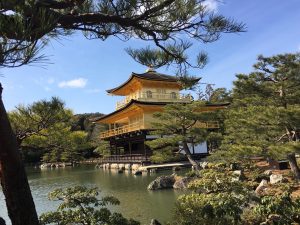 This is the Golden temple, located in outer Kyoto. It sparkles in the warm sunlight as if it was pure gold.

Kyoto was awesome. We stayed five nights in a self contained apartment, a few blocks from Nijo-Jo Castle. We caught the Randen Tourist Tram to Kinkaku Ji Temple (The Golden Temple). I really liked this temple because of the way the gold shimmered on the water and the beautiful gardens surrounding it. We also spent a day around the Arashiyama area. We walked through the bamboo forest (a very popular tourist spot) and continued up through the parklands for a wonderful view of the river. We stopped for a lunch of udon noodles at a traditional inn next to the river. We then crossed the Togetsu-kyo bridge and climbed up the mountain to feed the snow monkeys (yes, it was snowing). On the way home, we walked through Sanjo Dori, which is a really long arcade full of little food stalls. 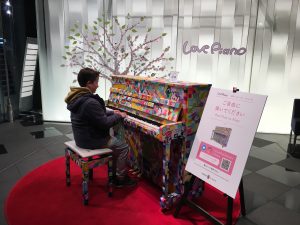 The Yamaha Store offers a piano for anyone to play if they would like to. Elliot took up the offer!

In Tokyo, I enjoyed the shopping district, Ginza. Lots of expensive stores like Gucci, Louis Vuitton and Swarovski were situated there. There was also a Yamaha store with a ‘free to play’ piano inside, so of course I had to bring Australia to Japan by playing ‘I still call Australia Home’. Overall, Ginza was very expensive, but enjoyable. The food in Tokyo was very good. We visited the Tsukiji Fish Market, and I recommend you do too. You can buy a wide range of seafood, fresh from the sea or you can sit in and watch the sushi chefs prepare an amazing array of sushi for your lunch.

Elliot’s Top Five Tips For Getting the Most Out of Japan:

The Royal Tour with a Midas touch

1,000 different ways of doing nothing