Rachael Bernstone, of Sounds Like Design, travelled with her family from Perth to welcome in the New Year from London. Her week-long series of posts resembled a Letter to Her Younger Self because she lived in London for four years in the mid 1990s, when the capital was buzzing with Britpop and a swagger that accompanied Tony Blair’s New Labour government. She worked in film marketing and went to parties and premieres; it was a fantastic time to be in London. Now living in Perth, Rachael has been a journalist and editor working exclusively in the field of architecture and design for the past 15 years. Here, Rachael shares her ‘then and now’ observations, and some discoveries about her ancestors… 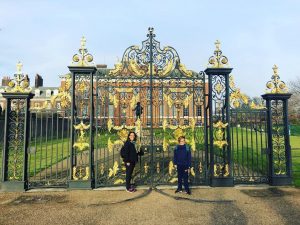 Rachael and one of her two sons.

The mood and outlook are very different from when I lived in London. Brexit is looming, there is a diminution of public services following 10 years of austerity, and a growing refugee crisis across Europe. In 2003, I returned to London on a Churchill Fellowship – CF applications for 2019 are open now, please get in touch if you’re thinking about applying and would like some help. The Churchill Trust awards about 100 Fellowships every year, across all disciplines. Mine was on Sustainable and Affordable Housing and it took me through the UK, Finland, Sweden and the USA researching government policies, not-for-profits, delivery methods and exemplar projects. You can read my report by googling my name and Churchill. 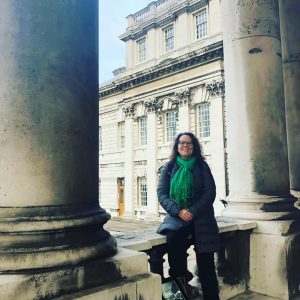 As well as being on holiday, and reflecting on how the fabric of the city has changed, I’m walking in the footsteps of my ancestors during this trip. One of my four times great grandfathers (great, great, great, great grandfather!) was Chief Secretary of the Naval Hospital at Greenwich, and several of his children were born here. They lived in an apartment in the building behind where I’m sitting in this photo. Last year, I purchased a series of hand-written letters from an archive, written by him and dating from 1802-1832; many of them were penned from here. We travelled downriver by boat to get to Greenwich, just as he would have done to get to Whitehall, back in the olden days. 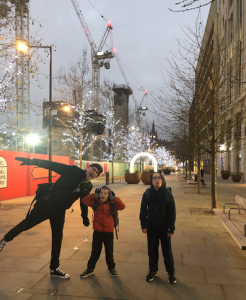 Now, a few observations about London in 2019:
– There is a plethora of new buildings on the skyline and they’ve changed the entire look and feel of the capital especially around the Square Mile; and
– We are staying near Granary Square, an urban regeneration project near Kings Cross, and it’s an interesting place to walk around and inhabit. 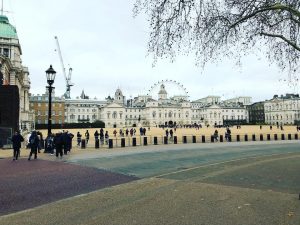 Last year, I became obsessed with family history research, and my quest to discover when and why my ancestors migrated to Australia. I discovered that my father’s family – the Bernstones at least – were Russian Jews who fled pogroms and arrived in Leeds in 1887. My grandparents and father moved to Melbourne in 1951.

But my Mum’s side came much earlier. There was a convict in 1826 (sent to Van Diemen’s Land, later known as Tasmania, but later pardoned when someone else confessed to his crime); a free settler master-weaver in 1831; a surveyor who arrived in 1860, and laid out parts of the Goulburn Valley (probably displacing aboriginal people, like Kate Greenville’s ancestors); and a navy sailor who arrived in 1871. This photo relates to the latter one, because I’ve learned that his father and grandfather were both chief clerks in the Admiralty.

I only realised as I undertook yet more family history research at Colin St John’s British Library that I’d been standing in front of what was once Admiralty Office – here in Horse Guards Parade – as we watched the changing of the guards a few days earlier. Even though I lived in London for 4 years, I’d never been to that place before. Never been interested in seeing that pageantry spectacle. Isn’t life strange, the way it life takes you places when you are ready? 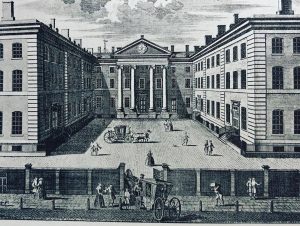 The Admiralty, on Whitehall.

My big realisation on this trip has been the way that buildings hold and keep our memories, for generations and over decades and centuries. That’s a point that’s made more blatant in England, where there is so much history and memory, but it’s no less relevant in a young country like Australia. Buildings matter.

Connect with Rachael via:

A hotel fit for a prince

Looking forward to going back