Thanks to her husband’s handy work at auctions, Kathryn Garland found herself, her husband and their two children, Henry, 5, and Emma, 3, on a trip of a lifetime last year: A white Christmas in the ski resort known as Whistler Blackcomb, in British Columbia, Canada. Let’s join them as they enjoy North American hospitality, holiday-season festivities, and skiing, all at their absolute best… 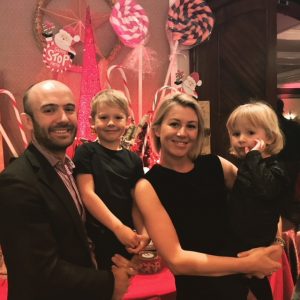 Being originally from the UK with children born in Sydney, for us, the reality of a white Christmas was a dream come true. Our children are finally at an age where travelling is easier and they can now clip their little feet into a pair of ski boots. Hurrah.

We set off from Sydney to Vancouver direct with Qantas. As an avid, Qantas-flying family, we chose the airline for its direct route, and reputation, but this soon backfired. What should have been a 16-hour flight, turned into a 26-hour ordeal with a multitude of complications leading to a lengthy and tiring delay – both ways! Apparently, this route is notorious for delays, as Qantas only flies directly to Vancouver for the ski season and summer months. The planes were old and it seemed the airline had no support when things went wrong. For this matter, I would seriously consider flying Air Canada in future. If you want to read the full story of this, you can find it here. The man who wrote the article was on both legs of our journey and, fortunately for us, our experience didn’t seem so bad! But was it worth it? Absolutely!!

We decided to add a week in Vancouver before traveling up to Whistler and we were not disappointed. Vancouver is one of the greatest cities I have ever visited with children.  Stop-overs are a common course for our ex-pat family and kids/hotels/cities are not the easiest of choices. Vancouver in December was magical. From the bright lights at Stanley Park, Christmas shopping at Granville Island, to the German Christmas markets, it was Christmas and Gluehwein galore. The weather was a bit miserable on days but there was still plenty to entertain the children, with activities such as the aquarium, science museum and Cirque du Soleil all happening in town.

We ventured to Grouse Mountain and Capilano suspension bridge, both about a 20-minute taxi ride from the city and definitely both a must-see. Grouse Mountain is absolutely stunning, with views all across British Columbia. Unfortunately, none of these experiences were cheap: It was over $100 for a family of four to ride up the mountain, and all activities are extra. We did visit in high-holiday season so prices were higher than usual and dropped after the New Year. At the top of the mountain, Santa’s grotto, real reindeer sledge rides, ice skating and tobogganing are all available and pretty spectacular.

Capilano bridge is on the way to Grouse Mountain, and you can easily cover both in one day. The suspension bridge is suspended, 230-feet high, over the Capilano River. It is nerve-wrackingly high and surprisingly wobbly! We went at night and saw the canyon lit with Christmas lights. It’s well worth a trip but, again, costly. It had all the Christmas gems: Mulled wine, live carols, (by a cool Aussie band!), and great gift shop.

As a city, Vancouver is seemingly liberal. As of the 1 January 2018, the use of marijuana was legalised and was already  a common occurrence out on the streets.  The city had a warmness to it and, despite the city’s huge homelessness problem and freezing cold climate, it felt safe and friendly. Our Airbnb was five minutes from the trendy Gastown area, known for its good shopping and restaurants. ‘The Flying Pig’, ‘The Cactus Club Cafe’ (we went two nights on the trot!), and ‘Chambar’ were all favourites of ours.

We found the best way to travel around with the kids was by taxi, mostly for its ease and the fact is was fairly inexpensive. The drivers were very knowledgeable and offered lots of advice. Taxis were hard to come by if you hadn’t called one so, grab a few business cards when you do find a taxi or, look for a taxi rank. There are is no Uber in Vancouver! It does, however, have a great rail system that runs around the city and to the airport but navigating it with children in tow was too much for us! 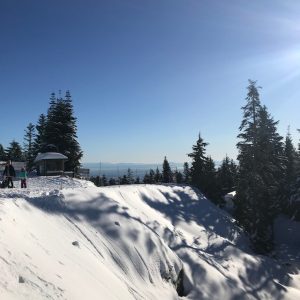 Picture-perfect, clear, blue skies were a highlight of the trip.

After seven nights in Vancouver, we did the two-hour drive to the Fairmont Chateau Whistler hotel in Whistler.  We were all taken aback by how incredible the hotel was. Not only was it blanketed in layer of white snow, the staff, the fires, and the Christmas trees made it every inch a winter wonderland. The Fairmont Chateau Whistler is a ski-in-ski-out resort, in Blackcomb Mountain, where your every need is met. At breakfast, you could request your ski equipment to be brought up to meet you at reception, saving lots of time and hassle. The hotel also runs shuttles to Whistler every half an hour. This is only a five-minute bus ride. Our children did four days of ski school on Whistler Mountain, from 8.30am-3pm. This made the mornings fairly hectic but, by 9am, we had dropped off the kids and made our way up the mountain ourselves. 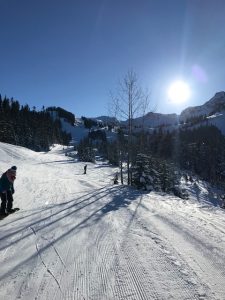 The epically-long ski runs seemed to go on forever.

Be prepared to layer up, as it is absolutely freezing on the mountain. Our kids wore double-layered thermal vests, leggings, fleeces and balaclavas, gloves and goggles. The first morning was a mad rush to get ourselves organised and find where we needed to be, but after day one, it was fine. The ski school was full of young cool cats on their gap year doing ski seasons. It was full of Aussies and Europeans with lots of warm tricks and cookies up their sleeves to distract and engage the children. We booked the early-bird ski school online, a few months prior to save on the cost, but adding an extra day through the hotel was easily done. 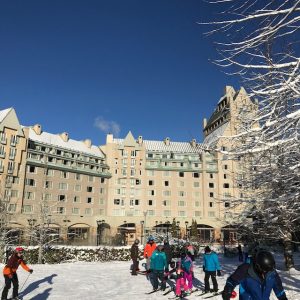 Christmas is obviously a prime time to be skiing so the slopes were busy and, as it was still early in the season, the snow-making machines were in full force. At first, I found the runs steep and busy but, after a few days of gaining confidence and exploring more of the mountain, we began to discover the wonders that are Whistler and Blackcomb: Picture-perfect blue skies, white mountains and epically long runs. 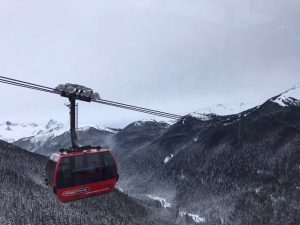 The peak-to-peak gondola takes you from the peak of Blackcomb to Whistler. It’s 1,430-feet high and the longest, free-span gondola in the world, and not for the faint-hearted. You can do this with or without skis on. It is included in the price of your lift pass and takes about half an hour. 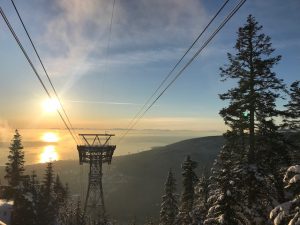 View from the gondola.

Again, as we were there during high season, the restaurants and bars in Whistler were very busy, especially around 6-8pm. Booking in advance is, therefore, essential. We pre-booked all our restaurants and ended up cancelling a few as the kids were so tired but it is worth doing, especially if you have older children. 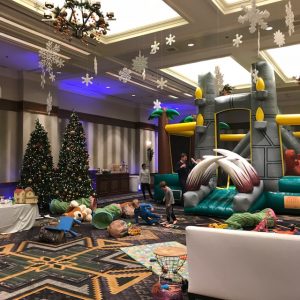 The best part of our Fairmont Chateau Whistler hotel was not only the gigantic, kids’ play-room, right beside the hotel lobby bar, and the daily gifts in our hotel room, but the 40-degree-Celsius outdoor swimming pool. Frozen hair, steaming pool, and a glass of champagne certainly took the edge off the sore shins and chilblains. This was, undoubtedly, my favourite part of the day!

Back at the hotel, after playing in the games room and swimming in the pool, the children could settle down to one of the Fairmont Chateau Whistler hotel’s featured entertainment: Either a movie or story time with Mrs Claus. They really did think of everything. The rooms were standard-sized and we bunked up in one room which had two beds and a tiny bathroom. There are obviously designed not to be hanging around in with so much at your door. On Christmas morning, a stocking was hung on every door filled with candy and games for the children. On Christmas Day, the choir was singing in the lobby, the snow falling outside and the fires burning all around. In the evening, the hotel put on a Christmas Ball. It wasn’t included in our package but it was worth the money. It was a very merry, North American, over-the-top-cheesey Christmas Ball with every detail taken care of.

I couldn’t recommend the Fairmont Chateau Whistler Hotel enough for that holiday-Christmas ski experience. It was set up to entertain children and look after the parents. It truly was a magical  adventure (albeit not the most relaxing holiday of all time!) but one to remember, and hopefully our children will, too. I’m pretty sure we will still be paying it off for years to come but it was absolutely worth every penny spent, every hour on the plane, and every frozen finger and toe!

Kathryn’s Five Top Tips for Getting the Most Out of a Trip to Vancouver and Whistler Blackcomb:

And the Oscar for the best goodie bag goes to…