Guest Traveller Ngaire Keane is a school teacher from Melbourne who had wanted to go to Nepal for such a long time that she couldn’t even remember why she wanted to go in the first place. This year, she decided to make that long-held dream a reality… 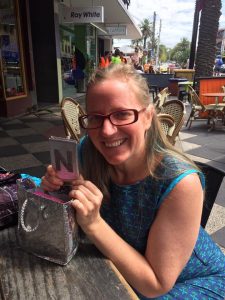 As an occasional yoga enthusiast and someone who wishes they were better at meditation, I chose to incorporate both into my trip and booked an 11-day sojourn for during my school holidays. One week would be spent at an ashram and the rest of the time in Kathmandu, the capital of Nepal. Heading to Vedic Arogya Ashram, I was taken off-road onto a bumpy dirt track and I briefly wondered if maybe I was about to meet my death. Not so. 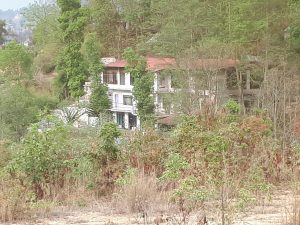 Set in Godawari [15km from the capital, Kathmandu, in the Bagmati Zone of central Nepal], the calm, peaceful retreat was run by a wonderful family. The owner gave me a brief run-down of what I could expect for the following week (meditation, yoga, daily walks and lectures) and I was taken to my dorm. Straight away, I met two very cool chicks: One Canadian and one Puerto Rican. In that week, I also shared the ashram with people from Germany, USA, England, Mexico and Nepal. 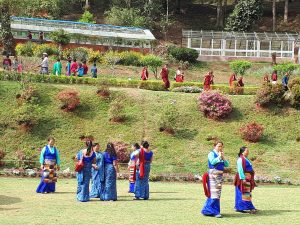 Getting up at 6am every morning isn’t my usual holiday routine but the beautiful surroundings and the bird song made it so much easier. I went there to challenge myself, and a challenge is what I found. At certain moments, I felt like I’d never done yoga in my life. There were still times, mid-meditation, where I found myself thinking about what I might be eating later, and the food was amazing. The vegetarian menu was diverse and incredibly tasty. Cooked with love. 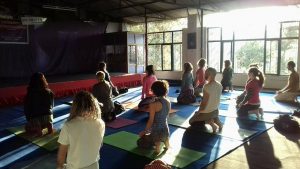 I learnt that, whilst I may practice yoga, I knew nothing about the philosophy of yoga and that the lifestyle is so much more than asanas [yoga poses]. Nepalese people are just lovely; so much calmness and appreciation of the simplicities and beauty of life. Whilst I may understand much of this, I don’t practice it as well as they do. 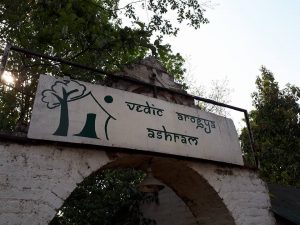 The rest of my trip was at an Airbnb apartment owned by another wonderful soul, Raju. He drove 45 minutes on his motorbike to come collect me, because he wanted me to save the taxi fare. He also took me to Monkey Mountain one day, bought me lunch despite me wanting to do that for him, and dropped me at the airport late at night. Who does that? The Nepalese do! His apartment in Kathmandu was a 20-minute walk from Thamel, the tourist heart of the city. 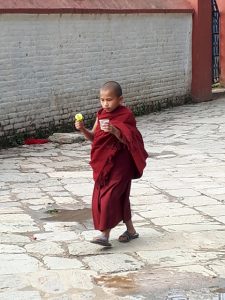 But I do love getting off the beaten track and I explored local markets, tiny, packed alleyways, and dined on street food. On seeing a big sign that there was an international tattoo convention on, I treated myself to my eighth tattoo with a mantra I have said to myself again and again over the years: “There’s nothing to fear but fear itself”. (Don’t tell my mum!) Did I get any trekking done? Not a scrap. Will I go back to do that? Absolutely. I promised Raju! 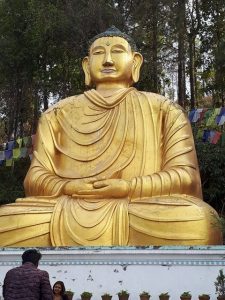 On the hillside above Godavari is an enormous golden Buddha image, created by local Buddhists who were inspired by the Japanese Peace Pagoda movement.

Since returning home, I have stocked up on fennel, cumin, cardamom and ginger! I’ve cooked recipes from the cookbook I bought at The Pilgrim’s Bookshop. I’m remembering to meditate before I go to bed. I’ve placed my Dalai Lama “Never Give Up” quote on my door so that every time I leave the house I’m reminded that compassion and leading from the heart is far more important than any ideas the mind comes up with. 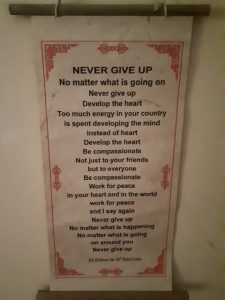 The Dalai Lama’s “Never Give Up” quote.

I’m so grateful for the experience I gifted myself. Please go to Nepal. Yes, it is sickeningly cheap but it actually made me a bit sad that such little monetary value was placed on some amazing artwork, craftsmanship, meals and human effort. There are still buildings that are a pile of rubble from the earthquake. 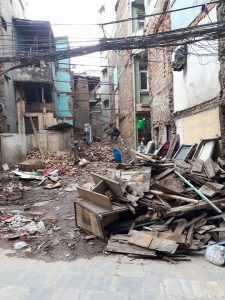 I’ve never been somewhere that you have to veer around the cow plonked in the middle of the road (because hitting it will send you to jail). You will be shown love and concern by strangers. You will see vibrant colours. You will see people who deserve so much more. Please go. You won’t regret it. 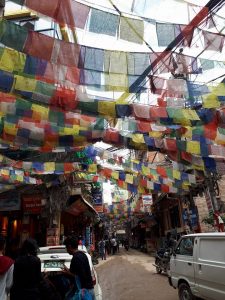